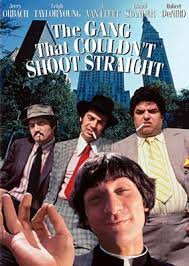 We interrupt this program for an Urgent Report!

This is Ernest Franks for Eyewitness News. We interrupt this broadcast to bring you exclusive, eyewitness footage of the carnage that’s just unfolded on a quiet street corner in the greater metro area. Police and Ambulances are racing to the scene. Our crack reporter, Vera High is on the scene. Come in, Vera…

Yes, Ernie, I hear you. And I’ve warned you about that “crack reporter” sobriquet before. You’re gonna hear from my union rep, if you don’t cut it out.

Sorry Vera. So what’s going on around that quiet street corner. Can you see any dead bodies?

No, Ernie, the mood here is one of a bunch of people who have cheated the hangman. Luckily, nobody was hurt.

Well, that’s not much of a story, Vera. No blood? Remember, hon, if it bleeds, it leads. No blood, no face time.

Ernie, you don’t understand. Police are just now starting to get a count of the spent casings, but it looks to me as if over a hundred rounds were fired at a city bus. It’s a miracle nobody was so much as wounded.

Perhaps you’d better fill us in on what happened, then Vera.

I hear you, Ernie. It seems there was an altercation on a city bus earlier today. One of the people involved in that dust-up used their cell phone to bring in reinforcements, if you will, and have them waiting at the next bus stop. When this person got off the bus, the friends opened fire at the bus. Clearly, their intention was to mow down everybody on board. The bus security cameras and a nearby traffic cam captured the action. I don’t know if it was bad aim, or dumb luck, but everybody on the bus survived, completely unharmed. The bus, of course, was not so lucky.

From the looks of the bus there, Vera, it looks as if maybe a hundred rounds were fired.

Do you know if the perps used assault rifles?

Ernie, there’s not really any such a thing as an “assault rifle.” From the video, we know exactly what the assailants used. They had a fully-automatic AK-47 and a Heckler and Koch MP5-N. As both guns were firing in full-auto, they are undoubtedly obtained illegally. The private ownership of fully-automatic weapons has been tightly controlled for decades. There are very few legal full-auto machine guns that the average person can purchase, and there’s a lot of paperwork and fees on top of that. I can’t imagine these gang-bangers got these guns legally.

Well, of course they should be illegal, but if you heard my exclusive Eyewitness News editorial piece last night, you’d know that I came out for a renewed ban on all those assault weapons and their dangerous extra-capacity clips.

Ernie, you might want to read something other than a telePrompTer every now and then. The Clinton Assault Weapons Ban had nothing to do with the kinds of guns used here today. They regulated only “semi-automatic” weapons. The kind that hunters use. And if you look at the stats, the gun ban had absolutely zero effect on crime stats both before and after the ban. Oh, and they don’t use “clips.” They use magazines.

Oh, sure, Ernie. Biff gets to be an “Ace” reporter, but you keep making “crack” jokes about me.

THANKS, Vera for that report. Over to you, Biff.

…if Wingman here, with Senator Buster – Senator, your thoughts on this dramatic shooting.

Well, Biff, I’m all for …’ our sacred Bill o’ Rights and American’s right to defend themselves, but these guns don’t belong on our streets. But I’ve been talkin’ with my caucus, and we’ve come up with what we think is a way to prevent tragedies like this in the wonderful neighborhoods in our inner cities.

Vera High, here Senator. I’m on the scene, live. Can you hear me?

I can hear ya fine, Miz High. Can you hear me?

Yes, Senator, I can hear you. The neighborhood I’m in is anything but wonderful. In fact,drive-bys happen here every day. It’s why my producer insisted I wear this bulletproof vest while I’m out here, risking my…my…self for this TV station. So, Senator, short of bulldozing this slum and replacing it with high-rise, luxury condos, what’s your plan to fix this problem?

Well, Vera, it actually combines three very Progressive ideas from our recent past. You remember when President Clinton earmarked funds for midnight basketball to keep our troubled youth-at-risk off the streets and on the courts? And of course, you know all about our inner-city needle exchange programs that have been a big win in the War on Drugs?

Look, Senator, Midnight Basketball was a colossal failure, with millions of taxpayer dollars spent to no avail. And that needle exchange program might keep a junkie or two from reusing a dirty needle, but it’s done nothing to stop drugs. If anything, it’s made it easier for junkies to get high.

Mizz High, you have to look at these program from the proper perspective. They have a great psychological benefit to the community. Besides, this time, this program isguaranteed to work. We gonna’ call it, “Midnight Armory.”

Well, Ernie, we realize there’s no way to stem the illegal flow of guns into our inner cities, as long as those folks at the NRA have anything ta do ’bout it. So we’re gonna concentrate on getting gang members to use what they have more intelligently. Our plan calls for a number of mobile gunsmithin’ vans that can head out in a rapid-response fashion to troubled areas. When they arrive at the scene, we’ll engage the gang members and explain to them that we’re here to help. We’ll service their weapons – field strip ’em, clean and repair them. then do somethin’ called sightin’ ’em in – why you wouldn’t believe how many of these weapons have sights that are out of alignment – and then direct them to our portable range for some accuracy drills. We’ll also have an ammo exchange program, so we can keep them from using cheap, roundball loads that have a tendency to go through-and-through, and exchange them for jacketed hollow-points that are much less likely to penetrate and take out a target behind whatever they’re shooting at.

Senator, Vera High here. What in the Hell are you people smoking in D.C.? How’s this supposed to keep us safer?

Mizz High, again, you’re not seein’ the big picture. If the gang members can shoot straight, they’ll be far less likely to spray a bus, trying to take out one victim, miss and put everyone at risk. This way, they’ll eventually be proficient enough to snipe from buildings a half-mile away. They’ll use less lead – that’s better for the environment. And we can get the guns off the streets and into the attics and on the rooftops where they belong.

But Senator, the effective range of an AK-47 won’t really let you shoot from a rooftop.

Right Ms. High, but that’s where our gun exchange portion of our program kicks in. We’ve recently come across a source of high-powered sniper rifles – U.S. Army surplus, ya know. So our plan is to allow the gang members to qualify on our ranges, then trade in thoseAKs and ARs to get some serious firepower in sniper rifles. We’ve even got a plan for those who qualify at the highest levels to trade up to a .50 cal. BMG. Now that’s some horsepower!

You people are crazy! a .50 cal round can put a hole clean through an engine block of an 18-wheeler! Don’t you understand you’ll turn the inner city into a combat zone?

Mizz High, it’s YOU who don’t understand. Don’t bother me with this silly little “facts” of yours. I can produce studies from our office that can refute anything you wanna say. This is not about results. This is about making the people believe we are Doing Something About the Problem.

Ernest Franks here, Senator – so this outreach would help the gangs be more efficient?

Yes, Ernie. And of course, we’ll let the gangs know we’re not there to judge. Or to entrap them. Hell, they may find once they get to know the cops, they may like ’em. And look at it this way – if we find any marksmanship superstars, we can always offer them a job with the police. That’ll get ’em off the streets for sure. And you know, we’ve been pushing to lower the requirements for getting a badge, because there just aren’t enough people willing to be shot at in their work.

Well…I guess it would make sense to get the best shooters jobs with the police, so they’d be on our side…

NO ERNIE, you IDIOT. I said…oh, nevermind. Senator. Don’t you think that this program will do nothing more than make the gang members more efficient killers?

Mizz High, you have to look at the numbers. Nothin’ we do is gonna stop them fromshootin.’ Fish gotta swim and all that. But this program works – we get a place to use some o’ that stimulus money. An, Hell, if they do end up killin’ somebody, well, you can’t get more “shovel-ready” than that, right? We get the support of the greenies – they’ll love it that we’ll have them using fewer bullets, which will equal lower levels of lead in the environment. The gun guys like Brady and Bloomberg will love it, since eventually, all the gang members will be wearin’ badges. And if they don’t all get gigs with the pigs, they can always hire the trained gang-bangers as private security. Think of what it will do for the peace of mind around there, when gangs go from drive-bys to sniper attacks.

But Senator, no one will be brave enough to venture out-of-doors!

Ex-ACT-ly. And when the neighborhood’s nice and quiet, we can slap ourselves on the backs and call it another “win-win” for Progressive policing. It’s the perfect plan.