The 300 Blackout round is certainly well-liked by certain members of the editorial staff here at TTAG. It’s a great round for a number of reasons – namely it will work in a standard 5.56/.223 AR-15 with only a change in barrel needed. Every other component in your standard AR-15 build remains the same. If you make the switch, you get a very capable dual purpose round. Full power 300 BLK 123 grain ammunition matches the ballistics of the 7.62x39mm AK round and in a 9 inch barrel has 37% more energy than 5.56mm M855, and 9% more than 6.8 SPC TAP 110. In fact . . .

If your mission calls for quiet work, switch to a 220 grain subsonic bullet and you’ll be putting suppressed rounds on target that are just as stealthy, but hit harder and penetrate deeper than the 9mm rounds fired by the MP5-SD – the defacto standard for silent killing. The true beauty of the 300 BLK round, though, is that an operator doesn’t need to make a decision one way or another before deploying – he simply takes a loadout of both types of rounds and can adjust to mission profile changes on the fly.

So, with all those benefits, why aren’t more people using 300 BLK? Simple – a lack of available ammo. While no ammunition is particularly easy to find these days, you’re a lot more likely to run across the odd box of 9mm or 5.56 mm than you are a box of 300 BLK. And when you do find some, you’re likely to pay exorbitant prices for supersonic loads. As for subsonics – well – good luck with that.

The good news is that reloading for the 300 BLK is pretty easy. Being a rifle round, you will start with a cost-effective single stage press (or maybe a multi-station turret press).  We’ve done a few segments here at TTAG on reloading. Aside from my two-part post on the Cost Benefit Analysis of Reloading (Part One and Part Two) Foghorn did a nice post back in April 2012 entitled Reloading for Dummies with really nice step-by-step pictures and a video. And Foghorn’s video centered on turning down .223/5.56 cases to be used to load 300 BLK.

The whole turning-down-the-brass thing has been the main thing keeping me from reloading 300 BLK. Assuming that I can find the time to do the actual turning, there’s also the case prep that needs to be done after you have shaved the brass down. Quite frankly, this has always seemed to be more trouble than it was worth. I checked out prices of new 300 BLK brass and even if you could find it, I generally could purchase boxes of loaded supersonic rounds for not much more than the brass would have cost me.

While trolling Gunbroker, it occurred to me that I could probably buy 300 BLK brass online (duh!) and that led me to Carolina Brass’s auctions. Carolina Brass is a small, family run company by husband and wife John and Jayme Bowman that procures used brass, cleans, inspects, de-primes, and resizes a number of different calibers. They don’t have a website, but they do have a Facebook page and you can always find them with a number of ongoing Gunbroker auctions. All of the brass has the same headstamp which helps with consistency.  The brass is first cleaned and polished including a final polish in stainless steel to get that new car shine.  It is then deprimed using a Dillon Universal Depriming Die and trimmed to 300 BLK length using a Dillon RT1200.  All cases are trimmed to no longer than 1.355 +/- .003 to fall within SAAMI specs, which should allow you to reload several times before having to do any trimming  yourself.  The cases are then swagged using a Dillon Swagging tool to remove the military crimp from the primer pocket.

What sets Carolina Brass apart is the next step they take – they actually resize the brass for you using a Forster Bench Rest 300 AAC Blackout Die so the brass you get is ready to be reloaded – no need for you to lubricate the cases and do the sizing yourself – all you need to do is prime the case, pour the powder, mount your bullet seating die in the press and go to town.

Besides doing the resizing, Carolina Brass uses a Wilson Case Length gauge during the processing operation to spot check the case neck and overall case dimensions 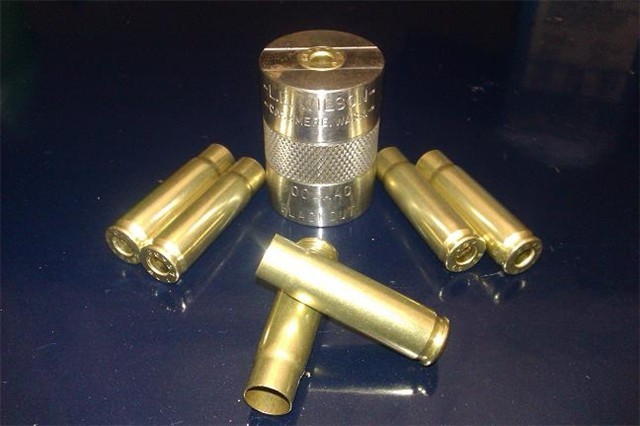 Now, this certainly sounded to be too easy to be true, but I was willing to give it a shot.  The brass shipped quickly and I ended up paying a little over $100 for 500 pieces, which worked out to about .20 per case.  I used my RCBS hand primer to seat small rifle primers in about 50 or so cases and then used my Hornady lock and load Auto Charge Scale to meter precisely 9.9 grains of Winchester 296 powder. Since I was interested in evaluating the performance of my Thunder Beast 30P-1 suppressor and my new AAC 9 inch 300 BLK upper, I used Sierra Match King HPBT 220 grain bullets.  I cranked out a few dozen test rounds and headed off to the range.  They performed flawlessly.  All of them were under the subsonic threshold and I had no failures to feed or extract.  Looks like we have a winner here.

If we look at supersonic rounds, the reloading picture gets even brighter.  120-125 grain bullets are a lot less expensive and while they are not going to be cheaper than 5.56 ammo, you can get fairly close while still shooting a larger and more powerful round.

In my mind, the major stumbling block for 300 BLK acceptance has been the lack of availability and cost of factory loaded ammo.  This is not going to change in the short term, but folks like Carolina Brass make the reloading process ridiculously easy.  For not a lot of money (see Foghorn’s post referenced above) you can buy what you need to put Carolina Brass’s offerings to use.  300 BLK is a great cartridge, reloading is not as hard or scary as many people think, and Carolina Brass has made the job even easier.

Update: I exchanged emails with John, one of the owners of Carolina Brass after he read this article and he shared the following additional information with me – mainly to address my comment below about the lack of a website:

“I wanted you to know that we purposefully don’t have one  [website] because we like to have the interactions with our customers…we like to learn more about their shooting experiences and we know it sacrifices, possibly, some sales, but its worth the knowledge and the personal service for us.  We can always sell direct and then people can avoid the auction wait, and we recently have made most of them 1 day or fixed price to alleviate the time issue.”

Makes sense to me given the family business philosophy here.  It also highlights one of the great things about being in the firearms business.  A lot of the people who start or work for companies in the firearms area do it because they are truly committed.  You may, for example run a convenience store, but chances are you are not all that passionate about selling groceries and lottery tickets.  You start a firearms business, its probably because you love guns and really look forward to interacting with others with the same interests.

Feel & Function * * * * *
The brass looks good and on the four dozen or so rounds I tested, I was able to prime, drop powder, seat bullet, and go.  No failures to feed, fire, or extract.

Overall Rating * * * *
The only way this could get better would be with an online store and fixed prices.  I get the whole auction thing, but besides having somewhat variable pricing, you may need to wait a day or so for the auction to close before your brass can ship.  The problem of course is that this is a small family operation and therefore is limited as to how much they can process.  Here’s hoping that their business builds to the point where they can hire some help and become a real player because they make a good product.