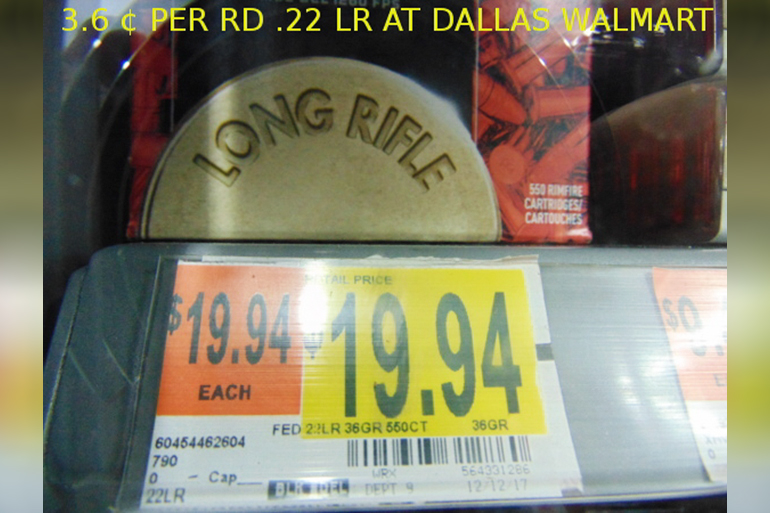 The .22 LR bubble is well and truly over. With the Trump presidency now almost a year old, gun owners are no longer worried that ammunition might be hard to find in the indefinite future.

I visited the WalMart in Northern Dallas on the corner of Marsh Lane and Frankford Rd recently. It’s had more ammunition available, at lower prices, than the others I have visited in Arizona and Texas.

As seen in the photo taken on December 20, Federal bulk packs of 550 rounds of 36 grain high velocity .22LR cartridges were priced at $19.94. According to my calculator that’s 3.62 cents a cartridge. And that’s the lowest price I have seen in a store since the end of 2012, when the great .22 ammo bubble began inflating after Sandy Hook.

The Obama administration’s attempt to use the tragedy to enact strict gun control ultimately failed. But for years, with tens of millions of gun owners determined to stockpile a few hundred or a few thousand rounds of .22, the shelves were bare and middlemen made a killing as the price of .22 ammunition doubled, redoubled, and redoubled again. The question now is, how low will .22 ammunition prices go? Stockpiles of .22 ammuntion have been accumulated millions of gun owners over the last five years. And millions of new gun owners have been created. My hunch is that most gun owners won’t continue to build their stockpiles, but will keep some “just in case.”

On the other hand, at a recent gun show in Yuma, Arizona, I saw 10,000 rounds of .22 ammunition for sale for $420, or 4.2 cents a round. The price was reduced from six cents a round after I told the sellers that WalMart had plenty on the shelf locally for 4.2 cents.

In the mean time, production of .22 LR production has been increased by about 20%. There are bound to be ups and downs in the market. Metal prices and energy prices are considerably lower now than they were in 2008.

Here’s a new prediction: Before the end of the Trump presidency, we’ll see .22LR on sale for 2.5 cents a round or less. It may not be common, but it will happen. I’ll report it here when it happens so we can all say the “good old days” are back.