So many great choices are out there for the concealed carrier! We fought, argued, debated, and cussed, but finally we narrowed it down to 20 concealed-carry firearms that make the Concealed Nation honor roll. We are pleased to present the 2015 edition of the Top 20 Concealed Carry Firearms . . .

If you find yours notably absent, it’s because we’re human. But you should let us know why yours should be included in the comments below.

These are presented in no particular ranking order — simply our selection of 20 of the best concealed-carry guns we’ve run across. Released in 1994, the GLOCK 26 has become the most highly sought after concealed-carry handgun on the market. In a pinch, this semi-automatic can accept larger Glock magazines and it can be altered easily to allow for right-handed/left-handed operators.

Did you know? Episode 15 of the television series “Law & Order: Los Angeles” featured a polymer frame murder weapon that alternated between a GLOCK 16, GLOCK 17, and a Glock 26 throughout the episode (source: IMDb). We’ve reviewed this firearm extensively in a prior article you can find here. Our opinion? It’s a good, reliable and cheap single-stack concealed-carry pistol. Chambered in either 9mm or .40 S&W ammo, people have largely taken to it like a duck to water.

Did You Know? Agent Coulson from Agents of S.H.I.E.L.D. actually carries an M&P Shield. (source: IMDb) The P220 Carry is a much more concealable version of the famous SIG SAUER P220. All the capabilities of an single action/double action full-size combat pistol packaged perfectly for self defense. Added bonus? It’s chambered in .45 ACP. The big alternative (though not the only one) is the SIG SAUER P250. This 9mm pistol provides DAO operation perfect for fast reaction times. Available in stainless steel or blued steel finishes.

The Ruger Lightweight Carry Pistol was designed from the ground up to be an extremely reliable sub-compact centerfire pistol. At this price point  — this little gun is accessible to anyone in the market for a good, concealable pistol. A Kahr CM9 can fit nearly anywhere on the concealed carrier. It truly is built for everyday carry. While the PM9 features some largely aesthetic improvements over the CM9, the Kahr CM9093 is truly a fine, well put-together DAO pistol with an overall length of fewer than 5.5 inches. It sort of looks like that gun Harrison Ford’s character carried in “Bladerunner.” Well, Beretta is bringing geek sci-fi to a whole new level with the Px4 Storm Compact. Its modular design allows the user to configure the pistol to suit his carry style best. Best of all, it’s one of the few pistols that can be chambered in .40 Smith & Wesson and actually perform well with it. Equipped standard with either five rounds of .38 Special, .357 Magnum, or even 9x19mm Luger, this double-action revolver is ideal for single-hand grip. Whether it’s an everyday carry or an emergency back-up — this J-frame-sized revolver was designed for precision, reliability, and force. Single-stack .45 ACP capability in a concealed-carry gun? We’re in. The XD-S .45 ACP with a 3.3-inch barrel length definitely provides a great platform for putting large caliber rounds downrange. Best of all — its ergonomic shape handles the torsion and stress extremely well. Worth every penny. For those who don’t dig larger calibers, it’s also available in 9mm. Taurus, a Brazilian-owned manufacturer of firearms, has always come under a lot of scrutiny. Most recently, there was a massive recall that included many of their concealed-carry pistols. So, why the heck are we including the Gen 2 111? Because, as we’ve seen it thus far — it’s proven itself to have extremely reliable performance at a great price point. And it’s also extremely popular amongst ccw holders — a double-stack 12+1 capacity 9mm handgun shorter than 6.5 inches in overall length for $300. Kimber is known for its special edition and custom models of 1911. And plenty of concealed carriers insist on carrying a full-size Kimber or even Kimber Pro Carry. For those who may have a more difficult time concealing a full-size 1911 in their waistbands, Kimber offers the Solo and the Micro. The Micro is great because it stays on the 1911 platform — so if you’re a 1911 aficionado, you can stay with a form factor you’re familiar with and get a single-action trigger and thumb safety. It measures less than 5.6 inches in total length and features a six-round magazine. Some concealed carriers will carry no less than a 1911 chambered in .45 ACP. To these people, this model epitomizes classic American ingenuity matched with a harrowing record of service. And for those people, Armscor’s Rock Island Armory offers a compact GI Standard chambered in .45 ACP. Compact but not too compact, it manages to stay faithful to the stopping power of the round and offers a manual safety, while being slightly more concealable than its bigger brothers. No frills, no chills — this is a bare-bones aluminum-frame Argentinian .380 Auto known for its reliability and service with pilots in South America. Its rise to popularity has largely been from its price point — but that’s quickly been followed up with good range reviews and decent magazine capacity.

Did You Know? The Bersa Thunder .380 is used by the Ecuadorian Air Force. 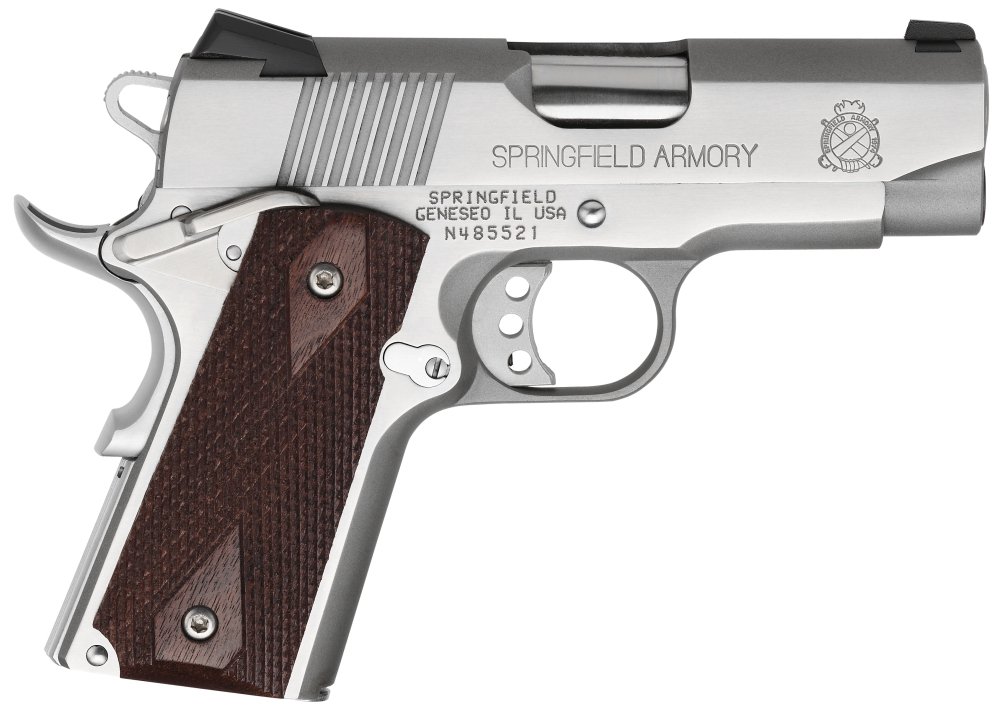 If Rock Island Armory and Kimber aren’t your thing but you absolutely demand a 1911 in a compact form factor, Springfield’s got you covered. The Springfield Ultra Compact Custom Carry 1911A1 features a whole host of high speed match-grade performance parts in a classic 1911 fit with a great trigger pull. The Ruger SP101 double-action revolver has been a mainstay in the concealed-carry community for quite awhile. With a five-round capacity, it’s capable of delivering a frighteningly accurate high rate of fire for a revolver. A lot of people look down on Kel-Tec for largely silly reasons. This firearms manufacturer has found a great home in the world of conceal carry with their .380 Auto P-3AT. Measuring around 5 inches in total length, this sub-compact pistol is perfect for everyday concealed carry. For those uninterested in a pocket pistol .380 Auto, Kel-Tec also makes a similar model chambered in 9mm (PF-9) or .32 caliber. Best part? The Kel-Tec P-3AT is one of the few extremely reliable firearms available for less than $350. The Walther PPS — chambered in either 9mm or .40 S&W — has been out on the market so long that people have forgotten about it. That’s unfortunate because the Walther PPS has proven itself to be one of the most consistent, stable, and well functioning single-stack compact firearms on the market. It features some surprisingly awesome nuances — like an ambidextrous magazine release and super smooth striker-fire operation. Night sight options are available. The GLOCK 43 is GLOCK’s answer to the market demand for single-stack concealed carry pistols chambered in 9mm. It took awhile for GLOCK to get to market with a 9x19mm variety but the GLOCK 42 (.380 Auto, 9x17mm) certainly made plenty of headway into that demand. By the time GLOCK 43 arrived, it came out at the right price point for concealed carriers to embrace and its performance was generally well received. Good Guy Ruger makes an affordable, high capacity centerfire pistol that’s widely available for all AND makes a compliant version for states that limit magazine capacity. It’s one of the reasons why Ruger does so well in the concealed carry market — they understand what the majority of concealed carriers are looking for. With an overall length of fewer than 7″, it is compact but not sub-compact. The Ruger SR9C is a pistol with excellent precision and a good record of performance. Crimson Trace makes an easy-to-attach laser for the trigger guard. Just like the Beretta Px4 Storm, the Beretta Nano was built with a modular design. This allows the concealed carrier to choose the best configuration for his or her hands. Having the ability to make a right-handed pistol a left-handed one is invaluable. Having a pistol that actually performs up to spec and comes in at a reasonable price (on top of this) is amazing. Extremely customizable, durable, and lightning quick — the GLOCK 19 has well earned its reputation as one of the premier full-size concealed carry pistols on the market. Almost no list of notably awesome pistols is complete without at least a nod to the GLOCK 19.

Did You Know? In 1986, the police department of Colby, Kansas became the first law-enforcement organization in the United States to formally adopt the GLOCK 19. They were given a generous discount at $300 per pistol and still carry them to this day. (GLOCK, P.M. Barrett, 2012)

Offering all the sleek, high performance operation we’ve come to expect from Walther, the Walther CCP in 9mm is easy to holster and even easier to put on target. MSRP – $469

A beautifully ornate yet mechanically simple firearm renowned the world over by discerning concealed carriers — it fits conveniently in almost any small pocket holster. MSRP – $500.

Did we leave out the concealed-carry firearm in your waistband holster? Tell us about it in the comments section. Who knows? Maybe it’ll earn itself the review it rightfully deserves and join the ranks of most popular in 2016.