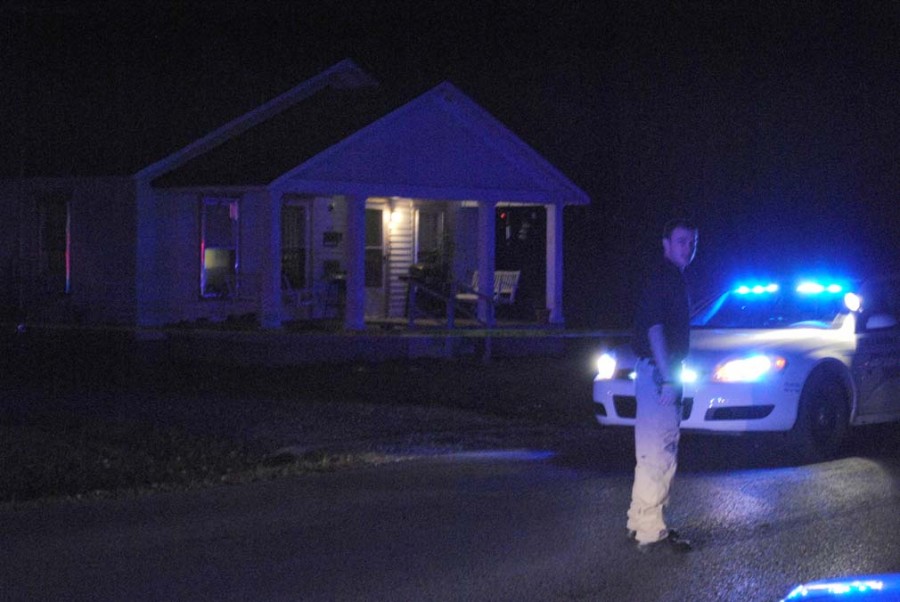 Ohio – -(Ammoland.com)- [Recently] at work I responded to an urgent call for backup. An armed homeowner pulled a gun on one of my fellow officers. In the end, everything turned out fine. No one got shot. By the time I arrived at the home, both officer and homeowner had secured their respective weapons and were talking peacefully. It was a tense situation for a few seconds and could have ended tragically. Here’s how it went down…

The officer was dispatched on a “check the well being” call. A high school student had called police to report that he had received several texts from his friend. The text messages hinted that the friend was planning on killing himself. The officer was sent to the friend’s house to ensure that he wasn’t suicidal.

It was 9 pm and dark outside. The house was lighted up inside and the officer heard sounds that indicated the house was occupied. The officer knocked on the door vigorously and rang the door bell. No one answered.

The officer could have just left the scene at that point, but he is conscientious and wanted to make sure that the boy wasn’t in danger, or even worse, had already attempted to kill himself.

Seeing lights on at the rear of the house, the officer decided to try knocking at the back door. He entered the back yard through an unlocked fence gate and was walking towards the back door of the house when the homeowner spotted him.

The homeowner was inside the house and couldn’t see well. He heard his gate open and close, then saw a man dressed in all dark clothing poking around in his back yard with a flashlight in hand. The homeowner ran to get his pistol.

By the time the officer reached the back door, he was looking down the barrel of the homeowner’s gun. The cop drew his own gun, called for backup, shined his flashlight on his badge, and verbally identified himself as a police officer. The homeowner immediately lowered his gun, then secured it before opening the back door and talking to the officer. Tragedy averted.

Let me start by saying that no one in this situation did anything wrong.

The cop was trying to make sure a boy wasn’t going to kill himself. The homeowner was legally defending his residence from a suspicious intruder approaching the back door of his house. Some frazzled nerves, poor training, or a couple more pounds of pressure on either weapon’s trigger would have resulted in a tragic outcome.

How do we prevent situations like this from going bad?

We have to start by teaching cops to take extra care to identify themselves in any ambiguous situation. Any time a cop is on another person’s property, he should be in full uniform. He should repeatedly verbalize the fact that he is a police officer.

Basically, cops need to slow down a bit and look at their actions from the perspective of an armed homeowner. Would the cop’s actions be thought of as “suspicious” by the property owner? If so, it’s up to the cop to change his approach to ensure that the resident knows that the person lurking in the darkness is a police officer instead of a potential home invader.

Second, you as a homeowner must recognize that there are legitimate reasons for police to be on your property (and occasionally in your house). Not every “intruder” is a criminal. I hear a lot of talk from armed citizens saying “I never break any laws. There’s no reason for the police to be on my property. I’ll shoot first. Better to be judged by 12 than carried by six…etc.”

That logic is wrong. The homeowner in this story didn’t break any laws. He didn’t have any reason to suspect that the police would be coming to his house. Despite the fact that the homeowner did not violate any laws, there was still a legitimate reason for the police to be poking around his back yard.

There are lots of completely legal situations that could result in a cop, fireman, or utility worker to need to be in your yard. Let’s use some logic here. What is the more likely explanation for a strange man to be in your yard at night? Is it more common that that stranger might be a first responder of some sort, or is it more common that the stranger would be a home invader?

Speaking for myself, I’ve never been the victim of a home invasion, but I’ve seen utility workers in my yard dozens of times…even at night. I’ve had firefighters walking through my yard trying to find the source of a brush fire. I live in a relatively safe neighborhood. If I play the odds, it’s more likely that anyone on my property is a neighbor or first responder than it is that the person is a criminal.

We all just need to calm down a bit. I’m not saying that you shouldn’t defend your property or yourself. Just make sure that the person you are “defending” against is a real threat. Shooting the policeman who is trying to ensure your son isn’t trying to kill himself doesn’t create the outcome you are looking for.

Cops need to make sure their actions don’t appear criminal. Armed citizens need to ensure that they practice good target discrimination and take some training about how to adequately address threats in a low light environment. Both groups need to be calm and clear thinking, without the automatic “I am right” egotistical response that is commonly seen.

Cops don’t want to get shot. Armed citizens don’t want to mistakenly shoot a cop who is trying to help them. Both groups want the same outcome. But it is only by understanding the other group’s perspective that we can safely achieve it.

Greg Ellifritz is the full time firearms and defensive tactics training officer for a central Ohio police department. He holds instructor or master instructor certifications in more than 75 different weapon systems, defensive tactics programs and police specialty areas. Greg has a master’s degree in Public Policy and Management and is an instructor for both the Ohio Peace Officer’s Training Academy and the Tactical Defense Institute. For more information or to contact Greg, visit his training site at Active Response Training.

About:
Buckeye Firearms Association is a grassroots political action committee dedicated to defending and advancing the right of Ohio citizens to own and use firearms for all legal activities. Visit: www.buckeyefirearms.org