Mexico’s autodefensas are armed citizen militias attempting to protect local populations from drug cartel-related extortion, rape, torture and murder. To that end, the autodefensas oppose the corrupt politicians and police working for the drug thugs. At the same time, the autodefensas try to protect residents from the domestically deployed Mexican military, whose human rights record is deeply shameful. You know; if they felt shame. Borderland Beat reports that the ongoing three front war against the autodefensas has entered a new phase; targeted assassination of its leaders. I wonder whom the U.S. government supports . . .

By: César Vázquez | Translated by Valor for Borderland Beat

He was ambushed towards the area known as Púcuaro, located in the municipality of Tancítaro. Along with the leader of the autodefensas was his brother, who was also killed, who accompanied him on their way to the community of El Zapote when they were hunted down from the mountains.

Jesús Bucio Cortés was being pointed out in recent days because of his constant denunciations of recent attempts by the Caballeros Templarios in trying to return to the region. He also denounced that avocado farmers were being extorted again by the criminal group.

The autodefensa leader of the region had also arrested José Manuel Montero Nambo, who had kidnapped his son. He personally took him to the Mil Cumbres CERESO (Social Rehabilitation Center), but three months later, the capo was out on the streets. He even claimed that this man was the main enemy in the region and that he constantly stalked the communities as well as threatening them in taking revenge.

The perpetrators of this crime are unknown. At this moment, security forces, other autodefensa groups, and the Fuerza Rural are combing the area in order to find those responsible. So far there are no arrests, although a strong operation is taking place in the avocado growing area. 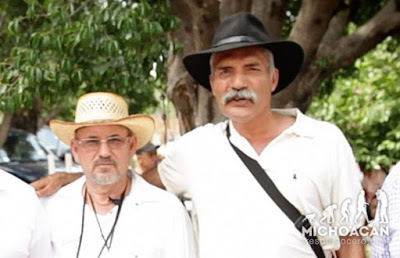 This is the fifth autodefensa leader who has suffered an attack and the most visible in the region that goes from Buenavista to the region of El Bajío and La Meseta.The first to experience an attack was Hipólito Mora [above, left], who was attacked by the H-3 on December 16, 2014 at the roadblock that they maintained in La Ruana. The attack left 11 dead. On May 15 of this year, Enrique Hernández [above, left], leader of the autodefensas of Yurécuaro, was assassinated while carrying out a political campaign in Yurécuaro. No arrests were made. Ten days later, on May 25, an armed group attacked Semeí Verdía, Commander of the Community Police of Santa María Ostula and General Coordinator of the Autodefensas on the coast of Michoacán. He was imprisoned two months later and after serving more than a month in prison, judicial and ministerial authorities have failed to prove any crime against him.

On June 5, armed gunmen shot and killed Camilo Santana Aguirre, who served as commander of the autodefensa group that operated in the municipality of Huetamo. The incident took place on Saturday night when armed gunmen stormed into the establishment known as Lupita, located on the road Huetamo-Churumuco, and shot the autodefensa commander.