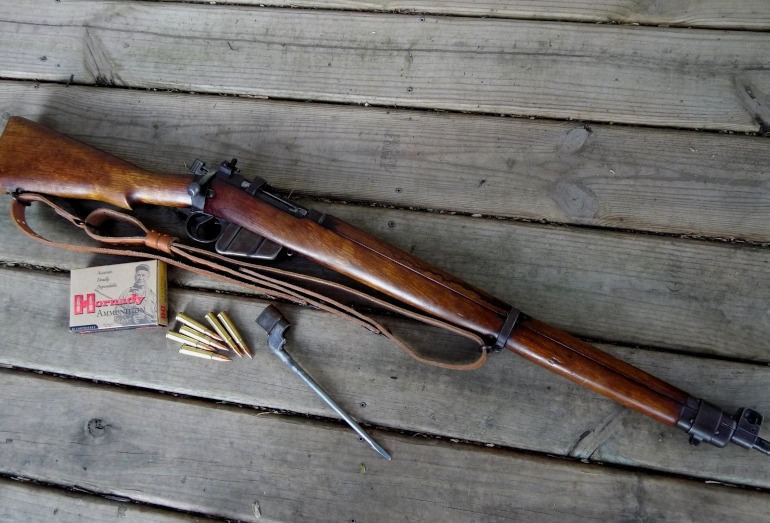 There are few guns that capture the imagination like those from World War II. I got into shooting because of my interest in these classic weapons and my love of history. Finding these guns at shows or local stores became a sort of sport to me and I loved the idea of getting my hands on what I felt was living history. In this article I will be taking a look at a unique rifle of American manufacture destined for British service: the Savage No. 4 Mk1.

Instead of boring you with a historical commentary that you could easily find in the dustier section of a library or the internet, I’ll give you quick summary of this gun and what its context. My particular example was made at Savage in 1943. It has simplified features as compared to earlier Enfield models. The nature of wartime manufacturing necessitated a reduction in machine operations and many features were either stripped down or made differently to speed up production time.

The gun was actually produced by Stevens, a division of Savage arms, in Massachusetts to fill the British demand for a fighting rifle. During the early parts of the war, Hitler’s seemingly invincible forces were spanking virtually everyone in Europe and the British suffered as their manufacturing plants and industrial areas were bombed to rubble.

The British had little choice when it came to where they got their guns and American machinery began to make the quintessential weapon of the Empire in great number. The Lend-Lease Act passed in 1941 and American help was on the way.  Note the “US Property” stamped on the receiver indicating its origin as the Lend-Lease Agreement with the United States, along with No.4 Mk I. The gun itself is somewhat standard for the time period, but it had a number of features that made it, at least on paper, superior to other bolt actions of the era. For one, the rifle boasted a ten-round detachable box magazine. It was meant to be loaded by stripper clip and it was not issued with a spare. It was typically only removed for cleaning and maintenance, but the fact it held double the on-board rounds of a Nazi K98k made it a serious force on the battlefield.

Another feature that made the Savage Enfield an excellent rifle was that, unlike the American Springfield 1903/1903 A3 and German 98 Mauser, it was a cock-on-closing design with rear locking lugs. The Enfield action is a bit of a weird design when compared directly to the systems we know today, as virtually all modern bolt actions are derived from the Mauser action, including the Remington 700 and Winchester Model 70.

The entire mechanism is completely different from what most people know a bolt action to be and it represents a unique line of thinking that has sadly died off. I believe that this is because there is really no way to improve upon or further simplify the Enfield action and, because it was complex, it was ruled to be impractical. That said, there’s almost nothing out there like the Enfield action. Except other Enfields. The action is capable of being operated with incredible speed and smoothness and even a mediocre rifleman can deliver aimed fire at distance with almost the same speed and accuracy as an M1 Garand.

So slick and reliable is the Enfield action that the Mad Minute, fifteen shots on a target at 300 yards, is fully possible. The speed at which the Enfield action can be used is legendary, with some shooters being capable of emptying the 10-round magazine in less than ten seconds while aiming.

When it comes to accuracy, the Savage Enfield benefitted from American ideas of precision. My example features a two-groove barrel that was easy to keep clean while being very precise. I’ve fired a number of Enfields that were made as long ago as the late 1800’s that were preserved in near-new condition and none were as accurate as this example. Depending on what manual you read, the British service rifle was supposed to be able to put between ten and twenty rounds into a 6” square at 100 yards (or 6×4” @100yds, or a 48” square at 300 yards). That seems like poor accuracy by American standards, but the British had a different idea of what a fighting rifle should do in combat. They were generally not as concerned with individual accuracy as the Americans, and this is evidenced by the fact that the individual American soldier was trusted to adjust his sights to his own zero, where the British typically had their sights set at the factory for a given load.

There were several heights of front sight that could be installed on the No. 4 Mk 1* that were designed to give the rifle a 300-yard zero. My rifle has a flip-up sight that is set for 300 and 600. Any other adjustments had to be made on the fly. My rifle was fired with two kinds of ammunition at ranges of 100 yards, 300 yards, and 600 yards. I fired both Prvi Partizan 174 soft points and Hornady 150gr SP Interlock through the gun and chronographed them over my Oehler 35P.

The Prvi load was very accurate and generated ten-shot groups averaging 3.5” at 100 yards. Velocity averaged 2455fps at eight feet from the muzzle. The impact was about 17” high of point of aim at 100 yards. This load was dead-on at 300 yards and was capable of ringing my 10” steel plate every time by holding directly center. At 600 yards, it dropped low of point of aim by about a foot, which is close enough for government work.

The Hornady load displayed slightly better accuracy at 3” for ten shots at 100 yards. The average velocity was 2695fps and recoiled more sharply than the 174gr load. At 100 yards this load also shot high, this time about 15-16”. At 300 yards it was shooting high as well, but only by about 5”. I had to hold slightly under my plate to make it ring. At 600 yards it shot just about right on, which was strange to me, as I was expecting it to still be high. I attempted some Mad Minute drills, but wasn’t able to work up to the speed. As a CMP competitor and regular at the Camp Perry National Matches, I thought I’d be able to meet the speed and accuracy requirements, but sadly I fell short.

CMP matches require ten rounds in 80 seconds at 200 yards with a mandatory reload (five and five for a bolt gun, two and eight for the M1), so my engrained pacing was off for trying 15 rounds with two reloads at 300 yards. With practice I’m sure I could make it. I think. The Savage Enfield rifle is an interesting and important part of WWII history. It’s likely that more American-made Enfields served in the war than those produced by the British.

Obtaining one today that’s in good condition can be difficult, but it not impossible. Prices range from about $600-1,200 depending on accessories, overall condition, and, honestly, who you buy it from. My example has a number of original and matching parts, a bayonet, and other items that place it in the higher tier for cost, but serviceable examples exist in as good a shape as mine without all the goodies.

Accuracy: * * * * *
This is no target rifle, but it will see use at the 2019 National Matches after I install a dedicated 200-yard front sight. My example may not win a gold, but it will certainly give those damn Mausers a run for their money again.

Ergonomics: * * * *
The sights are a bit hard to use and could be a little finer, but this is a fighting gun and it’s rugged as all hell and has the hardened features to match.

Aesthetics: * * * *
Some consider it utilitarian, robust, hardworking, and overwhelmingly British. Much like Tilda Swinton. But, like Tilda, this rifle has taken many roles that a more fragile model couldn’t and it’s well remembered because of it.

Customize This: Just don’t
Don’t even think about altering one, Bubba. It’s forgivable to file a front sight or install a new replacement part, but a special circle of Hell awaits those who still butcher military surplus rifles in 2018.

Overall: * * * * *
This is a part of history, plain and simple. The Savage Enfield No.4 Mk1* is a classic and represents the finest of bolt action rifles.