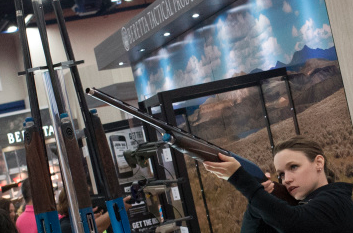 Gun control and anti-gun control playbooks are breaking out all over. Time magazine sent a blogger inside NRA University to uncover the secret education given the college kids preparing to extend and defend Americans’ natural, civil and Constitutionally protected right to keep and bear arms.  While the magazine couldn’t resist taking a swipe or two at the NRA’s message on messaging, the post is accurate, informative and, sniff, patriotic! The college kids are taught that the NRA is not a gun lobby (see: civil right statement above), guns aren’t as dangerous as Michael Bloomberg would have you believe, and Michael Bloomberg is as dangerous as TTAG would have you believe. Oh and they learn that the NRA believe the children are our future (Wayne LaPierre’s post-Newtown slam against violent videogames aside). Now, if we could only get our institutions of higher learning to teach the youth who Wittgenstein was. Or get Time to use hot links. And see the irony of using the Jewish philosopher—on his father’s side—to mock the NRA.