A few years back Lilian Camalet of 4 Stable Stick asked me what I thought might be lacking in his line of fieldrests. I answered “A model for shooting when sitting on the ground.”

Besides the wide applications in Lilian’s neck-of-the-woods (i.e. Europe), I imagined such a rest being very attractive for North American hunters who go after turkey or those who still-hunt deer, predators, prairie dogs, or any other species that involves setting up temporary stands.

Coincidentally, I was approached a couple weeks back at my local gun range by a person wanting a rest to use while seated in ground blinds when hunting Southeastern whitetails. Ronnie had seen me testing various 4 Stable Sticks models and he asked if they made a rest that allowed a still-hunter to fire from a seated position.

I was able to answer in the affirmative, but I also had to say that I had not yet reviewed that particular rest. I was, however, able to give him the link to the interview published at here in which Lilian demonstrates his just-released ‘Sit Stick‘. 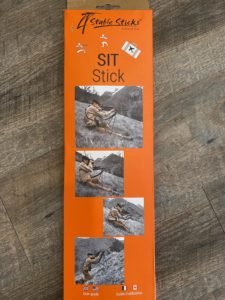 When fully-collapsed and folded for packing on a trip, the Sit Stick is only 28″ in length. Extended completely, but folded, it is 42″ tall. The height for the rifle rest at the shortest length is approximately 18.5″. This would work for a child shooting off the sticks.

The height of the rest when fully extended is approximately 29.5″. I am 5′ 11″ tall and this is a bit too high for me to use when sitting down. So, the Sit Stick can accommodate people from approximately 4-7 feet in height, give-or-take a few inches.

Though I plan to use the ‘Sit Stick’ in North America, my most pressing need is for an upcoming Safari to Mozambique. I will be hunting with Mark Haldane’s Zambeze Delta Safaris (see TTAG interview with Mark).

One of the species I will be going after is Cape Buffalo. Mark and his PHs predominantly hunt these animals in the open, short-grass habitat near swamps. They crawl in close to the herds, spend time scanning the bulls and, if a suitable bull is located, the client takes the shot; the time spent examining the herd and taking the shot is from a seated stance.

It goes without saying that it isn’t just important for me to be able to take a shot at a Cape Buffalo bull from a seated position; I need to be able to have a very secure rest from which to shoot. If I wound a Cape Buffalo, it could get very messy very quickly. Hence the need to give the Sit Stick model a thorough trial with the rifle I plan to use for the Cape Buffalo hunt.

Recently, Frances and I headed to the Government Training Institute near Barnwell, South Carolina to review firearms and equipment. I took the opportunity to bring along the Sit Stick and an MG Arms Ultralight rifle chambered to .416 Taylor. Kerry and Carol O’Day built this rifle for me to review for TTAG. The idea was for me to determine whether one of their ‘Ultralights’, chambered for a dangerous game cartridge, would be shootable/accurate. It was a success on both counts.

Kerry and Carol have agreed to let me take their rifle to Mozambique for the Cape Buffalo hunt. Our analysis at the GTI range would determine whether I could be accurate shooting the .416 Ultralight from the Sit Stick. The following video from the GTI range shows me setting up and then firing several of the shots from the Sit Stick.

The ease of setting up the Sit Stick rest, and the stability it provides the shooter (no barrel wobble!), should be apparent. However, the proof is in the pudding/shooting.

The following photograph shows my first two, three-shot groups. The lower group contains shots 1-3 and the upper, shots 4-6. I adjusted my hold, rather than the scope, so that I could hit the splash target. All six shots were from 100 yards. Though not 1X MOA (both groups are approximately 2 inches across), both sets of shots are definitely well within ‘minute-of-buffalo.’ In other words, depending on the angle of the animal, the heart-lung area of a Cape Buffalo bull will exceed six inches in diameter.

My conclusion from this rangework is not only that the Sit Stick doesn’t suck, but that it will provide a very secure base for firing at game – in this case, very dangerous game in Mozambique.

For me, the approximately $75 this model costs is well-worth the comfort of knowing that the rest from which I take a shot at a Cape Buffalo will be solid. [Except where noted, all photos and video courtesy of Frances and Mike Arnold.]