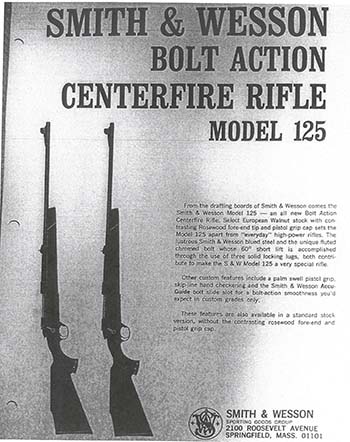 For most of its history, Smith & Wesson had been known for producing high quality revolvers. When the polymer pistol craze began, S&W jumped on the bandwagon as well and, while they still make a wide variety of revolvers, are mostly known for their pistols and AR-15 rifles – at least to the younger generation of shooters.

There was, however, a brief period of time where Smith & Wesson thought about offering high quality, American-made bolt-action rifles. The project began in S&W’s Engineering Department in 1972. The idea was to determine the feasibility of producing rifles at their Springfield, MA plant instead of importing them from Japan.

The design was known as the Model 125. The rifles were slated to feature a select European walnut stock with contrasting rosewood fore-end tips and pistol grip caps. The bolt was fluted and chromed, and featured a 60-degree short lift with three solid locking lugs. The bolt fit into the “Accu-Guide” bolt slide slot for a “smoothness you’d expect in custom grades only.” Unfortunately, the gun never got off the ground. Testing and market evaluation proved that it was not a practical move for the company and that a “cheaper and better rifle” could be imported and sold by S&W instead. As such, the project only lasted a year and was abandoned in 1973. The unfinished barreled actions were reportedly sold as scrap.

Even so, it seems that the gun lingered for a couple years in various pieces of gun literature. Two years after the product was scrapped, the 1975 Guns & Ammo Annual advertised the gun for sale.

Standard Catalog of Smith & Wesson, regarded as “The Bible” for all things S&W, has very scant information on the gun’s production. The authors note it as being an incredibly rare model with as few as five having been made. It’s possible that even fewer survive today.