Terril Hebert writes [via ammoland.com]: The number of rounds fired in citizen-involved self-defense encounters is hard to gauge. I have searched high and low for answers, but even the FBI doesn’t keep that sort of data. Studies, including that conducted by Kleck and Gertz in their 1995 book Armed Resistance to Crime point out that more than 92 percent of all self-defense uses of firearms don’t involve firing the gun.

But what about that remaining eight percent of the time when you have to pull the trigger? There isn’t any clear data on this, and there are many scenarios to justify any extreme. Suffice to say that a high capacity pistol will probably get you through any issue.

But many of us carry small, pocket sized handguns that sacrifice handling and capacity for program compliance.

Pocket 380s and 9mms fall into this category, but they do benefit from being easy to reload with additional magazines, though this is more awkward given the abbreviated controls of the gun. The situation is more precarious if you choose a wheel-gun as your concealed carry handgun. We know revolvers have their place and benefits over auto-loaders, but simple reloads aren’t one of those things.

So what if you empty your revolver in a fight and need to reload? There are quite a few options to get the job done, but which is best? Let’s have a look.

What Kind of Guns Are We Talking About?

Double action self-defense revolvers used to be the gun of choice, but today they are one of many excellent self-defense options out there. A few of us are carrying full-sized or small-bore revolvers for personal defense, the most common choice today are small-framed snub-nosed revolvers in 38 Special.

This is worth mentioning because these handguns have more quirks to overcome when it comes to defense and reloading. We will get into some of these later, but the main point is that most of these “snubbie 38s” will carry only five rounds on board.

You know their names: The Smith & Wesson J-frame, Taurus m85, Ruger LCR, etc. We can talk about higher pressure +P and non +P ammo another time, but suffice to say that the guns will need to be disassembled and put back together again every five rounds.

The question is: How to reload fast with as little fuss as possible?

It is common for me to see a revolver shooter at the range reloading his gun with loose ammunition, one or two rounds at a time.

Until the 1970s, this was the way revolvers loaded in the field, both recreationally and in law enforcement. Police officers usually carried their spare cartridges on belt loops or dump pouches attached to the belt.

Pulling a buckle would release all six cartridges into the hand for reloading. These dump pouches were fast to deploy, but even that wasn’t a perfect solution. No matter how you slice it, loading with loose ammo is cumbersome enough at the range without ducking your head to see what you are doing. It would be even harder to do under stress.

The 1970 Newhall Massacre and FBI 1986 Miami Dade Shootout produced examples of officers who were shot down while trying to reload their revolvers with loose ammunition. In practice, there is indeed the temptation to keep loading until the cylinder is full when a partial reload would be preferable.

Reloading Loose Rounds: This method requires no investment in extra gear and is useful when practicing partial reloads where you fire two or more rounds, pluck the spent brass and push in more, just in case.

The problem with loading loose ammunition when encountering danger was obvious, and one of the first solutions was developed by John Bianchi in the late 1960s. Bianchi Speed Strips remain very popular and readily available, as are their imitators like Tuff Strips.

Where I was unable to find speedloaders, I was still able to find Speed Strips on the shelf. These rubber strips hold six rounds with an almost stripper clip type of appearance.

Trying to use them right out of the box with my Smith & Wesson Model 638 revolver was a mistake. The strips right out of the packaging are very rigid and require some stretching in order to work correctly.

After a minute of using them for hand exercise, I snapped more rounds onto them and went to loading. Snap two rounds into the cylinder then pull up and away with the strip. Turn the cylinder slightly and repeat.

With some practice, I was able to get my revolver reloaded in about eight seconds with much less fumbling than with loose rounds.

The benefit of Speed Strips is their profile, which is flat much like a semi-auto’s magazine. Easy and discreet to carry your spare ammunition in your pocket or a pouch on the belt.

These are the way to go when it comes to partial reloaders as you can snap in two rounds with a well… snap of the wrist. Using the overhanging fingers to feel for the edge of the cylinder allowed me to reload without looking at the gun, though it took some real trying to do so.

The concept has caught on, not just in auto cartridge chambered revolvers, but in pistols machined to take Moon Clips with standard rimmed revolver cartridges. If you want absolute speed, this isn’t a bad option.

The only downside is the fragility of the system. The tempered steel clip could be damaged or bent when dropped on the ground or otherwise abused.

If bent clips are used again, they could bind the gun up, preventing operation. Avoiding damage at the range is easy enough, but I wouldn’t feel content with simply throwing a moon clip in my bare pocket and hoping for the best.

The Revolver Speedloader became widely used after the shock of the 1970 Newhall Shooting, and today it is most available and straightforward way to speed reload a revolver.

The fundamental principle is a body that holds the ammunition in a circular fashion as it would be in a revolver cylinder, and a means of releasing the rounds. There are different brands with different operating systems that have their tricks and benefits, and I have tried quite a few of them.

Along with Bianchi’s Speed Strips, the HKS and Safariland Comp loaders are the most available ways of speed reloading your snubbie revolver. Both are durable, yet the bodies of the loaders are made of polymer.

The HKS is easy to load by dropping in your rounds, twisting the knob to secure them, then rotating it in the other direction to release the rounds into the gun.

The Safariland relies on a gear that is activated by pushing the base of the loader against the cylinder face to release its rounds. It is loaded by dropping in the rounds, pushing the bullet noses against a flat surface, and then twisting the gear.

The HKS is the least expensive and most available of the two, but the use of a manually twisted knob make it inherently slower than the Safariland.

The HKS shaves my time down to about 5 seconds while the Safariland goes down to 4 seconds flat. The one downside to speedloaders—these two in particular—is that the body sometimes becomes wedged against the grip, preventing a precise release of the rounds.

Oversized grips are a no-no. Even stock grips, like on my test gun – the Smith & Wesson Model 638 – I had some trouble. This is fixed by changing the grips or taking them off and shaving down the section that binds. Five minutes with a Dremel or a hard-grit sandpaper.

There are other speedloaders on the market you may be tempted to try; most are good, some have their drawbacks, just like the big brands.

I enjoy using Speedbeez Loaders on the range, and the rounds are clicked in under a garter spring. They are fast, just as fast as the Safariland models if not slightly so. They also have durable aluminum construction.

However, you will need a good rigid case on your belt to hold it. Tossing it in your pocket or letting it fall on the ground is a good way to lose a few rounds. These loaders are also not as universal as some others, being made very specifically to a particular revolver model.

I have tried 5-Star aluminum machined speed-loaders in my Ruger LCR in 22 Magnum, and they rely on a knob to release the rounds like the HKS. While theoretically more durable than those, the rounds tended to rattle a bit and move slightly while manipulating it for reloading the gun.

Even though revolvers aren’t as popular as they once were, there are more reloading options for them now than ever. Loading with loose rounds require no additional investment and is worth training on while not looking at the gun.

Speed Strips are far better, and they carry very slimly on the body. However, like loose rounds, you will need manual dexterity in your hands to get the job done efficiently.

Speedloaders are not as easy to carry, being bulkier, but require fewer motor skills to work with. The same is valid for moon clips if your handgun can accept those. In the unlikely event of a lethal confrontation, you will be very unlikely ever to need to fire your weapon.

However, personal defense has everything to do with unlikely events. Reloading takes practice, and that is even more true with revolver speed strips and speedloaders. Find what works best for you and carry on. 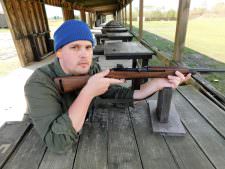 Terril Hebert is a firearm writer native to south Louisiana. Under his motto—Guns, Never Politics—he tackles firearm and reloading topics both in print and on his Mark3smle YouTube channel, where he got his start. He has a soft spot for ballistics testing, pocket pistols, and French rifles. When he is not burning ammo, he is indulging his unhealthy wildlife photography obsession or working on his latest novel. Scourge of God was published in 2017.”