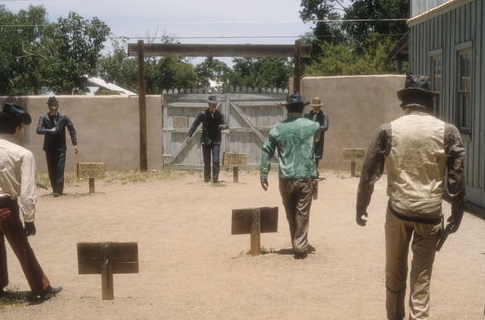 While gun rights advocates are waking-up to some of the positives offered by the Manchin-Toomey compromise “universal background check” bill, so are the gun grabbers. “Times Square could become a new ‘OK Corral’ if the NRA and its enablers in Congress tack an amendment onto a gun control bill, Sen. Charles Schumer said Sunday,” repeated by the entirely credulous nydailynews.com “The ‘reciprocal concealed carry’ amendment would allow anyone with a permit to carry a concealed weapon in any state to use carry (sic) the gun legally any other state.” And that’s bad because states with de facto bans on concealed carry (e.g. New York) would get an earful from residents shouting WTF. Where’s our concealed carry permit? Oh wait. That’s not it . . .

“Times Square is different than rural Wyoming, and our police don’t need even law abiding citizens having the right to carry guns,” Schumer said.

Wait. What? New York police don’t need law-abiding citizens to exercise their Constitutionally protected right to keep and bear arms? Who asked them?

I’ve got a question: is this a deal breaker? Would Republicans turn against the Manchin-Toomey compromise if the Dems strip national reciprocity form the bill? Senator Marco “I’ll filibuster” Rubio ain’t saying.

“Someone who has a conceal-carry permit has been background-checked. That’s why they have one…I think that should be part of the bill,” he said on ABC’s This Week.

Huh. So let’s go back to why this is a bad idea, according to the News.

Cops oppose the amendment because it would be too hard to figure out whether a person carrying a gun on the street was a legal permit holder from another state or a criminal, said Pete Paterson of the Nassau County Police Benevolent Association.

“This will be very dangerous for police officers,” Peterson said.

Not so benevolent if you ask me. But completely, 100 percent asinine. A concealed carry permit holder from another state would have to show his permit. (Kinda like a driver’s license if you think about it.) Hang on. Why would a NY cop query a permit holder in the first place? Oh right. Stop ‘N Frisk. Electronic gun detectors. Well . . . deal with it.