BLAM! The shot was noticeably loud and snappy. Then again I was shooting full-house 10mm. Debris peppered my face. “What the heck?” I thought it was dirt or bullet material ricocheting back from downrange. But the stinging in my hands reached my brain and I looked down at my GEN3 GLOCK 20SF to find the right side of the frame blown out, the mag release missing, and my strong hand reassigned to a different location on the grip. I promptly swore (warning: there’s some choice language in the video) and threw the gun down on the ground in front of me (pointed downrange, of course). As I was shooting from a kneeling position the snow-covered ground was the best place to put it. First step, of course, was taking stock of myself. Everything was still attached. There was no blood or open wounds. Good lord did my hands sting. Probably didn’t help that they were already really cold from shooting outside in snowy conditions for a few hours. Damn, I wish I’d been wearing gloves. They at least would have prevented that pressure-blasted carbon soot from staining my skin — a nice, straight line down my thumb from the slide/frame gap, around the web of my hand from the same, and in various other areas.

I am, however, very glad I had eye protection on. I took off the silly sunglasses I wear in most of my videos and put on actual, safety-rated lenses since I was off camera. Not that the sunglasses wouldn’t have been sufficient. There was no damage to my face as I’d only received a minor sandblasting of insignificant debris. But it could have easily been a very different scenario. As you may have guessed from the first photo, the right side of the magazine release attempting to reach low earth orbit did the most damage. It was fully covered by my strong side hand in a solid grip, lined up with the bottom of my trigger finger. Practically right in the web between trigger finger and middle finger, really.

With the gun kicking back from the very stout recoil and the top of the frame popping outwards, it appears to have moved my hand enough such that the mag release smacked the first knuckle on my index finger as it escaped over the top. The photo above was taken three days later and shows some of the broken blood vessels and light bruising. It was tender but really not that bad at all, and that’s the extent of the damage I suffered.

It’s fair to say that my GLOCK absorbed the brunt of the blast. 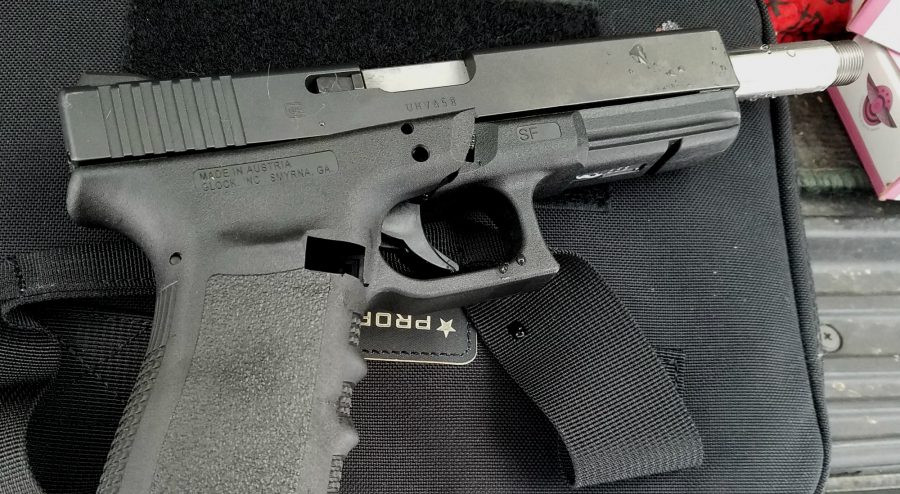 Inside the slide was a Lone Wolf 6.6-inch threaded barrel and a 21-lb. recoil spring. I’ve shot hundreds of rounds of 10mm ammo through this setup without a hiccup. As it turned out, I was likely lucky this barrel, with its better case support than the factory one, was in the gun at the time. 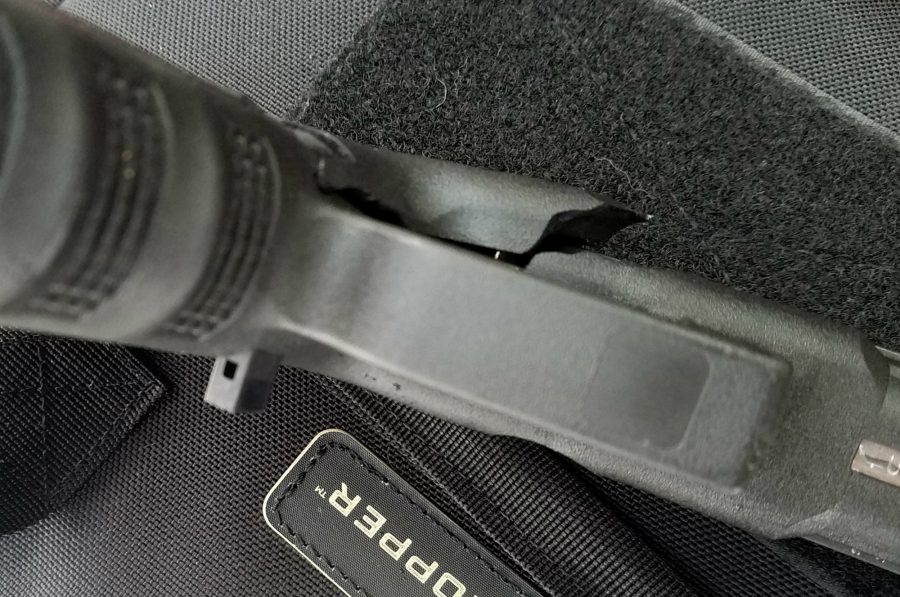 The mag release button almost escaped the left side of the frame, too. Significant gas pressure clearly shot down into the magazine. It broke through the front of the follower, popped the magazine almost entirely out of the frame, and caused it to expand so much that it split the polymer overmold right down to the baseplate. When I removed the magazine from the gun, round number two was positioned exactly as seen above. Loose chunks of plastic were rattling around inside the magazine. 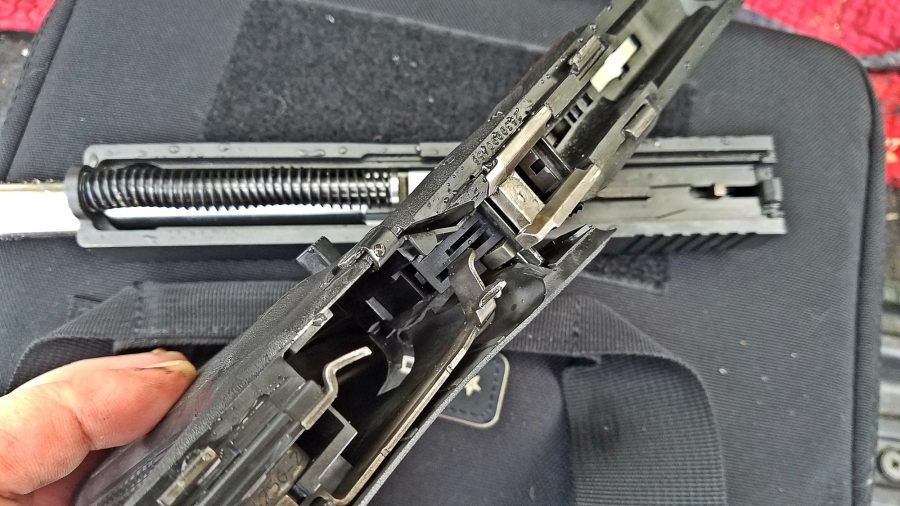 Believe it or not, the frame popped right back into place and at that point everything (mag release excepted) still functioned. I was then able to verify that my G20 wouldn’t fire out of battery, striking that off the list of potential causes.

No part of the slide or components therein appeared damaged at all. It was sure dirty, but nothing about the barrel appeared or measured out of spec as far as I could tell. It’s with Lone Wolf now for a full inspection, but I believe it survived the ka-boom without a scratch. So, what caused the detonation? We know it wasn’t the gun firing out of battery and thanks to capturing the previous shot on video I was able to conclusively rule out the possibility of a barrel obstruction. Everything pointed to a bad round of ammunition.

The ammo in question was from Underwood Ammunition, a brand I know, trust, and have a great affinity for. Specifically, it was their 10mm loaded with Lehigh Defense‘s solid copper Xtreme Penetrator projectile.

I contacted Underwood and laid out my case, suggesting I believed it was almost unquestionably an ammo issue. Specifically, my guess was either a double charge (too much gunpowder in the case) or a loose bullet that was shoved down into the case when it fed, causing a pressure spike.

Underwood was extremely responsive, friendly, and helpful. They immediately stepped up to the plate and informed me that they would, at my preference, either replace everything that was damaged or would send me a check for the appropriate amount. I had only to send them a list of ruined items: one full-size GLOCK SF frame, one G20 magazine, one pair Kirkland Signature boy’s size extra medium underwear.

They also e-mailed me a shipping label so I could send the remaining ammo back to them for inspection. Underwood analyzed it and provided the following statement on the cause of my G20 kaboom:

After receiving the ammunition back and testing, we have determined that an anomaly in the projectile is what caused the malfunction in the firearm.

The issue has been resolved and we have invested in the most advanced inspection equipment available to ensure nothing like this will become an issue in the future. This equipment utilizes infrared laser technology to detect any inconsistencies in the rounds or projectiles. It is able to do so with far more scrutiny and accuracy than any other method we have come across.

We never want anyone to be in danger of destruction of property or, worst of all, injury while using our product. Safety and quality are our two most important goals when manufacturing ammunition.

Specifically, the projectile diameter was undersized. Even though the case was properly crimped, the bullet was easily pressed down into the casing (bullet setback) when the round fed into the chamber and this caused a sufficient spike in pressure to do the damage seen above.

I can only assume that Underwood will have a chat with Lehigh (also a brand I know and like, which has a solid reputation for making quality, innovative products and even won our Reader’s Choice Award last year) about this, but for Underwood’s part they didn’t change their tune about taking ownership and sending me a check. As far as they’re concerned it was their ammo and therefore their responsibility, and they’re going to make it right. Period. This level of customer service is certainly appreciated, and they’ve made the whole process as easy as it could possibly be.

For me, I still trust Underwood’s ammo and will continue to use it. I’ve been shooting (and browsing the interwebs) enough that I’ve seen serious ammunition malfunctions and kabooms from just about every major brand of ammunition available. This sort of thing is a risk we all assume as shooters. I’m thankful I wasn’t injured, thankful that Underwood handled it so nicely, and I think it’s great that they’re doubling down on inspection equipment to make sure even projectiles purchased from trusted manufacturers are measured before they’re loaded.

My main takeaways: always wear eye protection, keep a first aid/trauma kit in your range bag, guns and ammo are complex systems that can fail in dangerous ways, and I may just wear shooting gloves more often.

[UPDATE] Further input from Underwood Ammo regarding the question of a recall and expanding on the brief statement previously provided:

Looking back, I failed to clarify that the other projectiles that were found to be too small were not from the same box of ammo we sent you, but from the same shipment of projectiles we received from the manufacturer. We looked through all of those and found 4 additional projectiles in addition to the one that caused your malfunction. We also went through our shelves and check each round that had already been loaded and found no issues. We are extremely confident this issue is isolated and resolved.

We have, however, given great thought to a recall because we do not want anyone else to be put in harms way. As a result, we are contacting all customers who purchased the same lot number as you did and offering them an opportunity to exchange their box of ammo for a new one.

While we are confident this will not happen again, it simply isn’t worth risking anyone’s safety.