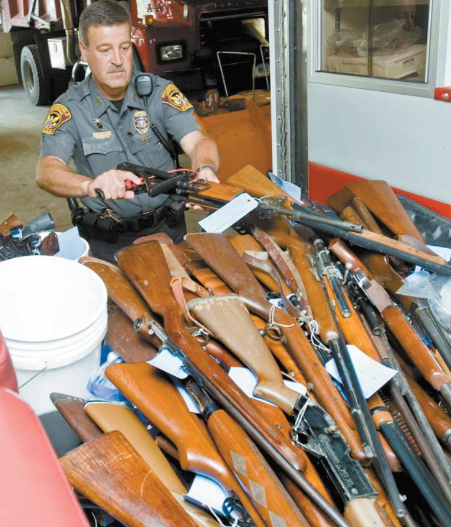 My father once told me: don’t kick a man when he’s down. Unless he’s a bad man. Then kick him until he stops moving. So I will continue kicking gun buybacks (editorially speaking) until pols pandering to political correctness abandon their anti-gun agitprop for firearms freedom. Which could be quite some time. But there are signs that the media is slowly cottoning-on to the fact that gun buybacks are a complete waste of money—at a time when local, state and the federal government are running out of other people’s money. theridgefieldpress.com‘s lead for Police spend $29,500 to collect 103 guns: “You can put a price on safety.” See what they did there? The snarkiness is subtle but encouraging. Unfortunately, scribe Steve Coulter then gives the local po-po chest-puffing props . . .

“It was more than we expected,” said Police Chief John Roche. “The weapons came from people in town that didn’t know what to do with them or that didn’t want to bother with registering them under the new state gun laws.

“Everyone was very cooperative and very interested in eliminating their possession of these weapons.”

As opposed to uncooperative (“I will give you this gun when I’m bloody well ready you bastard”) and blasé. Anyway, why would they be what with what the CT police were paying?

Chief Roche said rifles and shotguns were the most popular weapons that were purchased. They included a Franchi SPAS-12 shotgun and the .308 Winchester hunting rifle.

However, the department was most impressed with the four banned assault rifles, which they bought at $750 each.

There was a “no questions asked” policy to promote people to turn in their weapons without fear of prosecution.

The next bit is brought to you by the Society for the Prevention of Cruelty to Firearms. Steel yourself . . .

A single gun owner turned in three of the four automatic weapons, as well as several handguns.

“He had quite the collection,” said Detective Steve Papstein.

Yes, they’re all headed for destruction. (Unless some go walkies . . .) And if that doesn’t get Constitution State gun owners blood boiling, how about this: the cops are keeping now-illegal-for-sale high-capacity magazines for themselves.

Police purchased 150 high-capacity magazine clips — 46 of which will be retained for department use — for $20 apiece. In addition, they half-filled a five-gallon bucket with random ammunition, including bullets and shotgun shells.

Oh, did I say the writer was somewhat snarkily pro-gun? I was wrong about that . . .

Despite the program’s success, Captain Ryan said 111 pistol permits have been processed this year and there are 120 permits pending, which means there are still plenty of guns in town.

Anyway, in this case, the money for the guns came from private donations. And what of police time, overtime and the big fat addition to their bank of pensionable hours? Of that no mention was made. I wonder why . . .