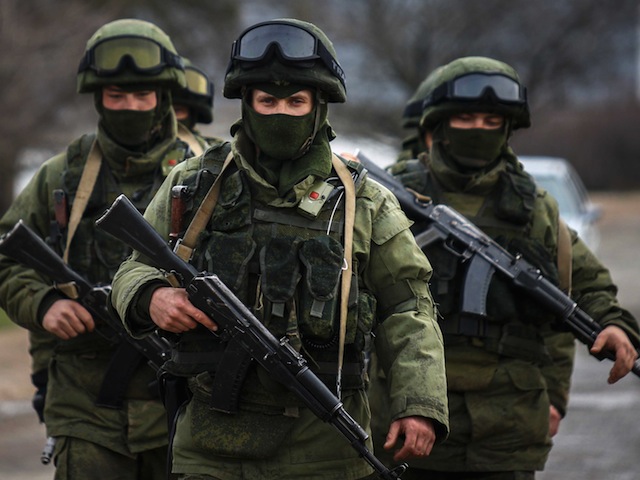 I was listening to msnbc’s Morning Joe on the way to school today. A foreign policy analyst claimed American military strategists are studying Russia’s tactics in the eastern Ukraine. As in admiring them. Instead of mounting a full-scale invasion of its former Soviet “partner,” Russia’s infiltrated heavily-armed special forces troops. They take over a government building, hand it over to locals (with a minder or two) and move on to the next one. When discussing the West’s reaction to this “soft invasion,” he repeated the Obama administration’s party line: “a military response isn’t on the table.” As my father used to say, oy vey . . .

Economic sanctions are the foreign policy equivalent of security theater. Even if we discount the fact that sanctions tend to hurt the populace of an errant country rather than their well-insulated overlords, are we seriously expected to believe that Vladimir Putin’s going to curb his expansionism because the U.S. has imposed sanctions on a handful of oligarchs and threatened to expand them to include entire sectors of the Russian economy?

“One of the purposes of sanctions is to create uncertainty and to create the expectation in the marketplace that worse could be coming,” said David S. Cohen, the Treasury Department under-secretary who oversees sanctions, told nytimes.com. “That uncertainty has led the market to punish the Russian economy.”

Only it hasn’t. “The ruble and the markets are slightly stronger than they were before the first sanctions were announced,” the Times admits. Even if the Obamanauts ratchet-up sanctions until they “bite” – a highly unlikely scenario considering Germany’s publicly declared opposition to further penalties for Russia’s Nazi-like expansion – Putin’s going to say “bite me.” What was the old story about the scorpion and the frog? It’s my nature.

I mention this because we’re watching the foreign policy equivalent of gun control. By increasing the punishment for acquiring or using a firearm illegally, by creating “tougher” “gun safety” laws, gun control advocates expect us to believe that criminals will be less likely to use guns to commit a crime. How’s that working out Chicago? LA? Not so well, methinks. What does work: armed resistance.

Aquila, Michoacán— Facing the demobilization of the autodefensas in the state, the coastal community of Santa María Ostula, located in the municipality of Aquila, found that members of its community police won’t be registering as rural police.

“Who we obey are the people, not the federal government”, they warned.

As borderlandbeat.com has been reporting, the civilian militias sprung up to end the intimidation, torture, rape and murder inflicted on the local populace by the drug cartels, with the active support of local police and the Mexican military. Despite the cartels’ bottomless financing and the U.S. supported might of the Mexican military, autodefensas have maintained power, and created security for their supporters.

The autodefensas are recovering the control from the coastal region and the Templarios have been fleeing in boats-including Federico González, El Lico, capo who controlled from Cerro de Ortega, in Colima, to El Faro, in Michoacán-, in car trunks or hiding in the Sierra Madre del Sur, the Nahua community took a break in order to revive their struggle and reconfigure their community police.

And now the Mexican government wants the autodefensas disarmed. Good luck with that. Or not.

From now on we will look after each other.  We take care of the residents and the residents take care of us…and watch out!  To those of you who try to disorganize us like in 2009.  After all the sufferings we’ve been through, we have to be very careful, we don’t forgive anyone who has ties to organized crime.

Needless to say, this story, where civilians take up arms illegally to defend themselves against criminal predation, is getting no play in America’s mainstream media. Arm the revolutionaries? You must be joking. By the same token, the MSM’s not giving airtime to those calling for America to arm the Ukrainians against the Russians. Or, God forbid, move U.S. military assets (e.g. a carrier group) into the area.

In both cases, it’s all about the money, money, money. Since the last Cold War, Europe has jumped into bed with Russia, Big Style. Wikipedia reports that . . .

The Russian Federation supplies a significant volume of fossil fuels and is the largest exporter of oil and natural gas to the European Union. In 2007, the European Union imported from Russia 185 million tonnes of crude oil, which accounted for 32.6% of total oil import, and 100.7 million tonnes of oil equivalent of natural gas, which accounted 38.7% of total gas import.

Since then, more. Literally and metaphorically, Russian has the EU over a barrel. The idea that our allies will turn the screws on their Russian trading partners to protect liberty and self-rule in the Ukraine is laughable. By the same token, there are plenty of American multi-nationals who oppose Russian sanctions by quietly putting a word in the ear of the Obama administration and their friends in Congress.

It’s the same situation regarding imposing hard-hitting sanctions against Mexico for their cartel collusion/autodefensa suppression. While American imports of Mexican crude to the U.S. have been declining, Mexico’s trading partner status is way too important to rock that boat.

As latimes.com reports, Mexico accounts for about 18% of North American auto production. Appliances, TVs, mobile phones – all built in Mexican factories and exported to the U.S. To the tune of some $150b per year. Not to mention the illegal drug trade, which is worth at least that much to Mexico’s balance of payments. Cash. An industry which has close friends at the highest levels of the Mexican government.

As the old misquote says, the business of America is business. Anyone who thinks that our foreign policy is based on liberating oppressed people and defending liberty isn’t paying attention. Sure, it gets a look in. But it is hardly the defining factor in our economic, political or military foreign policy.

Hey, and maybe that’s the way it should be. But whether we’re talking about Mexico or the Ukraine, the underlying truth is inescapable: the only people fully invested in protecting the people from tyranny and terror are the people being terrorized. Give them – the people, not their military – the means to defend themselves and they will. Just as we do here.