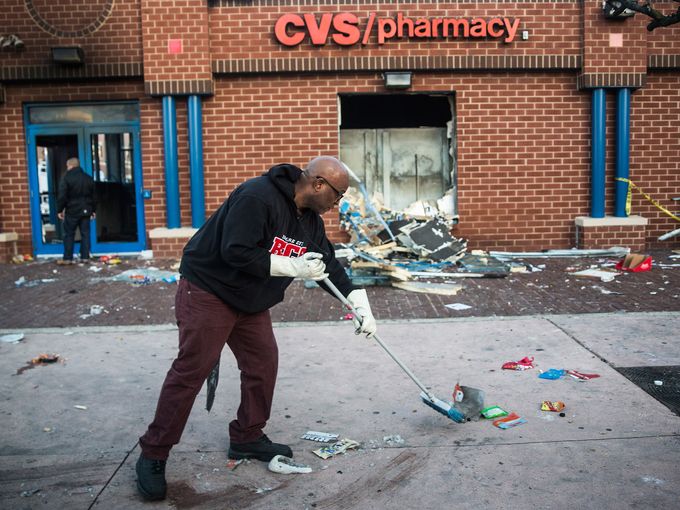 When the Mayor of Baltimore told a justifiably panicked public that she was giving “protesters” “room to destroy” she was speaking truth to powerlessness. Once again, the Mayor of a city abandoned law-abiding citizens to rampant criminality. Once again, peaceable people in an economically-challenged, ethnically-segregated section of a major metropolitan area were on their own, denied direct police intervention, powerless to stop wanton destruction and unprovoked personal attacks. People who could not take the law into their own hands – a regrettable but necessary state of affairs – because they’d been denied the tools to do so. But first, the police . . .

Pro-gun people like to point out the limits of the police’s “thin blue line” with a simple expression: “when seconds count, the police are only minutes away.” In this case, at the sharp end, the Baltimore police were hours if not days if not permanently away. And where the cops were on scene, they gave rioters “room to destroy.” Looting, burning, attacking random people and property – the cops were too busy maintaining a shoulder-to-shoulder cordon on major streets to directly engage and arrest the thugs tearing the town apart.

This is no small point. Baltimore Mayor Stephanie Rowlings-Blake had instructed the police to contain the rioting, rather than combat it. Containment served her political needs. It signaled the world that she “understood” the “protesters'” anger at the police incident that “sparked the rage.” It prevented incidents that could lead to accusations of “police brutality” that might make the rioting worse. At the same time, containment prevented the violence, destruction and theft from spilling-out into the city’s more affluent areas, where the real money (a.k.a., political power) resides.

One could point out that these areas have a higher percentage of caucasian residents and accuse the Mayor of racism but I couldn’t possibly comment. But I will say this: when push comes to shove, at that very moment, police and politics has nothing to do with it. It’s a simple matter of self-protection. They attack, you defend. Your life, your property, your loved ones, your community. You do it because no one else will. No one else can. At that point, you want the best possible tool for self-defense. You want a gun. On your person.

Maryland is what’s called a “may issue” state. Free State residents must prove their need for a concealed carry firearm to government regulators. Securing Maryland’s permission to carry a concealed firearm is an expensive, time-consuming, bureaucratic process, prone to delay. And failure. According to abc2news.com , just 2,095 people applied for a Maryland concealed carry license in 2014. Some 227 were denied. “Of that 227, 189 were denied under Maryland State Police code 0060: ‘Lacks good and substantial reason.'” So, what about this?

Maryland Gov. Larry Hogan declared a state of emergency in the city and activated the National Guard to assist city and state police, calling it a “last resort” to restore order.

Mayor Stephanie Rawlings-Blake called the rioters “thugs” and said the city was imposing a 10 p.m. to 5 a.m. curfew starting Tuesday. She said she asked Hogan to send in the Guard.

“We are deploying every resource possible to gain control of the situation and ensure peace moving forward,” she said.

And yet it damn well is, isn’t it? Perhaps not as good and substantial as “I have a natural, civil and Constitutionally protected right to keep and bear arms subject neither to the democratic process nor questions of social utility,” but perfectly rational nonetheless. As is the idea that the police should maintain law and order when it disintegrates. Before it disintegrates? How do you do that? Now there’s a question.

“In the days ahead, I intend to work with leaders throughout Baltimore to ensure that we can protect the security and civil rights of all residents,” Lynch said. “And I will bring the full resources of the Department of Justice to bear in protecting those under threat, investigating wrongdoing, and securing an end to violence.”

Are law-abiding Baltimore residents reassured by this paternalistic promise? Maybe. But not as reassured, not as protected, as they would be with a firearm.