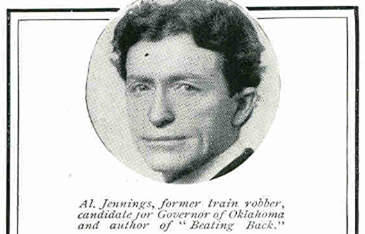 The text of this ad which appeared in the April 1914 edition of National Geographic is kind of blurry in the image.

It’s worth reading, so here it is in its entirety:

Al. Jennings, former train robber, candidate for Governor of Oklahoma and author of “Beating Back.”

This is Al. Jennings

He says: “Jiminy! It’s the Hottest, Fastest Gun I ever saw!”

“I am a candidate for Governor of Oklahoma and no longer an outlaw. I am, therefore, returning your Savage Automatic Pistol, as I shall never need such instruments any more.

“I could not resist the temptation of trying the vicious little thing and Jiminy! It’s the hottest, fastest gun I ever saw.

“I have never used anything but a forty-five. In the wild days of the past, I have kept a tin can rolling until there was nothing left.

“I rather hate to confess that this little devil has got the poor old forty-five skinned a hundred ways. It sure is some gun. My wife wanted to keep it to guard our home, she having shot the little gun with the same accuracy as myself.

“I thank you for your good intention just the same.”

No burglar attacks him. But you may tonight have a clash with a burglar in the dark hall or in the dining room. Will you get a Savage Automatic today and have Savage “life insurance” from now on?

No practice needed to be a crack shot. Aim just as you would point your finger. The Savage bullets hit as fast as you pull the trigger — 10 pulls, 10 shots. You always know buy the Indicator if the Savage is loaded — a touch or a glance tells, 32 cal. and 380 cal.

Send for a Booklet about what to do if you hear a burglar. Advice by the greatest burglar detective New York City every had. Free.

Phone your dealer now to send you up a Savage on trial.

Makers of the famous Savage rifles.

“Aims Easy As Pointing Your Finger”

Alphonso “Al” Jennings was a colorful individual to say the least. He was, at different times in his life, a prosecuting attorney, lawyer, ranch hand, and a not very successful train robber. In 1899 he was convicted for several robberies (most of which netted very little), but his life sentence was reduced to five years before he was freed on technicalities. In 1904 he received a presidential pardon from Teddy Roosevelt.

After his brief stint in prison he became friends with William Sydney Porter (better known as O. Henry) and published short stories and the book Beating Back. He acted in silent movies and then in 1911 became active in Oklahoma politics. After several failed attempts at election (including the gubernatorial run mentioned in the ad) he starred in a film adaption of Beating Back and worked in the motion picture industry as a technical advisor on westerns. Dan Duryea starred in Al Jennings of Oklahoma, a film biography of Jennings in 1951. In later life Jennings worked as a traveling evangelist and died in 1961 at age 98.

The Savage pistol with which Jennings was so enamored was the Model 1907. It actually started out as Savage’s .45 caliber entry in the competition for the Army’s next service pistol in 1907, but it lost to the Colt Model 1911. Savage then produced a smaller civilian version that used a 10-round double-stack magazine in .32 caliber from 1907 – 1920 and in .380 ACP from 1913 – 1920.  It is striker-fired and what looks like a hammer is actually a cocking lever. The entire gun snaps together, making it easy to strip. Although the ad refers to the pistol as “automatic” in reality it’s a semi-automatic.

Savage ads for this pistol emphasized speed of firing, accuracy, and how easily a woman could use the pistol. We have other examples of their ads which we’ll take a look at in the future.