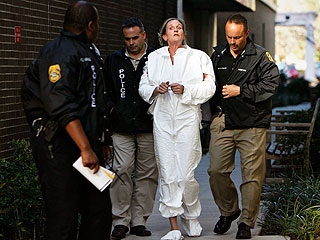 Another day, another mother who goes postal and kills her own kids. Tragic? You bet. Newsworthy? Thankfully. Still. But People magazine? I thought they limited their coverage to celebrity deaths/peccadillos/tragedies. Nope. Apparently, the magazine for those who find USA Today a challenging read has posted this story about a military wife who went off the deep end and shot her kids for mouthing off. (Looking back on my own upbringing – and not to make light of this tragedy in any way – I’m awfully glad my dad limited family disciplinary action to corporal, and not capital punishment.)

Evidently, the Floridian and wife of an Army Colonel shot her 13-year-old son in the head with a .38 revolver for mouthing off on the way to soccer practice, then drove home and shot her 16-year-old daughter in the head as she studied at her computer. Her husband, Col. Parker Schenecker, was in the Middle East at the time of the shootings.

As the parent of a soon-to-be 13-year-old daughter, I can testify that kids can talk back and get under your skin from time to time, even the really well-behaved ones (like mine). But I simply cannot imagine a situation where I would be tempted to even strike my child in anger, much less shoot her. EVER. Just not gonna happen.

I think every parent out there in TTAGland feels exactly the same way about their own kids. The anti-gun guys may like to portray those of us who  appreciate our 2nd Amendment rights as wild-eyed, redneck, trigger-happy idiots, who’d just as soon shoot as talk to solve every problem. But it’s not true. Which leads us back to Mrs. Schenecker.

Here we have a situation where someone who confessed to a family member to being depressed took a gun and ended the lives of her kids. Do I need to mention that this is not rational behavior? That this is the act of a mentally-ill individual? That there is no law, either on the books or proposed that would have prevented this tragedy?

On that last one, before the knees of those on the left start a-jerking, let me remind you of recent cases where mothers have drown their own children in a bathtub, and one where the mom strapped the kids in car seats, and sank her car in a body of water, claiming she’d been carjacked. Doesn’t require a gun in the house to murder your children. Doesn’t even make it easier to do so, frankly.

So what part did guns play in this tragedy? Well, to be blunt, a gun is a tool. Just like a hammer. Just like a wrench. Either of which could have just as easily been used to end the life of another human being. Saying that guns are to blame is irrational.

A gun didn’t kill those kids. A parent did. No “lock the guns up” law, “keep guns out of the hands of kids” law, “close the gun show loophole” law, or any other law short of a complete ban of all guns could have prevented this tragedy from occurring with a gun. (For you anti-gun guys in the TTAG audience, lemme spell it out for you: sans-gun, this highly disturbed mom would have simply chosen another weapon and, Bang, Bang Maxwell’s Silver Hammer woulda come down upon their heads.)

I don’t know this family. But I can only imagine the heartache they are feeling. When the mom is able to process what she’s done, I suspect she’ll be suicidal. I’m sure the dad is feeling all sorts of guilt right now, blaming himself for not seeing this coming. I’m sure the grandparents are beisdes themselves with grief. And I’m certain that this will ruin many lives.

Is there an answer? Could this have been prevented? I don’t rightly know. Perhaps mental health professionals have an answer. I suspect, we wouldn’t like any idea that could actually do something about this in advance, because, by definition, it would have to limit our freedoms as citizens, and run the very real risk of abusing whatever kind of law that would allow people to be arrested or committed on the suspicion of what they might do at some time in the future.

If you’re a religious person, I’d recommend that you pray for this family. Pray for your own, too. You never know when bad things may happen to good people. And while you’re at it, pray for wisdom, for everyone. Pray that we can all see this tragedy for what it is – something that was unavoidable, but something that has little to do with guns, and does not warrant what will surely be another avalanche of calls from gun-control groups to ban guns.