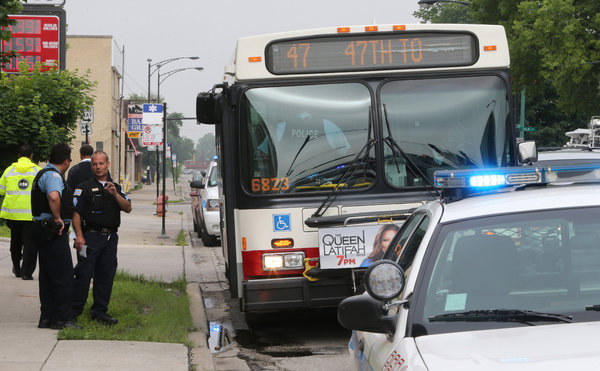 Woman wounded when gun goes off on CTA bus the chicagotribune.com headline proclaims. Why are guns riding the busses in Chicago? Don’t they know that’s illegal! Unless they’re being carried by a resident with a concealed carry permit AND the gun is unloaded in a secure (but not necessarily locked) container. There’s a reason for that regulation, other than the obvious (gun control laws are inherently biased against poor people). An unattended gun can go off! Check this out . . .

A woman was grazed in the leg while riding a CTA bus this morning when another passenger picked up an “unattended gun” from a seat and it went off, officials said.

A man sitting across from the woman noticed the gun, only about 3 inches long, and picked it up thinking it was a toy or a lighter and it discharged, police on the scene said.

The .22-caliber bullet struck a vent underneath a row seats and a fragment hit the 47-year-old woman around 6:35 a.m., police and the agency said. The fragment did not penetrate her clothes but she was taken to a hospital for observation.

The woman told WGN-TV she was on her way to work when she was struck by the bullet. She said there were not a lot of people on the bus at the time.

Sounds like someone missed the NRA’s Eddy the Eagle class at school. I wonder how many Chicago schools offer the program? Anyway, derringer? I just met her. And I know to keep my hands off her. Just sayin’ . . .