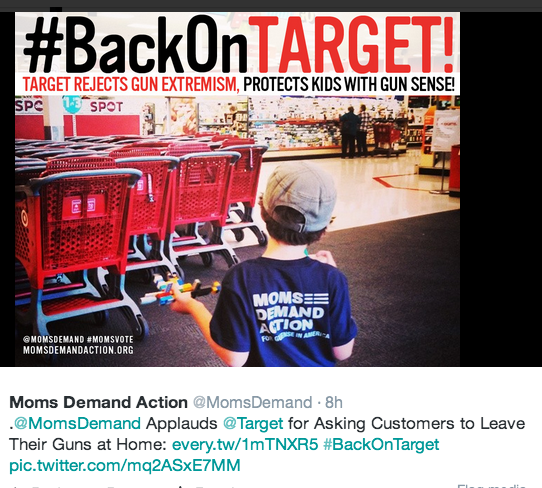 Earlier today, Target’s interim CEO made a statement “requesting” that its customers leave their guns at home. The decision came on the heels of pictures of members of Open Carry Texas carrying rifles in Target stores, and the subsequent anti-open carry at Target campaign by Moms Demand Action for Gun Sense in America. C.J. Grisham, president of Open Carry Texas, told USA TODAY in an e-mail [also published on their Facebook page] that he regrets Target’s decision . . .

While this is not a ban on legally possessed firearms in its stores, we will continue to honor our months long policy of not taking long arms into Target stores or any other business, time and time again, businesses that have asked guests not to bring legally possessed, self defense firearms into their establishments have seen their employees and customers victimized by criminals preying on the openly defenseless.

Open Carry Texas is laser focused on our statewide goals of making Texas the 45th state to recognize the right to openly carry firearms and the 32nd to do so without a licensing requirement. Engaging in the businesses of interfering with or making a scene at private corporations is something to which Open Carry Texas has never lowered itself, a practice we will maintain.