Before the NRA meeting, it was well known that open carry would not be discouraged. I entered Freedom Hall at the Louisville Kentucky Expo center this morning, as people were registering. Within a minute, I had spotted three open carriers, and managed to get pictures . . .

Drew and Susan Hebson were happy to have me take pictures of their open carried pistols. Drew said that when he and Susan had gone out for dinner the night before, they had seen quite a few people openly carrying holstered pistols. When others commented on it, he simply answered: NRA meeting.

While were were doing the photo shoot by an NRA table, a uniformed police officer was strolling by. I waved him over, to get another point of view. The officer said he could not give an official statement, but did not have a problem with an unattributed quote. He said that he did not have any problem with open carriers, and was seeing more today than at previous events. He volunteered:

Drew was carrying an FNH tactical .45,, Susan a Sig 9mm. Susan normally carried the Sig concealed, but uncovered it for the event. 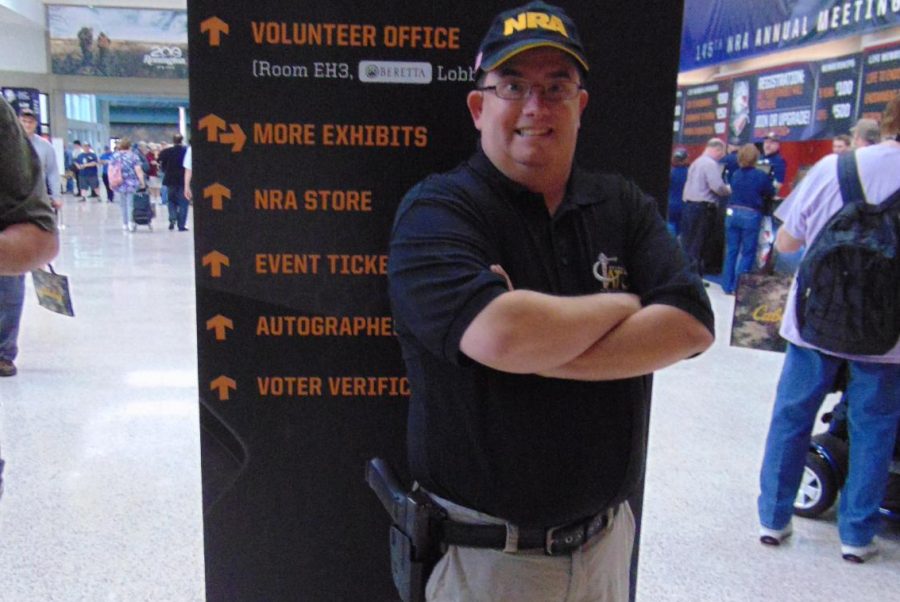 Another open carrier, Brian Mensing, said that he’d checked about open carrying before coming to the NRA meeting. Everyone that he’d talked to, starting with the State police and continueing from there, said that it was not a problem. He was open carrying a GLOCK 21. He said that he expects to upgrade his holster shortly.

In the past the NRA has been criticized as being hypocritical for having their annual meeting at venues that prohibited the carry of firearms, openly or concealed. Last year, in Nashville, Tennessee, there were rumors that firearms were prohibited. Those were quickly squashed with plenty of photographs of open carriers at the event.

This year, there seem to be more open carriers. Second Amendment supporters are winning the culture war. Open carry is becoming normalized as the legal exercise of the Second Amendment is being restored.

Texas became an open carry state as of 1 January, 2016. A legislative attempt to restore open carry rights in Florida was defeated in spite of strong legislative support. Florida is now one of only five states that prohibit the open carry of holstered pistols in most public spaces. The other four states are South Carolina, New York, California, and Illinois.