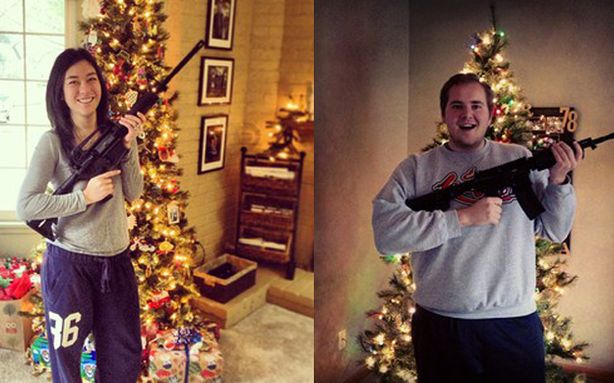 Dammit, the secret’s out. The Atlantic has discovered that (shhhhhhh!) there are large swaths of the country out there — whole states apparently — where people actually give each other guns. Military-style rifles even. As gifts. For Christmas! But hold on, that’s not the worst part. The worst part is . . . these people (if you can really call them people) are actually proud of their new instruments of death. I know! As author Rebecca Greenfield notes in horror, “the AR-15 is a popular rifle of choice these days both for consumers and murderers.” Still . . .

Some of these pathetic bitter clingers, after unwrapping their Bushmasters with the same amount of glee Ralphie did when he found the Red Ryder tucked back in the corner, then posed for pics and posted them for all the world to see. The brazenness! And after Newtown! Have they no shame?

Despite her obvious revulsion, though, Greenfield ends with a note of hope for the future:

Gun control didn’t stop these people from getting what they want for Christmas—at least not this year.