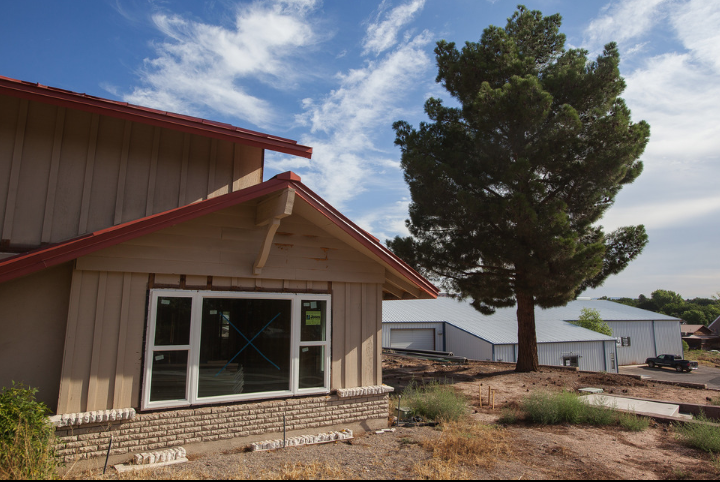 “As often as he can, Don Kimball works to renovate a big home that will offer secure apartments for women and children who have fled domestic violence and exhausted their time in shelters. But literally a stone’s throw away, a gunsmith shop [Dixie GunWorx] plans a shooting range with 11 lanes, one for tactical weaponry used by law enforcement, that point at Kimball’s property.” But? You’d think that sltrib.com, a paper publishing in gun-friendly Utah, wouldn’t see any problem with a gun range and a woman’s shelter in close proximity. In fact, you might think that they’d think it was a good idea; with all those law-abiding armed Americans nearby the word “deterrence” springs to mind. Apparently not . . .

Sue Kimball, who with her husband founded the Erin Kimball Memorial Foundation 14 years ago, says the idea that their tenants might hear the gunfire “makes me sick.”

Erin’s and the children’s lives, she said, “ended with gunshots, and the only thing we have on the death certificates is multiple gunshots to all three of them. It’s such a violation of our work and of our daughter, literally.”

Literally? That’s a bit strong. Anyway, I’m confused. How is a gun range a “violation” of the Kimball’s work with domestic violence? Hoplophobia! Trauma creates a subconscious stimulus – response pattern linking gunfire and the fight, flight or freeze response (a.k.a., “panic attacks”).

Yvette Rodier, who survived multiple gunshot wounds in 1997 at Little Dell Reservoir, tells of her ongoing torment from the attack. Firearms, a balloon popping, gunshots on TV, a car backfiring and fireworks all leave her frozen in place, her heart beating wildly.

“Exposure therapy” is a recommended treatment for phobias. Basically, if you experience the stimulus/trigger often enough your subconscious mind says FTS and tells your adrenal gland to stand down. (It’s the same principle behind operational familiarity.) So living next to a gun range could cure Ms. Rodier. While we’re at it, how about turning fear into power?

[Dixie GunWorx’ CEO Chris] Michel told Fox13 TV in August that he’s thankful to the Kimball home “for what they do for the victims themselves. [We hope they] take some of our classes. We would love to do that for anybody that’s been that kind of a victim, for free. Some of the classes we’re going to be able to help them with are self-defense, home defense, rape prevention.”

But Sue Kimball, herself a victim of violence in her first marriage, told the council that the Erin Kimball Foundation “is a place for families fleeing domestic violence and … trying to get away from knives and guns, any form of weapons.”

Yes there is that. People treating people who’ve experienced domestic violence can give them a false sense of security and encourage them to think of themselves as victims. Or they can teach them how to harness their situational awareness and defend themselves against those who do them and their loved ones harm. The local planning board didn’t quite see it that way.

In the end, the Planning Commission voted 3-2 to deny the permit. Barely a week later, the mayor and City Council, acting as the appeal authority, granted it. The authority was working as a “quasi-judicial” body, meaning there was no testimony, and its decision cannot be administratively appealed. A yearly compliance review will be required . . .

Kirk Smith, a former Washington County sheriff and a veteran of the Utah Highway Patrol, sits on the board of the Erin Kimball Foundation . . . “We want something better. The Erin Foundation offers peace and help,” he said. “It hurts when you hear other people who think target practice is more important.”

On Friday, foundation leaders filed a lawsuit against the City Council over its approval of the range, calling it “illegal, arbitrary and capricious, and not based on substantial evidence.”

What a waste of time, effort and money. The road to hell and all that.