As you’re likely aware, the U.S. Military is holding a competition for a new pistol. It’s called the Modular Handgun System, or MHS, and the winning gun is slated to replace the Beretta M9 to the tune of up to a $586MM contract. As I’d guess few were aware, CZ was thinking of throwing its hat into that ring and went so far as to manufacture a very limited number of P-07s and P-09s, in 9×19 and .40 S&W, for MHS submission . . .

CZ ended up choosing not to enter the MHS competition after all, at which point the even smaller number of these pistols that had been imported into the U.S. went up for grabs. I caught wind of this, made some calls, and the MHS P-09 seen here is now mine all mine. Also, muahaha! 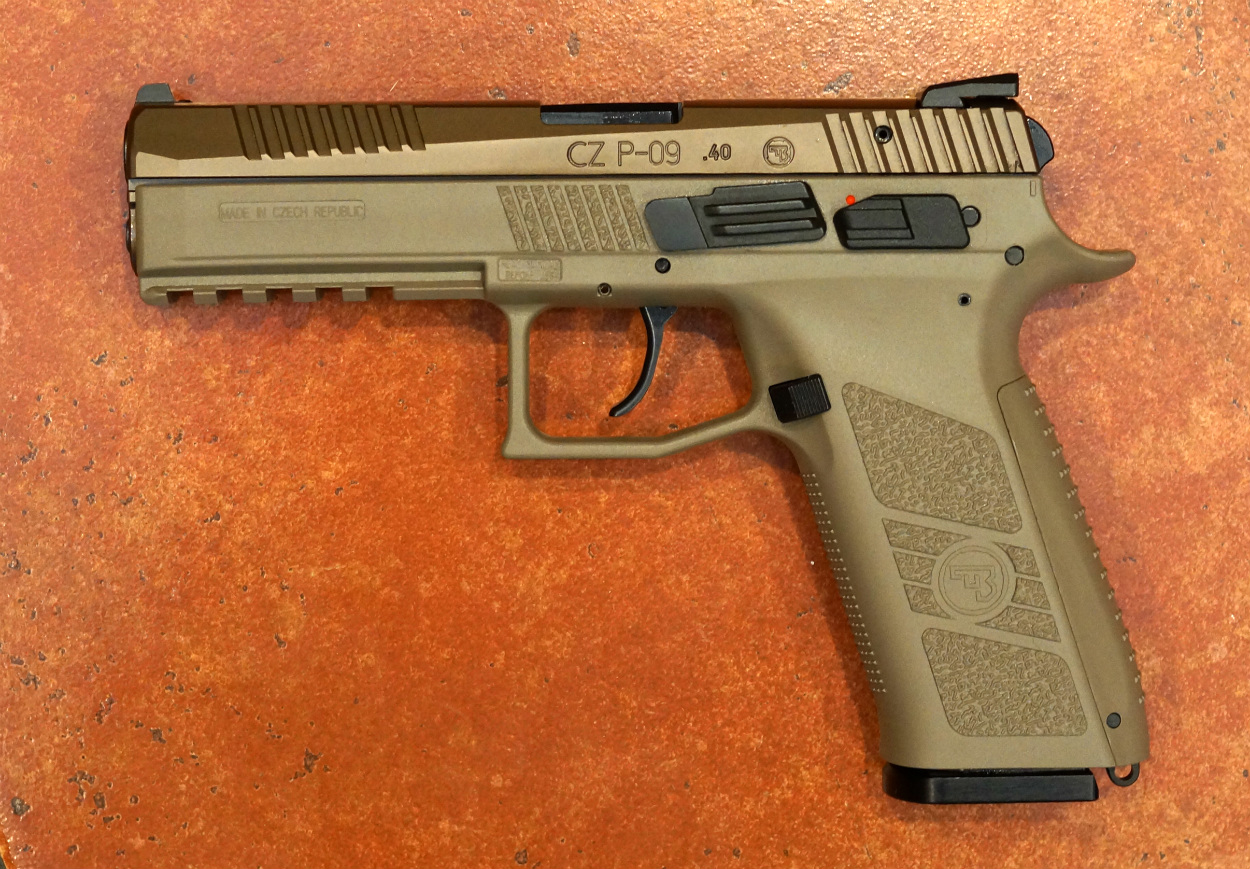 With that out of the way, let’s talk numbers. Unknown to me is how many test mules and prototypes were made and either kept or destroyed by the factory, but I was able to confirm how many of these rare birds were imported into the U.S.:

Two of the biggest Modular Handgun System requirements are satisfied by any P-09 and any new P-07 (not the previous “P-07 Duty” models, though): a Picatinny accessory rail for mounting lights, lasers, etc., and a modular grip size to facilitate ergonomics, an easy reach to controls (slide release, safety, magazine release, trigger), and effective recoil control. The grip size options should at least accommodate shooters with hand sizes from the 5th to 95th percentile, and must be adjustable at the operator level. 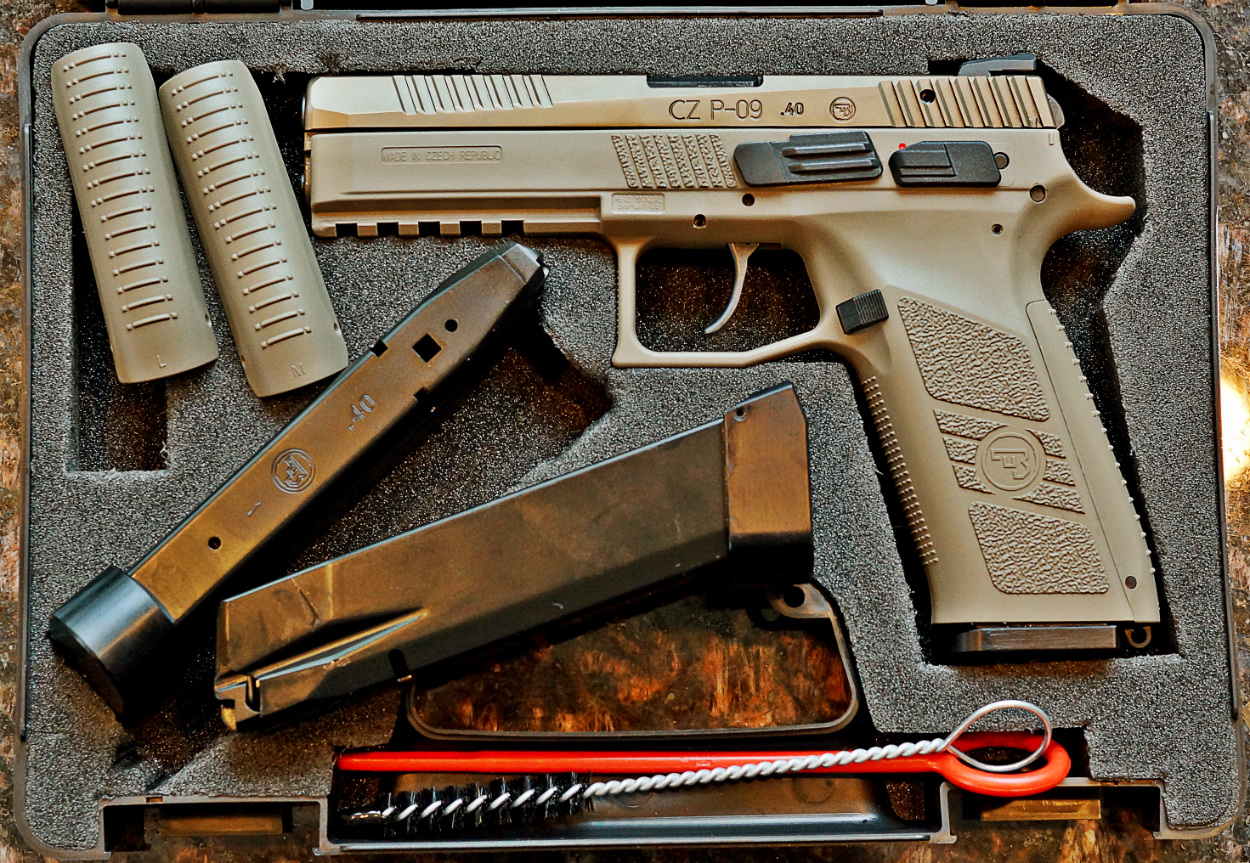 Another of the military’s MHS requirements is both standard and extended capacity magazines. Included in the box with these CZs is one standard mag and two extended, all with aluminum baseplates that conform to the MHS magazine protrusion specs. In 9mm, capacity is 19 rounds flush fitting and 21 in the tall boys, while my .40 holds 15 and 17.

That isn’t Cerakote on the slide. It’s nitrided like the P-07 and P-09 slides normally are, and then it receives an Ionbond treatment (which I think is their Decobond). The frame is molded from FDE-colored polymer, rather than coated, and the chemical composition of the polymer has been slightly tweaked to ensure it passes the Mil-Spec drop test even after 30,000 rounds of .40 S&W. The goal here with the color scheme is to satisfy the apparent MHS requirement of a non-reflective, neutral color. MHS marking requirements include serial numbers and other information, such as the manufacturer’s contractor cage code, in various places on the firearm. A QR code (Data Matrix ECC 200) is required for inventory, maintenance, and other tracking purposes. These MHS CZs get a special plaque in front of the right side safety with that cage code, the part number, the serial number, and the QR code on it. Proof marks are required to show that the firearm has passed tests with over-pressure ammunition. In the case of the P-09 here, the CIP over N marking means 30% over standard C.I.P. pressure (a Euro version of SAAMI standards). The two-tailed dancing lion guy means it was proofed at Czech Proof House in Prague, and the 15 means it was manufactured in 2015. CZ’s MHS pistols have a bobbed hammer and are, interestingly enough, double action only. I can’t really explain this, as I’d expect it to hurt the CZ’s performance in the “shooter in the loop” accuracy testing and the shooter subjective feedback impressions category. Better Warfighter accuracy than the M9 is an MHS requirement, but a DAO trigger is not. It may keep some soldiers from shooting themselves in the foot, but if CZ actually submitted these…well…you know where I’m going with this.

To be fair, MHS guns must be “other than single action only,” but I still find it odd that CZ went with DAO instead of its normal DA/SA mechanism. If anyone’s interested in the real nitty-gritties, the MHS CZs also have special trigger pins and trigger return springs.

An external safety mechanism is an MHS requirement, and ambidextrous controls (or at least ones that can be swapped from one side to the other by the operator) are desired, so these CZs come with an ambi thumb safety installed and the magazine release can be moved to the right side. No decocker is included in the box (like it is with a normal P-09/P-07) as, obviously, it would serve no function on a DAO gun.

Although I couldn’t find it anywhere in the Modular Handgun System RFP, a loaded chamber indicator is built into the rear of the extractor. It’s another feature unique in the CZ line to only these MHS guns. The LCI protrudes and offers tactile indication that a round is in the chamber. Visual, too, but it’s pretty dang subtle as far as LCIs go. Sights are 3-dot, Tritium night sights of standard height. It seems like most companies’ MHS guns all have threaded barrels and tall sights to meet the Modular Handgun System suppressor-ready mandate, but the text of the RFP states that these features don’t have to be standard equipment. Instead, a “suppressor kit” can be provided separately with threaded barrel and tall sights, and to these ends CZ was clearly intending to supply a limited number of thus configured conversion slides.

At the end of the day, it sounds like CZ decided against entering the MHS due primarily to the “S.” System. The submission isn’t just for a handgun, but for a complete system including sound suppressors and multiple types of ammunition. I believe CZ has a good relationship with Czech ammo manufacturer Sellier & Bellot, but ammo and silencers aren’t CZ’s specialty and mixing in these other variables adds significant cost and complexity. Indeed, submitting for the MHS test at all is a huge investment with no guarantee of any return.

Heck, the entire test may never even result in a replacement handgun in the first place. In this case, though, it did result in a nice little unicorn to add to my stable.