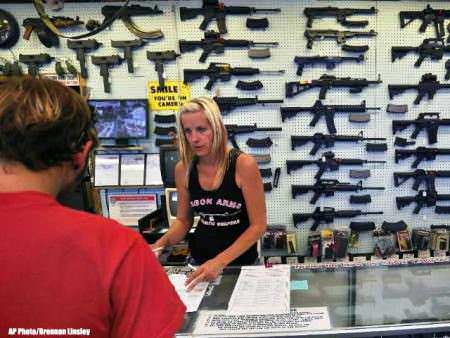 The NRA-ILA writes [via ammoland.com]:

We’ve covered – and debunked – the claims that firearms sales are significantly declining under the Trump Administration. The latest FBI report on NICS checks for March 2017 should help put any lingering claims about the “Trump Slump” to bed.

NICS checks aren’t a direct proxy for firearms sales – not every check is related to a sale, a single check can be used to purchase more than one firearm in a single transaction, not all sales are completed even after an approved NICS, etc. – the National Shooting Sports Foundation proposed an interesting way to improve the proxy.

They devise the total number of NICS checks by removing those explicitly for permit or permit rechecks. While this will still not capture all firearms purchases (since some locales require a permit to purchase and so run a background check for the permit itself instead of at the point of sale), this calculation does likely get us closer to the number of firearms sold per month.

March 2017 is number 10 in the total number of checks since January 2008 and cracks the top 20 for estimated sales (number 17, to be exact). Just over 1.35 million firearms were sold in March 2017 according to this estimate.

The well-covered theory seemed to be that purchases would subside once the “threat” of Obama and Clinton policies were exhausted.

The numbers tell a different story. Using the estimated sales calculation, the number of purchases has increased in each month of 2017.  Actually, the average number of purchases in the first 3 months of 2017 is just 1% lower than the average of August through October 2016 (excluding the typically high sales month of December and November to prevent any electoral uncertainty from skewing our conclusion).

While we don’t have data on when purchasers decided to make a purchase, a reasonable assumption would be that the increase in late 2016 could be attributed to a desire to complete a planned purchase sooner to avoid the worst possible outcome of the election.

The increase in sales-related NICS checks each month of 2017 suggests that fear of anti-gun policies isn’t the driving force behind firearms purchases but perhaps simply a factor in the decision on when to purchase. Or, put another way, Americans’ commitment to liberty, tradition, and self-defense isn’t dictated by political developments.