The GM6 Lynx is only 44.3” long even with its 28.7” barrel. “Due to the bullpup configuration, most of the weight is re-distributed to the rear of the rifle allowing for the possibility of off hand firing,” the company’s website kinda promises. “This is near impossible with most other .50 BMG rifles.” 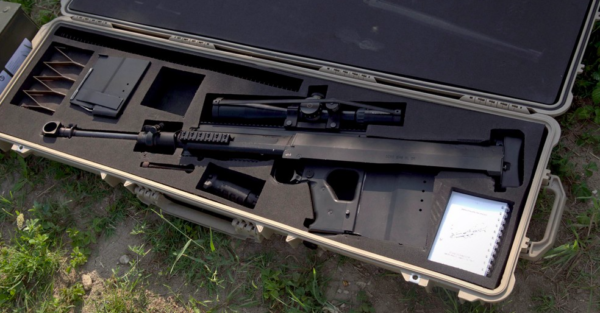 Don’t forget to pick up a spare five-round magazine — for just $375 USD. The gun ships inside a proper Pelican case with cut inserts. So there is that.

The GM6 can be transported with the barrel and bolt locked to the rear which makes it even more compact. The barrel is released by pressing a button at the front of the barrel jacket. Careful! It will also load the rifle if a loaded magazine is inserted. The company claims the long recoil system can achieve sub-MOA groups with its match grade Lothar Walther barrel. With .50 BMG, but likely not off hand.

Tactical Imports of Canada will now ship one to your FFL. Well, after a six-month special order wait. Check out their website here. Don’t have the full $11,999 on you? Don’t worry, they offer layaway. Seriously.