Let’s face facts. You and I along with most of the TTAG readership will never get the opportunity to own a big boy machine gun, and the chances of getting to shoot one aren’t much better. But RAP4 just might have the next best thing in the form of their machine gun paintball markers. The Breda M37 in the photo above will set you back about $4500 plus a nominal shipping fee. That might sound like a lot, but compared to the pricing for a true to life machine gun, that’s a steal! . . . 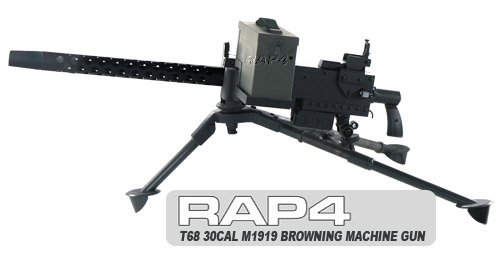 But the fun doesn’t stop with with the Italian Stallion Breda. Perusing RAP4’s custom marker page, you can see that for (just) a few thousand dollars you can also pick up your very own Browning 1919 clone. RAP 4 has this to say in the product description.

T68 M1919, a paintball-only version of the field machine gun that revolutionized ground and air warfare. This full size, metal reproduction of the M1919 is true to scale, look, and nearly to weight…and comes with a tripod to help you manage the heavy firepower it puts downrange.

The M1919 is known around the world as a symbol of sheer domination. Carried into massive ground battles, it was a force multiplier that secured objectives and obliterated obstacles. Mounted to airplanes, it helped usher in the era of aerial combat…and in Vietnam it turned helicopters into weapon platforms. Now you can bring that look, that image – and something of that firepower – to bear in your next scenario game.

At the heart of RAP4’s T68 M1919 is the proven T68 mechanical system. Used in the award-winning T68 M4-style markers, the open-bolt, precision-tuned action is a standard for reliability. Around that powerhouse we’ve used M1919 blueprints to build the very likeness of its progenitor…

…and then we amped it up with an electronics package to give you open-play-legal semi auto, and true full auto modes of 400+ balls per minute. That’s just like the real thing – that’s As Real as it Gets!

The M1919 draws paint from the attached ammo box, you get a reliable supply of paint from any angle, up or down, sideways for any fire fight condition. The ammo box also helps you keep the opposing force suppressed with its 400+ rounds carrying capacity.

The extended barrel is covered with a heat shield, and the open, metallic sights will help you lock on target at any range. The anti-aircraft swivel mount and tripod affords full articulation, from straight up to straight down, and it can swing around in full circles should your foes get behind you. When it’s time to relocate, quickly disconnect the T68 M1919 from the mount and charge after the action.

Use the T68 M1919 for base defense, or work it into the game as an objective to capture. Mounted in the doorway of a “downed helicopter” or atop a real paintball tank, the T68 M1919 will give your team unstoppable firepower…and the psychological advantage to dominate the field.

I’m not saying that I’d personally spend $2500 on a 1919 clone, but I imagine that over the course of my life, I’ve spent at least the sum of $2500 on dumber pursuits. Pair that thing up with some of RAP 4’s Rubber Training Balls at $0.12 per ball (reusable!) and you have a device that packs a real wallop.

A 30 day wait time, $2500, and you can own your very own full auto 1919. Load it up with paint and get to mowing down other players on the simulated battlefield. If you actually own this beast, drop us a note in the comments and let us know what you think.