At the NRA convention in Nashville, RF learned that Smith & Wesson was replacing the existing trigger on their M&P pistols with a new “enhanced” trigger. (Currently sold as standard on Shield semi-automatics). Already ecstatic at Smith’s decision to take over the entire pistol range at Best of the West Shooting Sports for the 2015 Texas Firearms Festival, TTAG’s main man was thrilled by the news. Smith sent TTAG two M&Ps to sample the difference between a Performance Center trigger and the old trigger, ahead of the new, enhanced trigger. He passed the guns on to me . . .

I immediately discovered that the Competition Optics Ready Equipment (C.O.R.E.) Pro Series version of the Smith and Wesson M&P40 is about twice as good as the stock version. In other words, what a difference a trigger makes.

It has always surprised me that the company I have come to use as a model for smooth factory triggers in revolvers sold their M&P semi-automatic handguns with what has to be one of the worst stock triggers on the market. It’s not that the M&P triggers are too heavy or too long. They’re just sloppy and gritty, with no consistency through the pull. Unless you count consistently bad.

The C.O.R.E. version is a different beast altogether. The Performance Center trigger feels a little lighter. But that’s not the key difference. The PC trigger feels much smoother and breaks much more cleanly. The grit and catch found in the previous stock trigger is gone. The reset is much sharper. I can feel exactly where the trigger is during firing, where the stock version provides nothing more than a squishy guess.

It bears repeating: the two triggers are worlds apart apart. And it’s not just me saying it. Three different shooters ran both the C. O. R. E. gun and the standard M&P. Everyone was surprised there could be that much difference between them. To a man they all agreed that every one of S&W’s M&Ps should come like this. And they will – kinda. As stated above, Smith & Wesson is gradually putting a new [what they call] enhanced trigger into ALL of its M&P pistols. This Performance Center trigger is not that trigger.

TTAG will be testing the enhanced trigger vs. the standard trigger ASAP. And pitting an Apex drop-in M&P trigger against BOTH the Performance Center and the new enhanced trigger and (what the Hell) the soon-to-be-old trigger. Confused? Don’t be. The most important point: trigger quality is key to accuracy. How important? I shot about 4.5 inch groups from the stock M&P40 at 25 yards off a bag, versus 2.75 inches for the C.O.R.E. Pro Series M&P40. I fired the exact same PPU FPJ factory ammo. That’s huge. 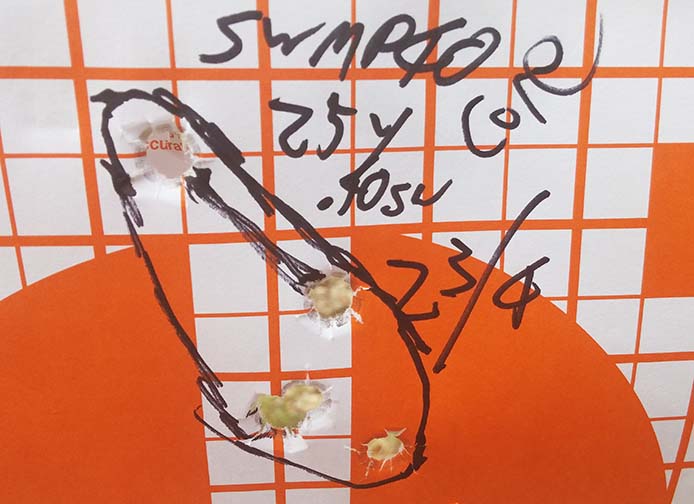 That settled, I had a look at other difference between the guns . . .

Smith equips the C.O.R.E. M&P .40 with more aggressive backstrap grips. Regardless of what size backstrap I fitted to the gun, it felt much better in my hand than the standard version. The C.O.R.E.’s slide also comes equipped with a mounting place for several different optics, it’s red-dot ready right out of the box.

The Performance Center model also arrives with high sights – almost twice as tall as the stock sights. The sights themselves are nothing special, but they are just high enough to co-witness with an auxiliary optic. If you fit the handgun with a threaded barrel the sights will clear your silencer (depending on the size of the chosen suppressor).

Sights this high also enable one-handed racking on your pants, belt, boot, teeth, whatever. That said, the sights also kinda scream “SNAG ME!” That said, drawing the C.O.R.E. M&P .40 from an OWB holster with a shirt tucked-in was a snag-free experience.

According to the S&W website, the stock M&P40 costs $569. The C.O.R.E. Pro Series gun runs $769. That’s a pretty big price differential. I think it’s worth it. While I could do without the optics and the grip package, the PC trigger alone is worth the price of admission. And now the bad news . . .

The 9mm version we shot for comparison ran like a champ. We put about 300 rounds of mixed factory ammo through it with zero issues. I’d trust that gun. In .40S&W both the stock version and the C.O.R.E. Pro Series handguns had failures to feed on the first magazine. Both were brand new guns. I have something of a [well deserved] reputation for being able to “break” any gun. To allay the inevitable criticism, I bore-snaked and lubed-up both guns – and still experienced repeated failures to feed. No first round failures, all after the first were remedied by re-racking the slide. It didn’t matter if it was fast fire or slow, off a bag or off hand, new shooter or experienced shooter, the gun failed over and over again. I put 75 rounds each through both of these guns, feeding them the PPU and Winchester White Box FMJ ammo. Even so, maybe it was just ammo selection that hung-up the .40 cals. Again, the 9mm M&P pistol didn’t have any – as in none – of these issues. Back to the trigger . . .

The trigger on the C.O.R.E Pro Series elevates the M&P’s action to the quality that made S&W revolvers the sine qua non of wheel guns. So much so that you wonder what Smith’s Performance Center will do now to justify the price difference between the high-end models, once the lesser-priced guns receive the new enhanced trigger. So much so the improved M&P lineup will soon take its rightful place next to Walthar PPQ’s and FN’s models in the pantheon of pistols with accuracy-enabling out-of-the-box trigger excellence.