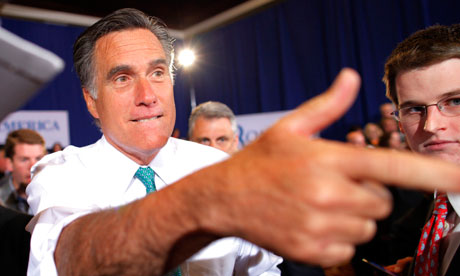 There is an ancient Vulcan proverb: Only Nixon could go to China.

This enigmatic epigram comes to us straight from that most mysterious of Vulcans, Commander Spock. What can a 23rd-century Starfleet officer tell us about the politics of gun control and the 2012 presidential election? It suggests a worrisome possibility…

First off, what does it mean that “Only Nixon could go to China?” Wikipedia puts it succinctly:

As a political metaphor, it refers to the ability of a politician with an unassailable reputation among his supporters for representing and defending their values to take actions that would draw their criticism and even opposition if taken by someone without those credentials.

We all know that Romney’s pro-gun credentials are anything but ‘unassailable.’ But remember that only anti-communist Nixon could establish relations with the communist People’s Republic of China, while Johnson would have been roasted alive for such a ‘pinko’ capitulation.

And only Bill Clinton (of the ‘tax and spend’ Democratic Party) balanced the federal budget and institute significant reforms in the federal welfare system and negotiated the NAFTA treaty. He faced significant opposition from his own party in doing so, but he got it done with Blue Dog Democrat and GOP support.

In short, this means that sometimes only a Republican can successfully advocate a policy that contravenes the traditional Republican agenda. And ditto for Democrats.

Since The Mittster isn’t particularly renowned for standing firm to his principles (whatever they are), I’m concerned that this phenomenon might prompt him to reach across the aisle in mid-2013 with a bold (read: draconian and misguided) gun control initiative. Guns and gun control don’t really seem to be part of his belief system one way or the other, but he might throw gun rights under the bus solely for the purpose of buffing up his bipartisan credentials.

This move would certainly infuriate the libertarians and gun owners in his base, just as Clinton’s support of welfare reform and NAFTA enraged the poverty lobby and the labor unions. But we can count on a few Blue State Republicans to stand by their suddenly ‘moderate’ president, and they would join the entire Democratic caucus.

Either way the election goes, our 2A rights are far from guaranteed.

What does all of this mean? Only that nothing is for certain during or after this presidential election. As they say, the only certain thing in life is change, and you can’t even count on that.