Jesus Campos is the Mandalay Bay security guard shot by spree killer Stephen Paddock before the murderer opened fire on a crowd of 22,000 concert goers. A week after the incident, Mr. Campos agreed to interviews with NBC, ABC, CBS and Fox News. Mr. Campos was a surprise no-show . . .

His union boss revealed that Campos “disappeared” immediately after a private meeting with MGM Grand executives. Campos re-emerged in public via the Ellen show [full interview below]. That seems a strange choice. Or not.

Assuming Ellen’s deal with slot maker IGT follows standard practice, the comedienne received a licensing fee for signing on and a percentage of every dollar spent by gamblers.

Given the time Ms. Degeneres devoted to the machines on her TV program, social media and through personal appearances — publicity worth tens of millions of dollars — her payout must be well into seven, maybe even eight figures. And ongoing.

In short, Ellen is in Las Vegas’ pocket.

So when Mr Campos’s MGM handlers apparently nixed his interviews with actual news programs and arranged a spot on the Ellen show, Ms. Degeneres was ready, willing and able to give the guard a platform to promote the idea that he was a hero.

‘MGM was behind the decision to call off all the interviews and did a deal with Ellen, knowing she would not play hardball on the timeline as long as she had the exclusive,’ a TV insider told DailyMail.com.

While that sounds more than a bit like a made-up source, it’s certainly true that the celebrity chat show host failed to ask the security guard the critical question which would have established his “courage”: what happened when? The third version (above) followed a press release by MGM Grand. The casino operator’s timeline “answered” serious questions about the hotel’s response to the shooter raised by timeline number two (below).

Specifically, the gap between the moment Stephen Paddock shot security guard Jesus Campos and the moment Paddock opened fire on the crowd below his room shrank from six minutes to forty seconds.

Crucially, both MGM and Clark County’s timeline number three makes no mention about when — or even if — Mandalay Bay security called the Las Vegas police to raise the alarm about an active shooter. 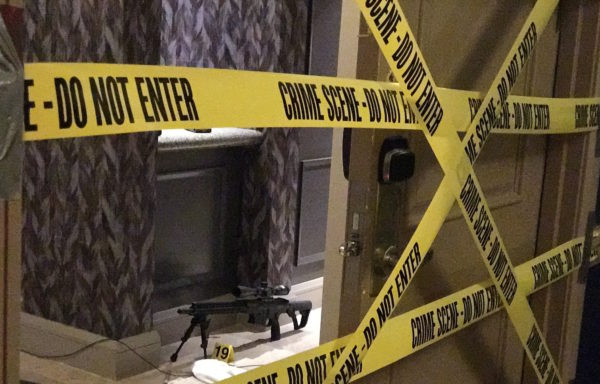 Mandalay Bay and its corporate owner MGM Resorts have been ordered not to destroy anything that could be considered evidence in a civil negligence trial over events related to the Route 91 music festival. The order was sought by attorneys who represent Rachel Sheppard, a California woman who survived the attack, despite being shot in the chest three times.

The American mainstream media has dropped the ball on this story, preferring to highlight efforts to outlaw the pieces of plastic Stephen Paddock attached to his AR-15s and the 100-round ammunition magazines he used during his attack.

Truth be told, security guards and law enforcement can’t always prevent evil people from carrying out evil acts. But they can be prepared and react when they such an attack occurs. And they should be held accountable for their actions afterwards, so that we can learn from their successes. And failures.