The report above is entirely misleading. The Mexican military controls the town of Apatzingan. Mexican revolutionaries (a.k.a., self-defense groups or vigilantes) control the countryside. So it’s not the Knights Templar drug cartel vs. government troops protecting the locals. It’s the Knights Templar allied with government troops vs. inhabitants. To regain control of the region from the locals, the Government has pacified the drug thugs – by secret agreement – and called for the revolutionaries to register their members and arms. So far, only eight out of twenty such groups have cooperated. Allegedly. The Government plans to bide their time, withdraw quietly and let the drug thugs exact retributions as and when. Then it’s business as usual for the cartels and the Government gets its vig. What if the revolutionaries don’t put down their guns? Will the Mexican Government turn on the them? Count on it. Meanwhile, Borderland Beat reporter J writes on the endless War on Drugs . . .

As violence, insecurity, with a glimmer of hope consume Michoacan, several hundred miles away, and Chino Antrax awaits extradition from Holland to San Diego, across the Atlantic, the integral parts of the business remain.  Sometimes lost in the headlines, substantial or interesting seizures continue, in timeless fashion, with shipments of product moving north, and money and weapons heading south.

January 22nd 2014: In the mid afternoon a 52-year-old San Diego man was stopped as he attempted to cross the San Ysidro border into Tijuana. He was driving a 2011 Sienna minivan, and carrying 17 high-powered weapons parts, and 64 boxes of ammunition, about 2500 bullets total, and seven magazines. He was placed into the custody of Homeland Security, with an immigration hold.

That same week in Tijuana, a man linked to Caballeros Templarios, a weapons broker and buyer for the troubled cartel, was arrested Manuel Alejandro Zuniga Garcia, ‘El Pelon’. He made statements to the PEPOS (Special Police for organized crime), saying in essence he was in Tijuana to buy weapons to take to Michoacan, coordinated by his two uncles, one in the States, and on in Michocan. He was in Tijuana to receive a shipment of weapons.

January 23rd 2014: Last week at the San Clemente U.S Customs & Border Patrol checkpoint, between Tijuana and Los Angeles, officers intercepted 670 pounds of cocaine, from a 2011 Hyundai Elentra. It was nearly 1:30 am when the compact car rolled into the station, likely eerily vacant, with piercing floodlights and tired agents, on their third cup of stale coffee from the break room. The man, 54 was dressed in a suit and tie, which is odd for the hour, and after discovering he was not an US citizen, as claimed, he was pulled over for inspection. 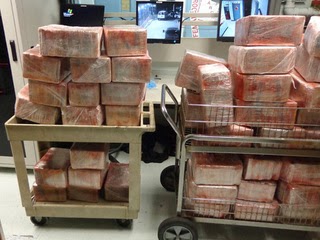 K-9 units alerted on the car, and officers pulled out 45 cardboard boxes, each neatly packed with wrapped kilos of cocaine, 304 in all. His name was not released, and he was turned over to the DEA. The San Clemente station is known to be open sporadically, perhaps between the late hour, and the haphazard details of a large shipment, it could be speculated that someone assumed the stop would be closed. Yet, there was no front car, or run through to check, on the smuggler’s part? At that late hour? A suit & tie works for early morning, or evening, even midday…yet stands out at 1:15 AM. Likely nothing will ever be known about the driver, or his case, or the origin of the seized drugs. It is very possible this wasn’t a random interdiction. 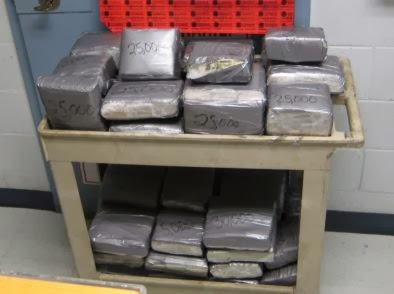 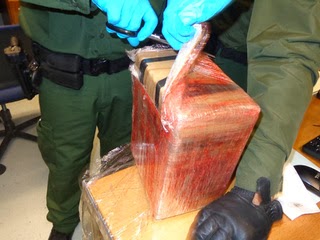 January 28th 2014: Less than a week later, a Uzbekistan national, permanent US resident was stopped, driving a car carrier, northbound.  National Guard members, after a K-9 alert, performed an X-Ray inspection, which led the Guardsmen to irregularities in the bumpers of two Acura MDX’s on the back of the carrier.  The bumpers held 49 bundles of cash, with markings indicating amount, and covered in silver duct tape.  The packages held 1.5 million in US currency.  The money, the cars, and the driver were all detained and held.

The same day in Pine Valley, interstate 8, 15 pounds of cocaine were seized from the frame of a vehicle.

Two days later, a U.S. [Customs and Border Patrol] unit patrolling the I-5, stopped a vehicle headed south, and discovered a 39-year-old Mexican national, with a valid Visa.  Also, carrying 10,000 in his pockets, and 49,900 in a jacket, and a bag in the vehicle.  He claimed the 10,000, as his, denying knowledge of the other stash.  He was remanded to the custody of the Department of Homeland Security. 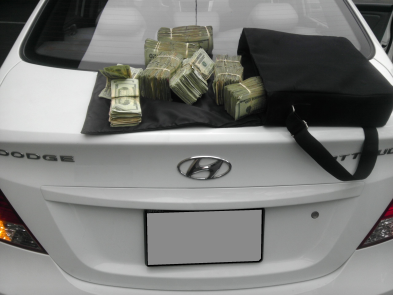 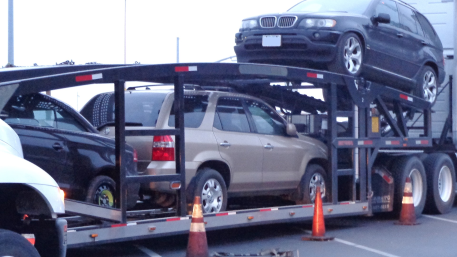 Are there links and interconnected webs of commerce, investigations, and alliances?  Certainly.  I cannot begin to unravel them here, leave the readers to their own conclusions.  Is the Uzbekistan national and the 1.5 million, headed north linked to organized crime in Mexico, and the US? Or different syndicates at play?  Money from down the coast, prostitution, drugs, stolen goods, headed to Russian bosses in LA?  Or was it related to drug sales and Mexican TCO’s?  Going to LA to be laundered, or transported south, via ship or plane?  Invested in property?

There are rumors in San Diego, and unofficial statements pertaining to the triple murder of three San Diego young adults, in late December.  Two were found murdered on Christmas Eve, at a mall, in a violent late night shooting.  A brother of one of the victims, and fiancée of the female victim was found weeks later, decomposing in the trunk of his Camry.  Italians from Utah with no record, who worked in a small Italian restaurant, owned by family members, nonetheless drugs and money are the whispers.

Blood, drugs, money, investigations, arrests, articles, it all wears on in a tireless, endless, existence, for everyone involved.  A civil war rages in Michoacan, the crystal crosses the border, and an addict burglarizes a home, or steals a car, high on meth.  7.62’s rip through birthdays, school clothes, flesh, bone, and leave nameless victims laying in a burning state.  Prices rise, spokesmen and women give statements to the press, people get their 35 years, and final words to the District judge.  And, it all means nothing, or everything, dependent upon your perspective.