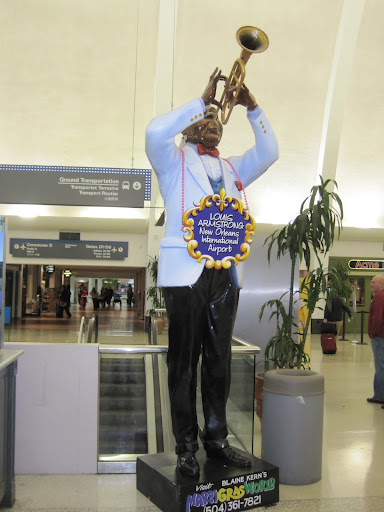 Okay, so you’re gonna fly the (un)friendly skies. And you’re planning on taking along a firearm. You call the airline to make sure you follow procedures. You learn that you must have the weapon unloaded, in a hard-sided, lockable box, which you keep locked. The airline folks have to inspect it, after which you lock it and it goes into checked baggage. Okay. Nothing out of the ordinary there. You get to the airport that serves the City That Care Forgot (or if you’re a native, The City That Doesn’t Give a Damn), and you put your gun case on the counter for inspection. So far so good. Then, the gun goes off. Whoopsie!

Guns really don’t just “go off” by themselves for the most part. In fact, other than the colosal FAIL that is the whole Remington 700 thing, I’ve not heard of a gun just going off by itself. Certainly I’ve not heard of an AD during a weapons check at an airport. Ever. Why?, you may ask. Because you’re supposed to bring the gun to the airport unloaded. DUH.

According to nola.com (with a hat tip to the Drudge Report):

Deubler had been trying to check the rifle with an employee at the United Airlines ticket counter when the weapon discharged, Dyess said.

The bullet struck a counter and a piece of the bullet struck the male employee in the leg. He was transported to a local hospital to be treated for non-life threatening injuries, Dyess said.

The Transportation Security Administration said guns are allowed in checked baggage provided they are declared during the ticket counter check-in process, unloaded and in a hard-sided container. The container must be locked.

“We are reviewing the circumstances surrounding this incident,” agency spokesman Jon Allen said.

Ya THINK? Deubler’s lucky that all he’s gotten is a misdemeanor. And I’ll save Ralph the trouble: gun negligence is not usually a misdemeanor – the more you miss, the meaner you get. (Oh, come on…you knew he was gonna say it.)

Had the bullet killed someone, Deubler would likely be facing manslaughter, reckless endangerment, and a slew of other charges. Yes it was an accident, and accidents do happen. But this kind of accident was 100% avoidable, by simply following the rules.

Deubler’s lucky. So’s the airline worker that got pinged by a bullet fragment. But as the TTAG Armed Intelligentsia knows, luck favors the prepared. This guy was prepared to be the Irresponsible Gun Owner of the Day.