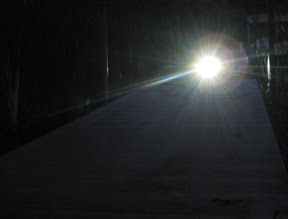 According to heraldonline.com, Bruce Pond of Ossian, Indiana was bothered by the light at the end of a nearby pier (not shown). Despite being drunk and, more importantly, unaware of the source of the light, Pond decided to shoot it. It was a flashlight being used by a neighbor and his dad during some late night fishing. The bullet struck four-year old Jacob Michuda in the head, killing him . . .

Trish Ulmer, a neighbor, described the incident as “just a freak accident.” Ms. Ulmer needs to brush up on her vocabulary; this was not an accident. Had Mr. Pond followed the safety rule know your target and what is beyond, a little boy would still be alive.

Pond was being held without bond on a preliminary charge of reckless homicide and due to appear in court Monday.

Thankfully, the local authorities see Pond’s gross negligence for what it is.