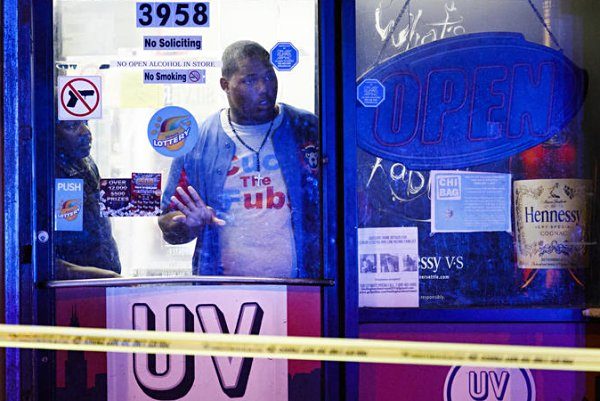 At one point in a wild weekend in Rahm’s Wild West, thirty people fell to (mostly gang-related) gunfire, nine fatally, in the span of 18 hours. Contrast that with 54 percent of American counties that didn’t see so much as a single homicide in 2014.

The Chicago Tribune has the story of Mr. Cooper’s mid-afternoon death. A 58-year-old husband, father and community activist was shot dead Saturday afternoon — less than a block from the anti-violence organization where he worked on the South Side (Ed: pictured above), his family and police said.

Willie Cooper was walking in the 100 block of West 95th Street when a dark-colored vehicle approached and someone inside fired, hitting Cooper in the mouth and torso about 4:15 p.m. Saturday, police and family members said.

He was pronounced dead at 4:28 p.m., there in the Princeton Park neighborhood, according to police.

Cooper’s body lay outside a liquor store, less than a block away from where he worked, at Lilydale Outreach, according to his wife, Sherry Clark. Clark, 44, stood nearby with other family members.

Police found twenty shell casings near his body — a big clue that someone (or someones) wanted him dead. And that his killer(s) had terrible marksmanship skills; he was hit twice.

Mr. Cooper’s death will likely remain unsolved; 84.3 percent of other homicides in the Windy City never generate an arrest, never mind a conviction.

Homicides this past week spiked 50 percent higher than the previous week.  At the same time, the total number of perforated persons fell slightly. Proving once more that shot placement trumps caliber size.

All the while, Chicago’s gang violence problems continue to grow. Just last week, Cook County announced the layoff of 17 of its prosecutors. That’s right:  the Democrats in charge decided to slash the number of prosecutors as violence spirals out of control.

The Cook County Public Defender’s office was ordered to slash 63 of 430 public defenders as well. What could possibly go wrong? I mean, that hasn’t gone wrong already?