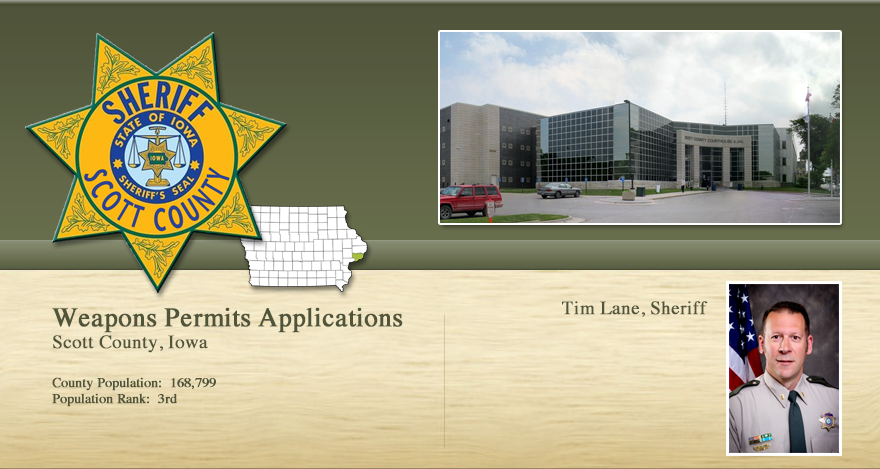 Starting on 5 February, 2014, the Scott County, Iowa Sheriff’s Department has instituted an innovative and convenient way for Iowa residents to obtain their concealed carry or pistol purchase permits. Under Iowa law, a person must have a permit to carry a firearm, either openly or concealed.  They are also required to obtain a permit to purchase a handgun, either from a dealer or privately. While these requirements are a little unusual (most states don’t require a permit to carry firearms openly, and only a few require a permit to purchase one) the online process seems much more convenient than most, and, compared to most concealed carry permits, is reasonably priced . . .

An Iowa permit to carry costs $54 and is good for five years. It also doubles as a permit to purchase pistols during that same five year period. In addition, the carry permit is renewable for additional five year periods for $29 more. The permit to purchase (presumable for home and range use) costs $14, and is good for one year. Of those fees, $4 is a service fee for using a credit card, and can be avoided by paying cash in person at the Sheriff’s office.

No information about the pistols acquired is required by the Sheriff’s office. Unfortunately, you have to pick up your permit at the Sheriff’s office in person, and only between the hours of 8:30 am and 4:00  pm, Monday through Friday. You also have to present identification at the time of pickup, and show documentation of the required training for the carry permit.

My attention was drawn to this innovative program by a short article on kljb.com, titled “Online Gun Registration In Scott County”.  As Iowa doesn’t have or require gun registration, I was intrigued, only to find the program to acquire permits to carry or purchase handguns and nothing to do with registration.

Overall, I have to give the Scott County Sheriff’s Department good marks for their efforts to make the permit process easier for everyone. This online system is still new, and will likely be refined in time.