I’ve been shooting Henry Repeating Arms’ lever guns for decades. I always thought the Silver Series Henry was the all-American gunmaker’s best looking rifle. And it was — until I saw the new all-steel Color Case Hardened Edition in .45-70 Government. The gleaming black of the barrel, the dark brown of the walnut stock and the flowing clouds of dark color of the case hardened receiver combine perfectly. In essence, case hardening is created by adding carbon to the outside of relatively soft iron and steel. It’s a manufacturing process that’s been used for hundreds of years to make a metal with a hard outside surface while maintaining a tough inner core.

It’s a simple process. But as someone who’s done it, the devil is very much in the details. Done well you get, well, you get what we have here. Henry’s taken a good-looking gun and dialed it up to 11. While case hardening is beautiful, it’s not a finish. It still needs to be polished. Henry’s done just that on the Color Case Hardened Edition’s receiver and an outstanding job on the rest of the gun as well. The bluing and polishing is far better than I see on most production guns. Although not a true mirror finish, I can certainly see my reflection in the black-blued barrel. That level of shine carries on throughout the gun, including the lever itself. The rifle also sports little touches of style, easily overlooked, like the case hardened end cap. The walnut stock is of very good quality, straight grained and checkered. This particular example has no burl or quilt to it, but it really looks good next to the receiver and the black barrel. The Color Case Hardened Edition lever gun comes in two calibers: .30-30 and .45-70 Government. The .30-30 has a straight wrist stock while the .45-70 comes with a pistol grip style stock. Both are fashioned from American walnut with perfectly realized checkering for a positive grip. Weighing-in at just over eight pounds, with a shape that puts a large amount of the stock at the shoulder, recoil doesn’t feel particularly stout. Well, not until you step up to the heaviest .45-70 loads. Then the thick rubber butt pad is a genuine blessing — although I dream of equipping the Color Case Hardened Edition rifle with a matching steel butt plate.

This Henry sports a 22-inch polished blued black octagonal barrel. Although I appreciate the ease of movement of a shorter barrel, I much prefer a 20-inch or longer barrel on a gun that will be shot with open sights, especially one chambered in .45-70. This is one of those rare instances where a few more inches really does mean something.

Specifically, roughly 20 FPS increased velocity per extra inch of barrel length. Do the math. The extra 100 FPS compared to a 16-inch guide gun yields just over an additional 100 ft/lbs of energy from 100-300 yards, as well as an extra inch of elevation and windage adjustment for each of those football fields.

Of course, the real gain is the Color Case Hardened Edition’s longer sight radius. The longer the distance between those two sights gets, the more precise your aim becomes. I for one need every advantage I can get. Bonus! The 22″ barrel is also noticeably quieter than the 16″ and 18″ versions.

The Case Hardened Henry boasts the same dependable action as all other Henrys. This is an all American-made gun, born in Henry’s Rice Lake, Wisconsin factory. I’m not sure if it’s the factory, the model or the finish, but some Henry’s cycle better than others. While it’s rare for me to find one that doesn’t cycle well, some Henrys stand apart. This is one of the better ones. There are no catches or stutters in the cycling process.

I’ve been shooting Marlins and my Winchester 94 a bit lately. I’d forgotten how nice it is not to have to intentionally squeeze the action at the top to make sure the action cycles fully. A quick tug down and the Color Case Hardened Edition’s action springs open. Any pull back sends the round into the chamber; the action almost closes all on its own. It really speeds up the shooting. With the .45-70, that means you have the joy of spending your ammo budget PDQ. The Color Case Hardened Edition Henry is a hunting rifle — not just a brush, plains or blind rifle. There’s no cross bolt safety and no half cock. There doesn’t need for them. With the time-proven patented transfer bar, the big bore Henry will only fire if the hammer is fully cocked and someone pulls the trigger. You can safely carry the Color Case Hardened Edition on a loaded chamber with the hammer down while you stalk. This rifle is topped by the same sights I’ve reviewed in several other Henrys. The All Steel models seem to come in two flavors: one with a wide front brass bead and one with a small front brass bead. This is the small bead, the one I prefer. Tucked into the semi-buckhorn ramp adjustable rear sight is a bright white diamond insert.

That insert sells these sights. There’s a teeny tiny notch right above it in the rear site; the brass front bead sits right inside it. Put the diamond insert under the bead and the bead under the target. When they all line up you’re ready to pull the trigger.

This set-up affords precise firing at long distances, and you can use the wider ears of the rear sight for fast shots up close, say on pigs running in the brush. The front sight shines up nicely with a bit of metal polish, and really pops out in any light.

My only disappointment with the Color Case Hardened Edition lever gun: the receiver’s interior isn’t polished smooth to match the exterior. In fact, the chattering tool marks on the interior of the receiver (where the bolt slides past) are large enough to catch on a dry cleaning patch.

I haven’t seen that on other Henry rifles, and it’s out of place here. It’s possible that the normal polishing done to the interior of the receiver after case hardening simply wasn’t aggressive enough for the [now] harder steel. At just over five pounds, the Color Case Hardened Edition’s trigger pull is a little heavy. As with all the modern Henry rifle’s I’ve shot, trigger feel is excellent. If I pay close attention during slow fire, I can detect the slightest bit of creep just before the wall of tension and trigger break. But man, I have to really pay attention.

The website says the lever gun has a four-round tubular magazine. I had no problem loading five, as I have with other long-barreled Henrys. The tubular magazine system — basically a brass tube within a steel tube — is fragile. With the brass tube fully extended or removed, rough handling could bend or dent it. If you did so during a hunt you could still load the receiver directly. (I recommend buying a spare from the Henry website.)

A lot of gun buyers prefer a lever gun with a side loading gate. Not me. First and foremost, the tubular magazine is safer. The rifle doesn’t go in the hammer back “fire” mode over and over again as you cycle the action. And while it’s unlikely that your hand will slip and hit the trigger, with gloves on or cold hands, it could happen. With a side loading gate lever gun, the firearm would go bang.

Not so the Henry. Just leave the hammer down and dump the rounds. For an extra level of protection you can leave the action open while you do it.

On a rifle with a loading gate, if you load five rounds and don’t shoot them all – which is usually how it goes when you’re hunting – you end up ejecting rounds into the dirt, grass, mud or Saint Anthony help you, snow. With the tubular magazine, you pour out your unused round in one safe spot.

In an emergency — you’ve expended all your rounds and you still need to load another quickly — you simply open the action, insert a round into the breach and close the action– just like you would for a pump action shotgun.

Yes, your fingers are close to the muzzle when you load and unload. Leave the Color Case Hardened Edition’s hammer down when you do so. It isn’t going to magically cock itself, and that trigger doesn’t fire unless prodded. There’s a solid firing pin block; the weapon can’t go bang with the action open.

I put 160 rounds through this Color Case Hardened Edition, 60 of which were my own reloads. I shot my own Flat Tipped Round Nosed hand loads and various commercial loads from Hornady and Winchester. I cycled the rifle slowly and quickly. I shot it rapid fire for 40 rounds, as fast as I could load and fire, until the barrel was scalding hot to the touch. (Ask me how I know.) I had no issues with the rifle’s function in any situation with any ammunition. 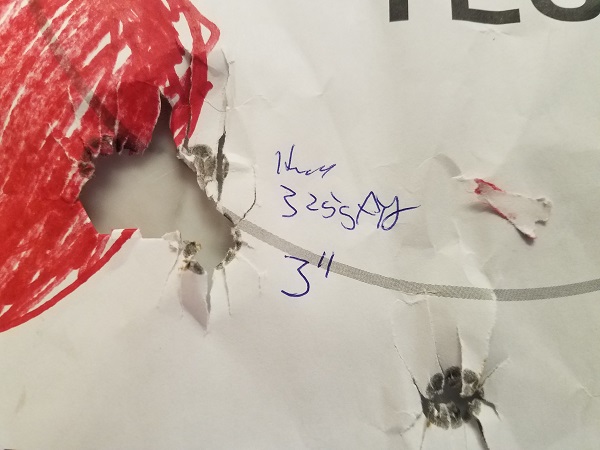 The Hornady 325gr FTX LeveRevolution round was the top performing round. I shot an entire box, 20 rounds, in 4 five round groups for an average group size of 3″. We’re talking five round groups shot open sight off of a rest at 100 yards.

The mildest recoiling round, the Hornady 250gr Monoflex, scored slightly worse, at 3 3/4″. The round I can find anywhere in Texas — the Winchester 300gr JHP — split the difference between the two at 3 1/2″, although that was only for two 5 round groups. Several of my three-round groups would have hit the 1 1/2″ mark.

That group size has more to do with my old eyes than the rifle. As the Henry shoots that well with open sights at 100 yards I’d expect magnified optics to cut those groups in half. It’d be a shame to befoul the lines of this gorgeous gun with glass, but the terminal effect might be well worth it.

Fitted with even a low magnification scope the Color Case Hardened Edition is a 300-yard deer, antelope and pig killer. As is, right out of the box, it’s ready to take game out to 200-yards. And I do I mean right out of the box. The rifle was perfectly zeroed with the 300gr round from the moment I unwrapped it from the wax paper. I was shooting three to four inch circles around the bull’s-eye with no sight adjustment whatsoever.

Henry went back in time with the Color Case Hardened Edition lever gun. Looking forward, this gorgeous, accurate rifle made me glad that the Last Rifle I’ll Ever Need hasn’t been completed. I’m buying this Henry and doing all my hunting with it this fall and winter. That’s as strong an endorsement as I can make. Style and Appearance * * * * *
I would normally take off at least half a star for less than stellar wood, but the gun’s overall fit and finish is excellent. The case hardening is perfectly achieved, protecting the five star rating.

Reliability * * * * *
Slow or fast, cold or blistering hot, the rifle cycled everything I put through it, and did it smoothly.

Customization * *
Sling it, or swap out the included swivel studs for a more traditional style. You can’t change much. Nor should you.

Accuracy * * * * 1/2
I can’t give it five stars because it didn’t break the 3-inch mark at 100 yards with open sights. But it did get right there. A pet load would almost certainly get below that 3-inch standard and any glass would cut those groups down significantly. With a scope, this is Thor’s Hammer to deer out to 300 yards. Without glass, I’d take a moose at 200 yards without concern.

Overall * * * * 1/2
Only one thing kept this gun from the five star mark: the unpolished interior receiver. Otherwise, the Color Case Hardened Edition Henry is absolutely gorgeous. Even better, that beauty is a lucky happenstance of a great performing rifle, capable of taking any animal that walks the Earth.