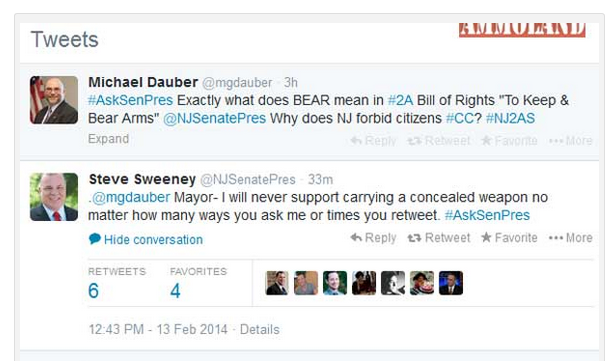 Over at Ammoland.com, our man Fredy Riehl writes:

As some would claim, NJ has a law on the books allowing Concealed Carry, but the facts are that it is conditioned on something called “Justifiable Need”  an impossible standard that concealed carry applicants must meet when applying for their “permit to posses”.  And for this reason NJ judges rarely approve concealed carry documents, and if they do they only go to those that are well connected to politicians in the state.

Sweeney’s statement demonstrates the complete lack of support for correcting this ill conceived and unconstitutional law as well as complete lack of understanding of the recent SCOTUS court rulings supporting the right to keep and bear arms outside the home.

As @Tony_Rock01 points out “don’t worry mr president u don’t have to support Nj will be dragged kicking & screaming by SCOTUS!!”

Much to the Senate Presidents dismay this looks to be true as there are several cases winding their way through the courts that seem poised to force our elected representatives to sort out this legal swamp of gun laws that is New Jersey.

Lawyer Evan Nappen has an interesting case going before the New Jersey Supreme Court that takes on the unobtainium that is “Justifiable Need” and the court documents for this case are well worth the read. Just a short excerpt sums up the problem well:

The United States Constitution does not contain a Bill of Needs. It contains a Bill of Rights. No “need,” justifiable or otherwise, should ever be required for an individual to exercise the rights guaranteed by that document.

The average private [NJ] citizen who wishes to possess a handgun in his or her home, whether for protection, target practice, hunting, collecting or any other legitimate purpose, can not meet such an absurdly burdensome need requirement. It is a defacto ban.

The justifiable need a requirement has to be struck as unconstitutional, and average citizens must to be granted  permits to possess.  Otherwise, New Jersey’s handgun possession law, N.J.S. 2C:39-5b, is itself unconstitutional because it converts a right into an exemption.  Rights may have exemptions, but rights themselves must not merely be exemptions.

Thank you Mr. Sweeney for making clear where you stand on our Second Amendment rights, I am sure you will throw up another wall of legislative BS when the courts force you and your cronies in Trenton to recognize a God-given right.