I am a huge fan of curio and relic firearms, words like cosmoline and Bakelite get me more excited than they probably should.  Now, don’t get me wrong, I’d love to own the un-used Black Widow P08 that your cousin’s uncle’s half-brother pulled off an SS officer during Operation Market Garden, but I don’t have $15,000 right now. Not only that, I’m here to shoot. Holster wear, awkward actions, obscure designs, and a cornucopia of calibers just adds to the fun.

But beyond the mechanics of a firearm and the actual shooting, I enjoy the connection I feel to our collective past. Every time I shoot a 70-year-old firearm, I’m reminded of the often innovative, sometimes tragic, and always humbling path we took to get here.

Today, we are heading to post-WWI Great Britain. So throw on your time-traveling khakis, grab some fish and chips, and pour yourself a pint. My writing companion today is a Scotch Ale by Stone Corral Brewery out of Richmond, VT.  This one is easy to drink, packs a big malt punch, a little smokiness, and is a bit sweeter than I was expecting. (Please note: I have no affiliation with any brewery, but rather an affinity and appreciation for the hoppy and malty offerings that Vermont provides.) 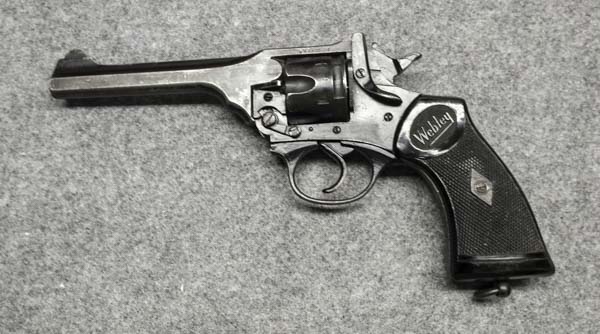 After the First World War, Europe was scarred and shaken. While the Bolsheviks were causing some trouble on the Eastern part of the continent, the British brass were evaluation their situation. The Enfield No 1 Mk III was getting an upgrade, and they also felt that something had to be done with their standard issue sidearm, the Webley Mk VI in .455.

World War I forced Britain to rely heavily on conscripted troops who had limited training. They believed that such troops were ill-equipped to handle the .455, so they changed up the cartridge. They went from a .455 caliber lead bullet weighing in at 265 gr. to a modified .38 S&W round. The new round featured a .38 caliber lead bullet totaling 200 gr. (thus the classification of .38/200 or 380/200).

Smaller bullet plus same velocity (we’re talking in the 600-700fps range) plus smaller gun equals OK for conscripted troops. Made sense at the time…I suppose. Eventually the bullet was jacketed and reduced to around 180 gr. or so (the rules set at the Hague Convention didn’t like soft lead bullets that expanded and stayed lodged in the enemy combatant).

Who better to design such a novel firearm than the blokes at Webley and Scott? I’m pretty sure the design and acceptance phase went something like this:

Webley: Hey guys, here’s the new revolver in the .38 caliber cartridge. Pretty sweet, right? It’s just like our Mk VI in .455, only smaller!

British Brass: Jolly good! We’ll test it out right away! Psst! Hey Enfield, can you make this exact same revolver only slightly different?

Enfield:  Sure! Here it is: The Enfield No 2 Mk 1. It’s different-ish enough from Webley’s design. (Officially adopted in 1932. Cool history on this revolver too…a story for another time perhaps.)

British Brass: Hey Webley, Enfield did this totally on their own without copying anyone. Terribly sorry, but we’re giving the contract to produce the military small arms to them.

British Brass: -sigh- Good afternoon Webley, it’s us….do you think you guys could start making some of those .38 caliber revolvers?

Webley:  Yup. That’s kind of what we wanted to do from the beginning. Anyway, since we’re going to rush things a bit, we’re going to stamp “War Finish” on the left side of the revolver, just so people know this isn’t our normal, exquisite work. (They would go on to produce approximately 500,000 between 1932 and 1978.  Pre-war production was for police.)

British Brass: Great! We’re going to put a ton of markings on there too! Like “tonnes” and crowns and stuff.

Ever since I saw Indiana Jones break open his revolver in ‘The Last Crusade’ I have been itching to try one. (Why was he carrying around a giant unloaded revolver?)

The operation of the Webley is quite simple. Put your thumb on the latch, and push: Congratulations! Your revolver has been folded in half! Now drop in six cartridges (.38 S&W please), hold the grip with one hand and the barrel with the other, and fold it back together. After you have punched some holes in paper, some more fun awaits. Remember that latch? Push is again to make all of your brass cases pop out of the cylinder (it’s really pretty satisfying). 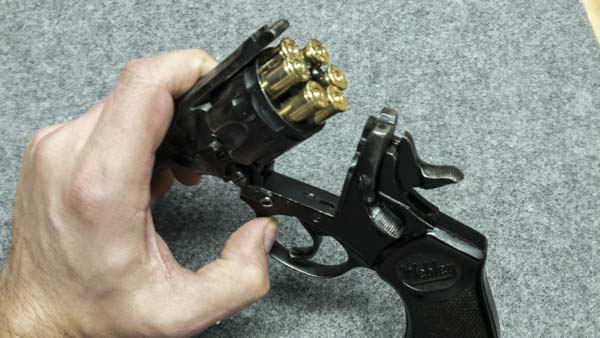 Commercial .38S&W ammo is readily available online.  My local gun shop currently has one choice:  a brass-cased, 145gr LRN bullet from Prvi Partizan. I have been quite happy with this, though I plan to run some other brands through it as soon as possible. I’m also saving all my brass for the time I jump into reloading (really close to taking this leap).

I should, however, find another gun chambered in .38 S&W so I can justify a bulk ammo purchase. Or maybe I make the bulk ammo purchase first and use that to justify a new gun…decisions. A quick brass comparison of the .38 S&W with others (from left to right: 9×19, .38 S&W, .38 Special, and .45 ACP): What are the other features you ask? This is a double action revolver, so you can either load it up and start shooting, or pull back the hammer and take some more measured shots. Trigger pull in single action is great (unfortunately I do not have a gauge…it’s on the long list of “stuff other than guns and ammo that would be neat to have”). In double action — I’m not going to lie — it’s approaching Nagant Revolver territory. Not quite there, but damn close. If you shoot more than a box in double action, you might want to think about icing your index finger.

The sights work, plain and simple. The rear sight is a notch, and at the end of the four-inch barrel there is a post. With this gun, you really don’t need anything else, it has proved accurate and consistent over around 250 rounds. The cylinder of the Webley has a little more play than your standard revolver (thanks to the break-open nature of the gun). This does lock up nicely once the hammer is cocked.

This gun is not light. It’s made out of steel and stout-fueled English sweat (ew). Weighing in at 2.4 lbs. unloaded and 10.25 inches, there is minimal recoil. This allows for faster follow-up shots, and a really fun range experience.

Alright, I have to be totally honest. The below target is not mine. It’s my father’s. I’d love to blame the humidity, the wind, or the dude next to me with the un-lit cigarette in his mouth for about 20 minutes, but I can’t. My old man outshot me (three in single action, three in double action): I can, however, say that my less defined group was also low (all of this is measured at seven yards). This makes sense considering the 145 gr. ammo is about 55 gr. lighter than the ammo that this revolver was designed to fire. While my group wasn’t fantastic, I did have great success cleaning up bits of orange clays on the berm behind the target.

It’s a 70+-year-old revolver that points great, barely recoils, has been 100% reliable, and hits what I’m aiming at (if I do my part): What’s not to love?

I’m glad you asked. Thanks to the Internet, you can find a variety of replacement parts and reproduction grips. You can even find a canvas holster. But seriously, this is where the gun shines: The Webley Mk IV .38 has a lanyard ring. This means anything that can have a hook attached to it can be an accessory on your Webley: I was going to attach a My Little Pony, but I didn’t want to face the repercussions associated with putting a hook through Rainbow Dash or Twilight Sparkle.

The Webley Mk IV .38 is an accurate and enjoyable revolver. While it’s finish may be worn down, it’s soaked in history. You don’t buy this gun for competition or for self-defense, you buy it to feel closer to our collective past and to have a great range day with your dad.

Be careful when looking to buy one of these. Many retailers/sellers confuse this Webley and the Enfield of the same caliber. The easiest way to spot an Enfield is the different grips (assuming they still have factory grips and not some horrifying homemade wooden set that was painstakingly carved while have-in-the-bag in a garage with a dull knife in the dark).

If you see a bobbed hammer, you’re likely looking at an Enfield No 1 Mk 2* or Mk ** (the stars are important, just ask Google). Become familiar with the various markings on both the Webley and the Enfield and you’ll be able to easily spot the mislabeled listings on Gunbroker and incorrect tags at your LGS. Do your homework, be patient, and pick up a great example of each.

Accuracy: * * * *
Pretty darn good. Shoots a little low, but this may be corrected with different commercial loads or maybe some handloads that better meet the original specifications of the .38/200 ammo.

Ergonomics: * * *
Feels great in the hand, points naturally, and has minimal recoil. Nothing fancy, it just works. Double action trigger is a bear.

Overall: * * * *
A great range companion that, after a bit of searching, can be had a decent price. If it’s got history, but it sucks to shoot, it has to be really, really cheap for me to be interested. But this Webley not only made it through the Second World War, it’s also fun at the range.