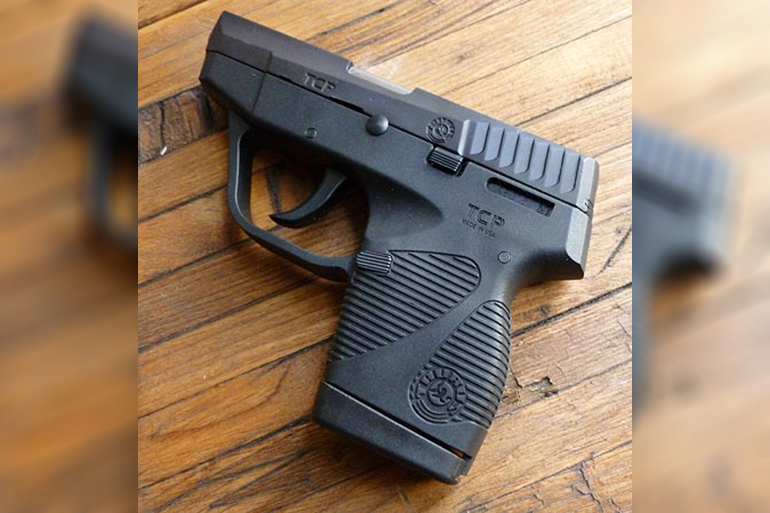 You know what it means when summer’s coming. Shorts. T-shirts. Lighter clothes. And concealment issues. The time of year when even the most ardent caliber warriors make compromises. If you’re in the market for something smaller and lighter than your usual 1911 carry piece, you need to check out the Taurus PT 738 TCP. No, it’s not the first .380 ultra-compact that comes to mind. But despite being on the very bottom end of the MSRP scale of pocket .380 mouse guns – with a price ranging from $199 to $249 – it’s at the top end of the scale for reliability and quality. A Taurus? Yes, a Taurus . . .

My local range rents basically all of the .380 micro compact pistols on the market – Kahr, Diamondback, S&W, Kel-Tec, SIG, Ruger, AMT, Magnum Research, Colt, etc., etc. They’re popular rentals and popular sellers. Some of them have been trashed and replaced with new ones due to extreme wear and breakages. One had gone back to the factory a dozen times for repairs and had also been fixed in-house at least as many times before they just trashed it. In fact, they’re on their third example of that same gun and the same parts continue to break every thousand rounds or so (and weird parts, like the trigger return spring). I’m telling you this because they tell me the TCP is the most reliable pocket .380 in their rental case. Their renter has over 10,000 rounds through it with no breakages. None of the other contenders can claim that. The SIG P238 is, however, a close runner up (one in-house repair). The Ruger LCP, known as a stout little gun, comes in third (with a warranty trip or two). But the others don’t seem to like high round counts and rental-type abuse.

Obviously that kind of feedback is great and it bodes well for the little pistol. That said, I wasn’t actually in the market for another carry gun, and I had basically chosen never to carry a gun in a caliber smaller than 9×19. After all, I can comfortably and properly conceal my Beretta Nano under just a light t-shirt and have been doing so almost every day for the past year. So why go .380? I didn’t. Well, not to carry. Not on purpose. I bought the TCP just to do some .380 ACP ammo testing. However, the day after I brought it home I went out on a long bike ride with some family on a hot day. The Nano wasn’t going to work IWB under any shirt I wanted to wear — not hunched over the handlebars. While it would fit in the front pocket of the shorts I was going to wear, it wouldn’t be comfortable after 40 miles on a bike. And carrying it off my person isn’t something I’m interested in.

So…the TCP went in a Sticky Holster and into my front pocket (Yes, untested. You can yell at me about that later.) and, I’ll be darned, it was like it wasn’t there. Just 10.2 ounces of gun weight plus a few .380 rounds is nothing. And its scant 0.87” width and 3.75” height (with magazine) fits in just about any pocket with room to spare. I have since carried it all day long about six times. IWB, in a front pocket, or in a cargo pocket; it definitely gets an A+ for concealability and ease of carry. 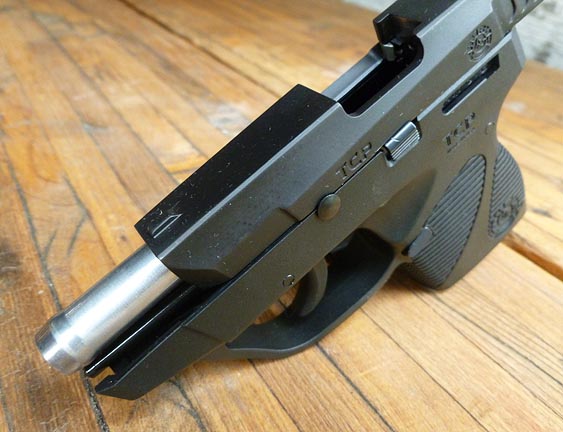 Three main things clinched the Taurus over its competitors as my tiny .380 of choice: price, a slide lock, and an excellent trigger. Most pistols in this category don’t lock back after the last round is fired, and some that do still don’t have a manual slide lock. Check and check for the Taurus.

Most pistols in this category have extremely heavy, often gritty, stagey triggers. The PT 738 has an absolutely amazingly smooth trigger, measuring just a hair over four pounds on my example. The pull is long, but it’s super smooth with only a little bit of pre-travel and a nice, tactile and audible reset. Taurus says the gun is double-action only, however the slide must reciprocate in order to reset the trigger. I really cannot emphasize enough how smooth and consistent this trigger is. For a $200, polymer, micro-compact gun it’s just ridiculously good and I would not change a darn thing about it. Also of note: the pistol is hammer fired. The hammer is hidden from fingers, but visible in the frame under a channel in the slide. The pistol has a loaded chamber indicator – a small blade that sticks out of the right side above the extractor – and the Taurus Security System, which allows the gun to be rendered inoperable by turning a security bolt with a special tool. No thumb safety or trigger safety.

Fit and finish is every bit as good as the competitors’ offerings. One detail that might help with the TCP’s reliability (and likely with accuracy as well) is its near-full-length metal guide rails rather than small inserts as you might expect. 50 rounds of Blazer Aluminum, 50 rounds of Blazer Brass, and 4 rounds of Buffalo Bore .380 +P loaded with the Barnes TAC-XP 80 grain bullets later, I can report 100% reliability in every way (November, 2013 edit & update. Over 300 rounds through my example without a single stoppage). Despite extremely small sights, which are machined into the slide and therefore not adjustable, I was more than sufficiently accurate with the TCP especially at the distances the gun is intended for. The front sight will certainly be getting a dab of white paint to make it more visible, though, as I chalk up most of my misses to not seeing it properly.

Recoil is, as you’d expect, a bit on the stout side. Even a .380 cartridge can push a 10.2 ounce gun around and a lack of surface area on the grip doesn’t help. Because it’s as svelte as Alessandra Ambrosio at the beach, your hand doesn’t really contact the side of the grip under your palm very much – mostly just the front and back. In the first couple dozen rounds, I found the gun was actually rotating in my hands from the recoil. A little tweak of my grip – squeezing harder with my support hand – fixed that right up. All this said, because the TCP is a locked breech design and not a straight blowback pistol, recoil is much more comfortable than many other small .380’s that you might also consider. I found it more comfortable and controllable than I anticipated.

Possibly my only nitpick on the gun is the corners of the slide lock are sharp, and that’s right where my thumb wanted to be. This was kind of ‘pokey’ during recoil and it was fixed by lowering my strong hand thumb right into the oh-so-convenient thumb relief that’s molded into the frame. Who would have guessed?

With a street price of about $225 for this base model, high quality extra mags available for about $24, good looks, ease of carry, nice features like a slide lock and great trigger, a lifetime warranty and build quality capable of exceeding 10,000 rounds without a failure, I definitely think that Taurus has a winner on its hands here. Oh, did I mention it’s actually made in the U.S.A.?

Accuracy: * * * *
Micro sights don’t help, but the gun shoots straight. It was better than minute-of-bad-guy rapid firing off-hand at 12 yards.

Ergonomics: * * *
A pinky extension would help with control, but the gun feels comfortable in the hand and is easy to manipulate. The thin grip (which is also a selling point) and the sharp slide lock knock it down a star.

Customize This: * *
Pinky extensions for the mags, grip tape for the frame, at least one laser, quite a few holster options…that may be it. Certainly no new sights.