I have a love-hate relationship with 1911s. On one hand, what’s not to love? Even the least well-made 1911s offer superb ergonomics, a crisp trigger and low-recoil, enabling deadly accuracy. The best of the breed have the same “if it looks right it is right” aesthetic you find in an Alden yacht or a McDonnel Douglas DC-3. Holding a 1911 puts you in direct, physical contact with John Moses Browning’s genius; connecting you to more than a hundred years of combat and personal defense. On the other hand . . .

1911s are heavy. The trigger’s too light for self-defense (where you’re highly likely to subconsciously “register” the trigger). They’ve got an external safety (which adds complexity to presentation). They offer limited capacity. And they’re not as reliable as a modern polymer pistol. All of which makes 1911s sub-optimal carry guns best reserved for experts and target shooters. That said, I’d carry the Solid Concept 1911 DMLS (Direct Metal Laser Sintering) in a New York minute, if only because of the way it was made. Austin’s Solid Concepts fashioned the firearm from a digital model using a three-dimensional additive process. Instead of removing bits of metal from metal to create gun parts (the standard production process) SC’s printer adds material in successive layers to build up the parts. The computer-controlled manufacturing technique allows for relatively easy, rapid and inexpensive gun making. In the real world, plastic proves the point (e.g. Cody Wilson’s single shot Liberator). An all-metal 3D printed firearm? Not so much . . . 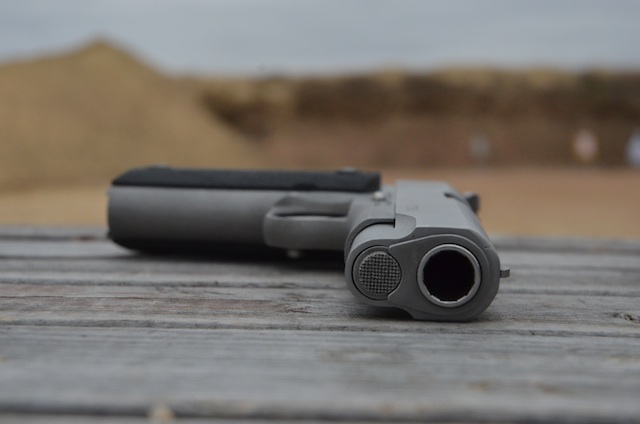 The Solid Concepts 1911 DMLS may cost a bomb—the prototype is priceless—but it signals a sea-change in the way guns are made. The 3D printing process will make metal firearms prototyping and manufacture simpler, faster, cheaper and better. High-quality gun making will become more available to more people more easily. The trend could democratize gun manufacturing, spelling the end of gun control as we know it. Or signal the beginning of ever more draconian anti-gun persecution.

Which brings us back to New York, whose newly enacted seven-round limit on pistols symbolizes government’s desire to rob Americans of their natural, civil and Constitutionally protected right to keep and bear arms. As much as Solid Concepts’ Eric Mutchler seeks to distance his handiwork from political ramifications, the 1911 DMLS is a slap in the face of Empire State statists; a technological warning shot across the bow of gun grabbers everywhere. [Click here for an interview with the gun’s creator.]

The best part of holding the SC 1911 DMLS: it feels completely normal. There’s no indication that it’s anything other than a bog-standard 1911. Like all full-length 1911s, the DMLS feels perfect in the hand. The grip safety moves forward with predictable ease. The magazine (not 3D printed) slips into the mag well without complaint. The slide slides satisfyingly, chambering the first round with chunky satisfaction. The safety snicks off as expected. A gentle trigger squeeze and the DMLS throws lead downrange. Wash, rinse, repeat, done.

Standing a good forty yards from the target on a bone-chilling day at Best of the West, Eric Mutchler was ringing steel like Rob Leatham—if Rob was freezing his ass off in a howling gale. The DMLS prototype’s only mechanical problem: occasional ejector issues. Your humble scribe had more luck (with reliability) and no such luck (hitting a target at rifle distance with a handgun). I blame incipient hypothermia and the DMLS’s tiny if historically faithful GI sights. Sensibly enough I moved [a lot] closer and did some point shooting, hammering a pie plate-sized group into Mr. Transparent Organ’s vitals. Would I bet my life on Solid Concepts’ 3D printed ballistic brainchild? After a bit more finishing, tinkering and smithing, sure, why not? Various shooters have run over 1300 rounds through the 1911 DMLS without the gun exploding once. And Eric Mutchler’s no dope. As a former Navy machinist, he knows lives can depend on fully functional machinery. Eric wouldn’t be running the gun so hard, passing it to new shooters like a Rastaman sharing a joint at a reggae concert, if he didn’t have complete faith in its structural integrity. Besides, the thing’s worth a fortune intact. Eric could stop shooting the gun now, declare victory and cash the check for the company. But he won’t for many more thousands of rounds. And then, when Eric’s satisfied that he’s established proof of concept, the first Solid Concepts 1911 DMLS will fall silent and head for the Smithsonian—should the museum have even a small understanding of firearms history. Or the NRA Museum, whose curator is all about the DMLS. After that, wealthy collectors will get their shot at buying the prototype’s progeny at, say, $20k per gun.

Not that new owners’ homies will “get it.” Shooting the SC 1911, it’s easy to forget you’re firing an enormously important firearm. The 3D printed DMLS looks and feels like a “real” gun. The fact that it’s a 1911 only adds to the sense of intellectual complacency. If the DMLS looked futuristic—like Wilson’s blocky Liberator or Chiappa’s steampunk Rhino—the world’s first 3D printed metal gun would have a more immediate, visceral impact. But make no mistake: the 1911 DMLS is a literal piece of history. And those strange new guns are coming, too. Defrosting in the Merc, one of Solid Concepts’ customers showed me a curious piece of metal. The small disk has six cogged wheels inside a larger, cogged wheel, with interlocking teeth. The device emerged, fully formed, fully functional, from a 3D printer. It illustrates an important point: 3D printing opens up a whole new world of engineering possibilities; the chance to create firearms that will take the art and science of gun making to the next level. All it needs is the next John Moses Browning. Watch this space.

Reliability * * *
Extractor issues caused many a MALF but these things can be fixed in post. And it didn’t blow up once.

Carry * * * *
Slim and sexy and too damn heavy—unless you like that sort of thing.

Overall Rating * * * * *
An enormous historical achievement by a guy who knows and loves guns. We are not worthy. Or are we?