I’ve deployed with an M16 and an M4. When push came to shove, the AR-15 platform got it done. And yet the AR-15 never felt like a real battle rifle. It felt like the closest thing to a battle rifle that the military could get an 18-year-old girl right out of high school to shoulder and shoot. But the AR-10? The AR-10 feels like the real thing . . . The core of the Smith & Wesson M&P10 Sport Optics Ready rifle: the barrel and receiver set.

The barrel is a 16-inch 4140 steel tube with a light weight contour, finished with “all the rage at the rage” 5R rifling. More and more popular rifles are now being mass produced with the cut prefered by many competition shooters; the same land and groove configuration of the US Army M24 sniper weapons system.

The touted benefits of 5R rifling: superior accuracy and longevity, as well as more consistency between long strings. So far, I haven’t been able to identify any significant difference in these mass-produced barrels with the 5R cut, as opposed to more traditional rifling, but time will tell. 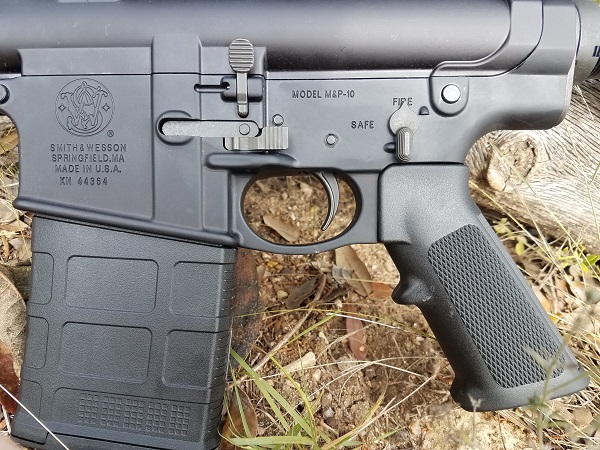 Most shooters will find the M&P10 Sport Optic-Ready rifle’s lower receiver a significant improvement on other manufacturers’ AR-10 offerings at the same price.

The Smith’s dimensions are nothing out of the ordinary, but the completely ambidextrous controls are. Magazine release, bolt catch/release and safety are all mirrored on both the right and left of the rifle. The rifle’s magazine well is textured for a more secure grip if, for some reason, using your support hand on the hand guard just doesn’t work for you.

The upper receiver provides nothing out of the ordinary, with the usual forward assist and a solid rail on top of the gun. I was disappointed with the standard charging handle. It’s small and stiffer than normal. I like a “big boy” latch on an AR-15 and it’s a necessity on an AR-10, where the bolt’s a little harder to get moving backwards.

The M&P10 Sport comes with an old school round hand guard. It’s the kind that came on my issued M16 in basic training. I like that grip now and I always have. It feels good in my hand from standing, the prone or from the kneel.

Of course, there are no rail sections on the rifle and there won’t be. If you want those, you’re going to have to swap out those hand guards — which is easy enough to do. S&W has placed a rail section on top of the gas block on the mid-length gas system. You can mount a front sight to the rifle for either back up irons or, if you want to keep it real, go without glass entirely. These rifles come in standard black, but some finishes are better than others. This is one of the better ones. Armorite is the S&W proprietary nitride finish, and they’ve covered the receiver as well as the barrel inside and out. It looks good with the right amount of deep blackness to it with just a touch of gloss. It’s the classic scary black rifle. I made a lot of empty brass for this review by sending a full 500 rounds down range. About 200 of those were my own reloads, launching a 150gr soft point round at 2,775 fps. That’s more than enough for any deer out past 500 yards. The rest were commercial rounds of multiple weights and varieties. The rifle never had any issues with any of the rounds, save one. The Hornady 125 grain SST Custom Reduced Recoil failed to cycle every time. That’s not surprising; I can’t ding the direct impingement rifle for failing to reliably run such a light load. For every other rounds, including FMJs from Fiocchi, soft points from Federal, and numerous types from Hornady, everything cycled just fine.

The magazines never failed to load or drop, and the bolt never failed to run fully forward into battery when I released the catch on a new magazine. The forward assist was there, but unnecessary. As for accuracy, the M&P10 prints tight groups across a wide range of ammunition. The best-shooting five-round group averaged right at one inch using the Federal Premium 168gr Sierra Match King round from a rest at 100 yards. I’m not surprised as the 168gr SMK has been a standard for decades, and for good reason.

Just behind that were both the Hornady 125grain SST Custom Reduced Recoil load, and the Federal Gold Medal 185 grain Juggernaut round, both printing an average of 1.1 inch for four five round groups. The Federal 150 grain Non Typical round printed the widest five round average, at 1.4 inch.

That accuracy sure isn’t courtesy of the rifle’s “mil-spec” trigger. Because it’s horrible. It’s squishy, with tons of creep. It does break, eventually, somewhere. Of course, it’s an AR, so you can replace it easily, and I’m betting over time most folks will. (This the trigger that has spawned dozens of aftermarket companies.)

Also meant to be replaced: the pistol grip and butt stock. The grip is the standard one-finger notch hollow plastic variety. The stock is the common six position collapsible stock every AR shooter knows, and has come to replace. Out on the range, I was smitten with the rifle. Then again, I’m smitten with just about every AR-10. Heck, the only battle rifle I like more than the AR-10 is the PTR 91. Sure, I’d change the Smith’s furniture and the trigger, at some point. But right now, it shoots very well. It feels good from the shoulder, with the shorter barrel and hand guard making for quick and sure target transitions.

S&W has produced a relatively inexpensive AR-10 that’s made to be modified. It’s finished well with a better than average barrel and a great receiver set. As is, it’s more than good enough to shoot, hunt or protect for about a grand. Not bad at all.

Style and Finish * * * *
It’s standard black rifle, but the black is a better black than most other rifle’s blacks.

Customization * * * * *
It’s an AR-10. No, still not quite as easy to replace everything as an AR-15, but close. By already shipping with an ambi lower receiver, S&W has given the customer upgraded guts, and leaves the simple bolt-on’s to the shooter.

Reliability * * * * 1/2
It cycles almost everything. A lighter load is still in spec, but there’s no way you should expect an AR to cycle everything from 125gr to 180gr loads without an adjustable gas block. Which is exactly what would have given this five stars.

Accuracy * * * *
1MOA and just above with multiple rounds is darn good shooting, but nothing broke the 1” mark.

Overall * * * *
This is three-star furniture with a four-star barrel on a five-star receiver. A great value firearm.