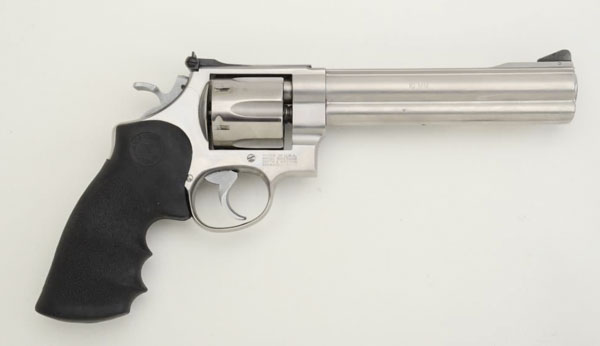 One night while watching my favorite YouTube channel where the video usually starts with a tall, older gentlemen slinging lead in a backyard range, followed by, “Hickok45 here…” a thought ran across my mind: “I wonder if anyone makes a revolver in 10mm?” So I paused the video, typed “10mm revolver” in Google and 0.34 seconds later and I had my answer. It turns out that at one point Smith & Wesson offered Model 610 chambered in the powerful 10mm cartridge that can also shoot .40 S&W.

The Model 610 is a N-frame revolver with full under lug, red ramp front sight and adjustable rear sight. It was first introduced in 1990 with 5-inch and 6.5-inch barrel length, fluted cylinder and hammer mounted firing pin.

The model was discontinued after a few years and re-introduced in 1998 with unfluted cylinder, frame mounted firing pin, and the dreaded internal lock. There were just under 2000 of the 5-inch version and 2700 of the 6.5-inch version made in the first “no dash” production run. Later runs also produced a 4-inch model and the ultra rare 3-inch Lew Horton distributor’s special, where only 300 were made.

People who have shot this gun are impressed by its accuracy, as well as its ability to handle “real” 10mm ammo with it being a N-frame. Knowing the rarity of this firearm, I knew getting my hands on one wasn’t going to be easy. At any given time Gunbroker usually have less than five up for sale.

The one I had my eyes on was a no dash model with aftermarket fiber optic front sight, good looking wooden grips, and no signs of wear. I had a number in mind but it didn’t take long for others to drive the price way past it. Couple hundred dollars later the bidding frenzy seemed to slow down a bit. I figured I should at least place one bid after watching the auction for almost a hour. There were multiple serious bidders and there’s no way they’d lose an auction over twenty five dollars, there’s no way nobody is gonna outbid me. Never in my life have I been more glad to be wrong. Getting a new gun never gets old. Even though this one isn’t brand new, the excitement is just the same. The gun has aftermarket wooden grips, wide target hammer, and a smooth trigger face. The seller also threw in 100 moon clips as he didn’t expect to fetch that high of a price.

With the 10mm and .40 S&W being rimless cartridges, moon clips are required to keep the rounds in place when firing and ejecting the spent cases. The wooden grip is smooth on the back end and checkered around the finger grooves, it’s thicker than the Hogue rubber grips that normally goes on the N-frame revolvers. To my surprise, the gun also had a trigger job.

There are reviews on the internet that reviewed the Model 610 with the stock trigger, which is on par with Smith & Wesson’s other offerings. I have shot Model 686 Pro Series, the iconic Model 29, Dan Wesson 44 Mag, and Colt Python among others, and I can honestly say the trigger on my Model 610 is better than all of them. If a crisp trigger is like breaking a glass rod, pulling the trigger on my 610 would be like breaking a smaller, thinner glass rod.

The double action is slightly heavier than the take up on a Walther PPQ, except it’s that smooth and fast all the way through. As for the single action, the gun will go off in about 3/4 of a second after you put your finger on the trigger and decide to fire. It will surprise anyone who’s shooting it the first time just how little effort it takes to break the shot.

The reputation of the 10mm cartridge is well known, combining that with a 6.5-inch barrel and a superb trigger makes this Model 610 the most accurate handgun I own. The weight of the gun makes the 10mm very manageable to shoot, and completely takes the snappiness out of the .40 S&W. Shooting it standing with factory ammo at 25 yards single action, I was able to get a 1.75-inch 4-shot group. Shooting double action, I ruined an otherwise great five-shot group by pulling one low. These two groups are from my first time shooting this gun. After I started reloading the 10mm, I can hit an one inch square piece of tape at 25 yards at least one in every five shots off hand, single or double action. 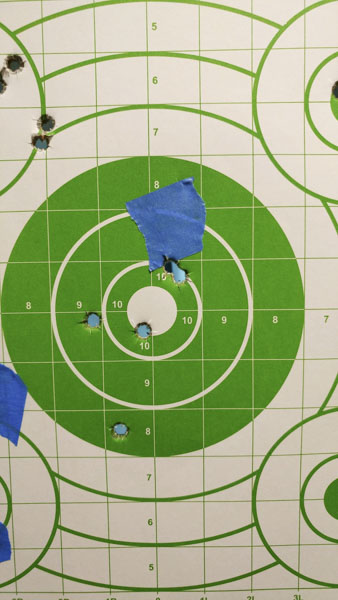 At one point in time Smith & Wesson also offered the 10mm in a snubby, the Model 310 Night Guard in scandium frame. The 10mm is a favorite of many serious shooters, and there seems to be a resurgence of the caliber in recent years. The Model 610 is an accurate, reliable revolver that handles both 10mm and .40 S&W very well. Any discontinued quality revolver with limited production runs will always be valuable, and the caliber makes it very unique. If you ever come across a Model 610, I would seriously consider it.

Ergonomics: * * * *
The gun points naturally, and while the wooden grips doesn’t absorb the recoil as well as the factory Hogue grips, it does fit the hand pretty well.

Reliability: * * * * *
I have had malfunctions with revolvers before, but this is a very solid gun, never had an issue.

Customization: * * *
There are options for the front sight and grip, same as most other production N-frame revolvers.

Overall: * * * *
A platform that can maximize the potential of the 10mm cartridge. With the 10mm being a versatile round in bullet weight and velocity, it won’t have feeding/ejecting/magazine issues as with semi-autos. Great choice for hunting with the 10mm or for competition with the .40 S&W.