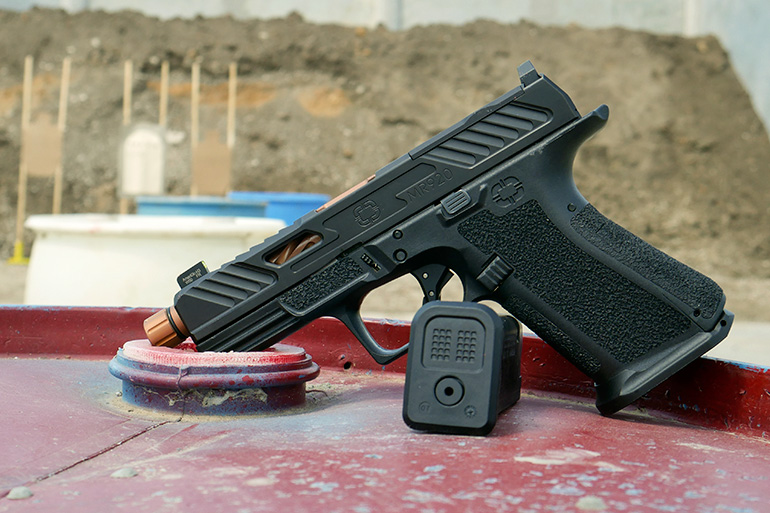 It’s the same story whenever anyone posts a picture of a new GLOCK on the internet. There’s always a race in the comments to suggest getting new sights, an extended slide stop, sticking on decal grips or getting a stipple job, and adding some whiz-bang trigger parts to make the trigger useable.

The OG GLOCKs are a lot more serviceable than they are often given credit for. Maybe that’s why they sell so many millions of them every year. But there’s not much question in my mind that Shadow Systems has elevated the form of the humble polymer service pistol to a level that most aftermarket builds have a hard time reaching.

Introduced at SHOT Show 2020, the Shadow Systems MR920 is the second from-the-ground-up pistol from the Plano, Texas-based gun maker. The MR920’s older brother, the MR918, was released in 2018. Shadow Systems took the feedback they got on their earlier model and have come back with something new.

MR stands for “multi-role” and these pistols are intended for everyday use. The MR920 is aimed at the same use case as the venerated GLOCK 19 with appointments that will make most pistol snobs happy, all while still being compatible with most Gen3 and Gen4 GLOCK parts. That includes holsters.

The most notable feature of the MR920 is the frame. The backstrap system is not a scabbed-on afterthought, but rather it’s built in intentionally. As a result you can change the point of aim on the gun based on which of the three included backstraps you choose to use.

They offer a standard GLOCK-style backstrap replicating the grip angle of a stock GLOCK pistol. Another backstrap offers a more neutral grip angle like an M&P, and the third backstrap actually comes close to mimicking (almost) the 1911 grip angle.

Let that sink in — one of the most widespread complaints of the GLOCK style pistol is the grip angle and for the most part you can make this pistol suit your preference. The small/1911 backstrap provides pretty good access to smallest handed users, while the neutral and GLOCK-style backstraps should be acceptable to all but yeti-pawed shooters. Included with the backstraps is a polymer magazine well system that hooks onto the backstrap which makes the gun amazingly simple to reload rapidly. While the magwell makes the pistol easier to load, it also tends to print more, but it attaches and detaches easily.

There is a corner on the front of the magwell that is a bit sharp and if you don’t wear an undershirt when carrying appendix style, it will likely initially cause some irritation while you get used to it. The rest of the frame is pretty squared away as well, from the fine grippy texture all over the areas where your hand interacts with the frame, to the double undercut under the trigger guard, to the ledge built into the frame to allow those who use their support hand thumbs to fight recoil. It’s clear that plenty of thought went into the design of the frame. The frame has an elongated grip tang or “beaver tail” that keeps your flesh out of the moving bits of the gun – but also helps to help keep the muzzle down on recoil.

And the muzzle does stay down. Shadow Systems boasts of the gun being the “Industry’s flattest shooting pistol.” While I haven’t shot all of the pistols to know definitively, I have shot most of the popular ones. I also have a Mantis X10 Elite which has a recoil meter and using the most exacting form of Bro Science, I can confirm that the MR920 does have less muzzle climb than my GLOCK 34 competition gun. And the MR920 is pretty fun to shoot fast which has a lot to do with the 1200 rounds I’ve put through it before sitting down and writing the review. 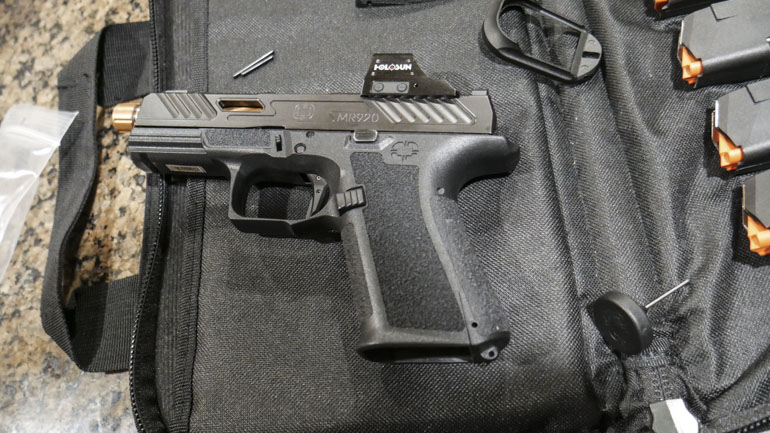 The slide features some pretty snazzy work. This is probably a good point to talk about the two trim models of the MR920. The MR920 comes in a more conservative trim — the “Combat” model — which does not have quite as many slide cuts and no optic mount.

My MR920 is the Elite version with the slide cuts additional serrations and Shadow Systems’ “universal optic mount cut.”

The trigger system is a GLOCK Safe Action based on a Gen3 trigger bar, but uses the popular Taran Tactical connector and an aluminum trigger shoe that has a mostly flat face. The result is a very nice trigger with reduced pre-travel compared to a stock GLOCK trigger.

Out of the box the trigger pull was closer to 5 pounds, but it has settled in over time at about 4-4.5 pounds at the tip with the “soft wall” break typical to GLOCK triggers set up with 3 or 3.5 pound connectors. The trigger doesn’t get in the way if you’re trying to shoot fast or eke out as much precision as you can.

Precision is easy to get from the MR920 as it features the Shadow Systems spiral fluted Match grade barrel. Despite the rumors on the internet, the Gen5 GLOCKs are notably accurate for a service pistol. My example of the MR920 Elite grouped tighter at 25 yards from the rest than did my G19 Gen5. At closer distances off-hand clover leaf groups are a regular occurrence.

The barrels are available in three colors – Bronze TiN, Gold TiN and black nitride. The flutes, while looking cool, also seem to do a good job collecting fouling so that slide velocity stays high. For those of us who don’t like cleaning guns every time we go to the range, this is a nice feature.

With respect to reliability, the RM920 Elite runs about like you’d expect a GLOCK to. The manual suggests a 200-round break-in period and I did have an issue where if I rode the slide home on chambering a round, the gun would hang up out of battery just a bit. A tap on the rear of the slide would send it home.

The issue never presented itself when firing the gun or using the slide stop to put the gun into battery. Sure enough, the issue went away at around the 200-round mark. Of the 1200 rounds shot, I’ve had zero issues with feeding, ejection, or ignition. The RM920 just works. It doesn’t seem to care whether it’s a JHP defensive round, light loaded target round or anything in between.

A common dig against polymer wonder nines is their propensity to use polymer guide rods – the MR920 comes with a single spring captured guide rod. So that’s yet another item on the list that doesn’t need to be changed out. The sights that come standard on the gun are Ameriglo night sights featuring a serrated black rear, and a high vis front with a single tritium lamp. 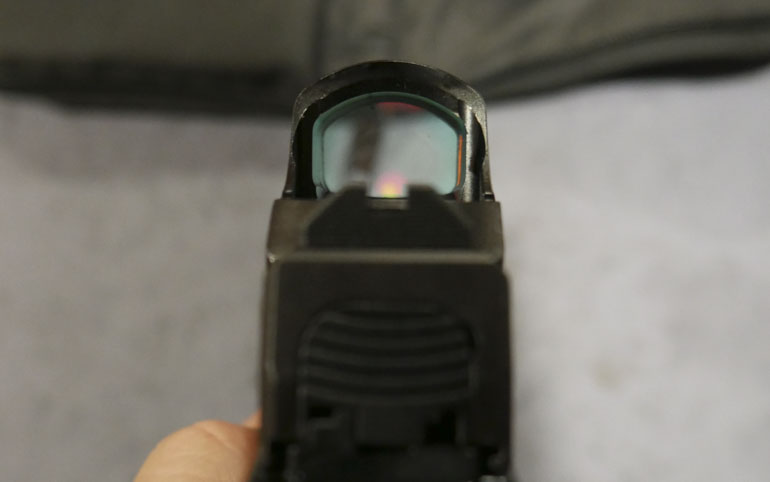 The sights are tall enough to provide lower 1/3rd cowitness with Holosun or the RMR optics and the slope of the rear sight makes the rear sight practically invisible. The “universal” optic cut boasts of being able to accommodate basically any optic you can screw down onto the slide and you’ve got pretty much all of the features of a Gucci GLOCK straight from the factory. The RM920 optic cut bucks the prevailing wisdom on mounting dots. Rather than using recoil bosses, it has a pretty deep cut and it comes with three spacers of varying widths. The spacers wedge the optic into the optic cut and you use a pair of some of the longest heaviest screws to secure the optic down. Included with the gun are three pairs of screws of varying lengths and in the manual suggested pairings with different optics. Long term viability remains to be seen, but initially there has been no loss of zero or functionality with about 90% of the rounds fired with an optic mounted on the gun.

One of the biggest “pros” of a GLOCK-based platform is the aftermarket that’s already there. The MR920 fits GLOCK 19 holsters. Most of your favorite go-fast GLOCK parts will likely already fit in or on this gun. The gun is so well set up from the factory I imagine we’re talking about holsters predominantly, but if you felt the need to swap out any parts, you certainly could. The RM920 comes in a Shadow Systems gun rug which can accommodate five magazines. The MR920 comes with two 15-round Magpul GL-9 magazines. Also in the box is a punch to swap out the backstraps and magwell, some Lucas Extreme Duty Gun Oil, and even Blue Loctite to mount the optic.

Shadow Systems includes basically everything you need to take the gun right out and hit the range. I wish all manufacturers would get on board with the gun rug program instead of the black gun Caboodles that just take up closet space. All in all, the Shadow Systems MR920 is pretty easy to shoot well and is very well thought-out. If you’re the kind of person who likes to buy a new GLOCK, and add new sights, and a grip package, and have slide work done and… and… and.. .then the MR920 is a very strong value. Both MR920 models offer most if not all of the features shooters want at a pretty reasonable price.

Reliability * * * * 1/2
No issues beyond hanging slightly out of battery when riding the slide during the break-in period.

Ergonomics * * * * 1/2
As good as you can make a GLOCK pattern pistol without dramatically altering the profile of the grip. The beavertail and undercut are winners.

Overall * * * *
The Shadow Systems MR920 represents a killer value if you appreciate the features that it offers. Due to price, it sits midway up the diminishing return curve. The enhanced frame really shines when run rapidly. If you can’t shoot fast, the frame won’t be as much of a value to you. But the MR920 is unquestionably an easier, more enjoyable gun to shoot out of the box than a plain-Jane GLOCK 19.