The Ruger Mini-14 is one of Ruger’s flagship rifles. First designed in the late 1960’s as a smaller civilian version of the U.S. Military M-14, the rifle has been used by generations of hunters and target shooters. It’s also been featured prominently in movies and TV shows throughout the years. This rifle was the AR-15 of the 1970’s and 1980’s, the semi-auto firearm of choice — and for good reason. There’s just something quintessentially American about the look of the Mini-14, and now Ruger has released a version in my favorite caliber: 300 AAC Blackout. Is it the awesome “peanut butter in my chocolate” moment that hunters like me have been waiting for? . . .

The Mini-14 looks and feels like someone left an M-14 in the dryer a little too long. All the parts are present and accounted for including the stylized charging handle, just a little reduced in size. The gun functions exactly the same as an M-14 (minus the giggle switch) or an M1 Carbine, but there are some differences in the parts quality as well as minor design changes that differentiate this gun from a reduced photocopy of the military gun. 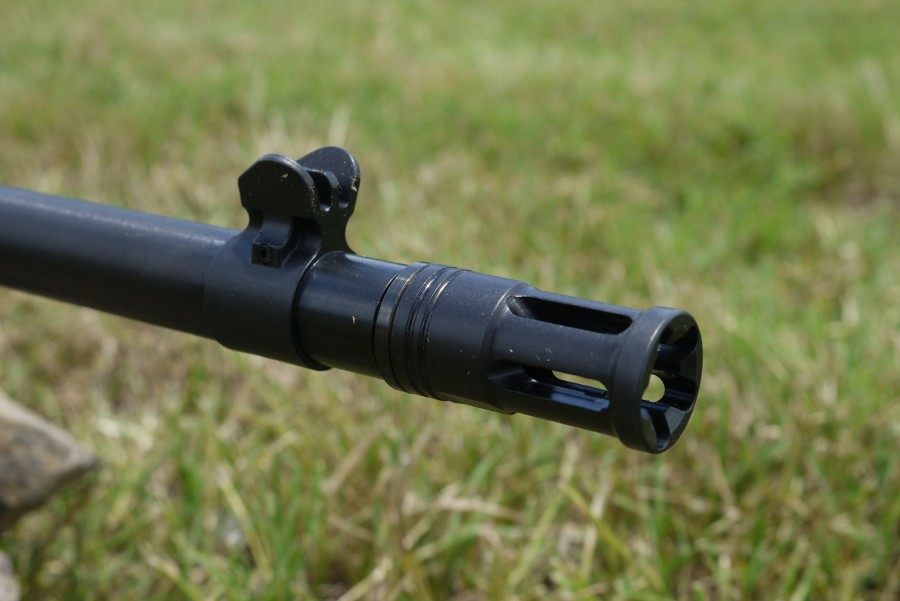 Out front, the muzzle is threaded in a 5/8×24 pitch that is fairly standard for 30 caliber applications. The rifle ships with a flash hider threaded onto the muzzle, but this is easily removed as Ruger has helpfully not slathered it in Loctite before shipment. For those buying the Mini-14 Tactical in 300 BLK I get the feeling that the flash hider is there more as a thread protector than anything else before the end user’s silencer makes an appearance. Right behind the muzzle there’s a fixed front post for the iron sights permanently attached to the barrel (more or less). The receiver is a little bit disappointing. My M1 Garand may have spoiled me, but I’ve gotten used to the solid feel of that well-built action slamming home. With the Mini-14, it feels like the receiver is made of pot metal rather than something substantial. Working the action is like slamming the door on a cheap Kia — it feels hollow and without substance.

Part of the problem might be the stock, since Ruger uses a durable synthetic material for their Tactical line of Mini-14 rifles instead of the thicker wood stocks used on their Ranch Rifle and other guns in the line. That synthetic material is lighter and cheaper, but also thinner.

Ruger ships these guns with iron sights, as well as a proprietary scope mounting system already attached to the receiver. The rifle I received came with a set of matching scope rings, and so I dutifully used them to attach Nikon’s new 300 BLK BDC scope to the gun for testing. But I quickly ran into a major issue: the supplied rings are terrible. Three rounds into a shooting session and the scope was already loose no matter how much Loctite I used. That’s really disappointing, since having a scope on this gun would be pretty cool for hunting. The magazines for this gun are proprietary. The gun is a scaled down M-14 after all, and that includes the AK-style magazine release mechanism. The M1 Carbine had a push-button magazine release way back in WWII, but the later 1950’s era M-14 required the end user to rock the magazine into place using a stud in the forward section of the receiver and a release in the rear to keep the magazine from moving around.

It would be really cool if Ruger had re-engineered the gun to use the much more common AR-15 magazines, but nope. The mags are helpfully marked with “300 AAC BLACKOUT” to ensure that you don’t go slamming the wrong ammo into the wrong gun, but otherwise they are pretty much standard 5.56 Mini-14 magazines. Moving down to the fire controls, they are simply no bueno. The trigger is so creepy that even clowns avoid it. And it stacks so much that it was just hired to run Amazon’s warehouses. Not good at all, and it definitely has an impact on accuracy downrange. Another thing that I don’t like about the fire controls is the trigger guard safety. I love the idea and the implementation in the M1 Garand, but in the Mini-14 the same design feels very cheap and flimsy.

Disassembly is basically identical to the M14, but with a couple extra added bonuses.

So what we have here is the firearms equivalent of a Fiat Panda. But while it may seem like a bit of a let-down looking at the parts alone, once you load it up the gun is a blast to shoot. Out on the range, the gun cycles both supersonic and subsonic 300 BLK ammunition without any issues. I tried it both with and without a silencer (before Tyler killed my can with a baffle strike) and the gun functioned perfectly. The only issue I ran into was the one I already mentioned: the scope rings are awful. The good news is that there are tons of aftermarket options available, including Picatinny rails you can add to the gun that clamp onto the existing scope bases or even aftermarket scope rings. So while the supplied rings are terrible, you should be able to get some good ones and really stretch the gun’s legs.

Shooting the gun is tons of fun. The synthetic stock is designed for iron sights, so if you leave the scope at home, your cheek weld will be fairly solid on the gun. The stock comes with a rubber recoil pad to absorb some of the increased kick of the 300 BLK rounds, and the result is a gun that is downright fun to fire. Especially with a can on the end. Since Eagle Eye Ammunition (our official ammo sponsor) doesn’t yet make 300 AAC Blackout ammunition I had to find a substitute. I tested the gun (using iron sights only, since the scope wasn’t reliable) at 50 yards using some commercially available 300 BLK loads, and the following is the best 5 round group I could muster, Ruger itself puts the accuracy of the Mini-14 at about 2 MoA. Out at 50 yards, with the provided iron sights, the best I could muster was about 5 MoA. There’s not a whole lot to compare this to other guns apples-to-apples since we do most of our testing with scopes, but consider that my usual hobbies include putting 5.56 NATO rounds through a target the size of a silver dollar with an M-16 with iron sights. Standing. Offhand. At 200 yards.

Still, that’s not too shabby considering the intended use. Most people who I’ve talked to about the rifle think that it perfectly fits one very specific niche: truck gun. The rifle is just inexpensive enough that you could conceivably chuck it in the back of your vehicle along with a couple magazines and forget about it — until you needed it to shoot something, that is. The action on the Mini-14 might seem Kia-esque, but the short stroke gas system and chunky operating rod mean you’re getting close to AK-47 levels of reliability. And while the accuracy isn’t stellar, that’s more than enough to get rounds on a deer for food — or a human for self defense.

It’s a cool toy, but compared to the competition it doesn’t really stack up. CMMG offers a 300 BLK rifle for almost the exact same MSRP, but their gun has a keymod handguard, full length Picatinny rail, adjustable stock, and takes standard 30-round magazines. At that point the Mini-14 really doesn’t make sense financially — you get so much more with the CMMG rifle, and the Mini-14 doesn’t really offer any improvements in return.

There’s no doubt that this is an incredibly fun gun to shoot and that it would do well in a pinch, but I’m not sold. I love that Ruger is expanding the 300 AAC BLK cartridge to more guns but this is one case where the end result is still a mediocre firearm. Cheap AR-15 builds have pretty much eliminated the market for older designs, so unless you really really like the look of the gun (which does look sexy) then I suggest going with the CMMG instead.

Accuracy: * *
Its okay. With some good scope rings this would be a shooter, and most people seem to be getting right around 2 MoA with this model so I would expect the same from the 300 BLK version as well. I’ll let it slide on the “1 MoA for $1k” rule of thumb, since retail is well below that mark.

Ergonomics: * * *
The stock is optimized for iron sights, not a scope. So if you want to put a scope on this gun you might need a cheek riser. The synthetic stock is okay, but it isn’t as nice as a wood stock. The trigger is awful.

Customization: *
There are aftermarket scope rings and stocks, but that’s it. The magazines are proprietary, and not enough people own and shoot these guns these days to warrant a truly booming replacement part market.

Overall: * *
There are better guns available on the market for the same amount of money, so that automatically precludes a 3-star rating. That said, the gun is an absolute hoot to shoot.