Most gun people  knows Armscor, better known as Rock Island Armory, produces some amazing 1911’s for the money, with a lifetime warranty. They have some unique offerings with more coming seemingly every year. Not too long ago, Rock Island released the scaled down Baby Rock, a 1911-style handgun chambered in .380 ACP for the concealed carry market. The Baby Rock features a 4140 ordnance steel frame and slide, with a matte black Parkerized finish and, in general, follows the traditional 1911 design. Every part of the gun has been scaled from a full-sized 1911 which makes the pistol very familiar to 1911 shooters. The Baby Rock arrived in a standard Armscor clamshell pistol case. Inside, was pistol itself, two magazines (Metalform), a chamber flag, and owners manual. The trigger on my Baby Rock came in at just under five pounds on my trigger scale. As you’d expect in a 1911, it breaks cleanly with minimal creep or grittiness, so despite the five-pound pull weight, it’s well-suited for concealed carry or self-defense. 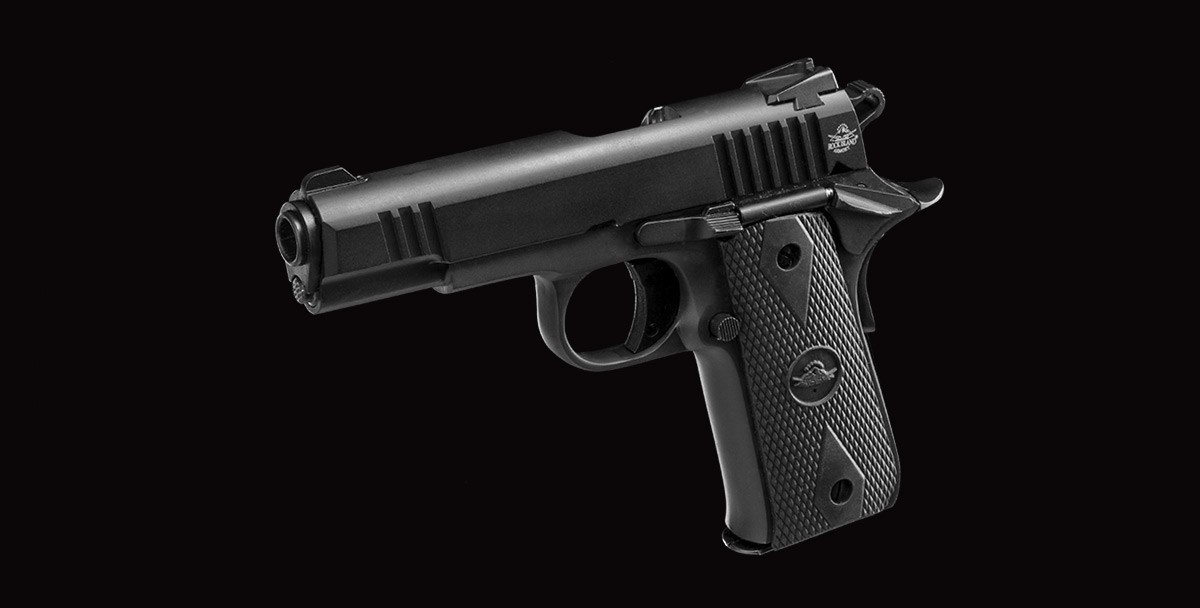 This mini-1911 has Novak-style sights that are actually quite good and allow ample space between front and rear sights for good front sight acquisition. All the traditional familiar components are there, traditional thumb safety, slide stop, barrel bushing, trigger, combat style hammer, grip safety, recoil spring, short guide rod, recoil spring plug and field stripping it works just like a traditional 1911, however unlike a traditional the barrel is fixed and the barrel is not locked to the slide during firing.

The Baby Rock operates on the straight blowback principle. With a fixed barrel, the Baby Rock doesn’t use a barrel link. The underlug of the barrel assembly has a single locating notch through it, which is locked into place in the pistol by the slide stop pin. In addition, unlike a traditional 1911 design, the Baby Rock uses an external extractor.

I was very surprised with the hollow point ammo, since I ran it in the pistol before I’d completed the break-in period, but the Baby Rock ate every round I fed it. With a longer slide that the shorter competition (think Colt Mustang, SIG P238 and Kimber Micro), along with its heavier weight, the Baby Rock has excellent balance and recovers very quickly under recoil. That produces excellent double-taps and controlled pairs.

Reliability was excellent. On the initial range session it digested 100 rounds of FMJ and hollow point without issue. The 3.75” barrel is a plus. It’s a full inch longer than most 380’s in its class, giving you greater velocity and accuracy from the .380 ACP round.

Felt recoil is tame, managed by the additional weight of an all-steel weapon when compared to polymer .380s out there which are quite a bit snappier. Magazines drop freely from the Baby Rock without issue making mag changes a snap. The slim profile (.76 inches at the slide) makes this weapon very easy to conceal, even when wearing light summer clothing.

I have been carrying the Baby Rock since it arrived in an Azula Holsters OWB rig that’s custom-fitted for the Baby Rock. Given the gun’s diminutive size and relatively light weight, it couldn’t be much more comfortable to carry. Other companies making Baby Rock holsters include Holsterco, Gunners Custom Holsters, Myholster, Sticky Holster, and many others offer holsters in leather, nylon, Kydex, OWB IWB Pocket carry and other options.

In short, if you’re a 1911 fan and looking for a smaller carry gun with a familiar manual of arms, is accurate and, most of all, reliable the Baby Rock is well worth your attention. While too large for pocket carry, this gun is perfect for either OWB or IWB carry, or even in an ankle rig.

Accuracy: * * * * *
All in all, amazing. Groupings of less than 1.5″ at 7 yards during testing. I expect to tighten those even further after testing with more types ammunition.

Ergonomics: * * * * *
Quite simply, it’s a 1911 in a smaller package. The beaver tail grip safety is excellent and the rubberized grips give you a firm handle on the weapon. Unlike a lot of small .380s, you can actually get your entire hand on the gun and the front and rear slide serrations make racking it a breeze.

Reliability: * * * * *
It just runs. Not one malfunction with FMJ or hollow point ammunition which is impressive right out of the box with no break-in period.

Trigger: * * * * *
It’s crisp, clean and breaks right at five pounds with very little overtravel and a great reset. For an EDC weapon that’s right where you need to be.

Customize This: * * *
There are several grips out there for the Baby Rock already. However being a newer product there is a very limited supply of parts available which I would expect to change as time goes on. Holster options are limited, but available. I found leather, Kydex and nylon options.

Overall: * * * * *
The Baby Rock is an affordable, reliable, compact, concealable, low-priced and, in general, a perfect small carry gun for a lover of the 1911 platform who may not want to carry a full-size 1911 every day. You get the best of both worlds; a compact easy-to-conceal handgun that you can carry anywhere, combined with traditional 1911 style with that trigger we’ve all come to know and love.