Whenever TTAG publishes a review of a firearm that costs more than a thousand dollars, commentators remind readers that there are cheaper guns that do the exact same thing — for less money! That’s like saying a Seiko chronograph does the same job as a Rolex Daytona. Which is both true and irrelevant. (If you don’t agree, save money, be happy.) But there are times when a less expensive firearm is a better choice than a high-end equivalent. Case in point: the next gen Kel-Tec SUB-2000 in 9mm . . . Kel-Tec fashions the SUB-2000 from Zytel, a fiberglass-infused resin famed for its light weight, strength, resistance to abrasion and corrosion, and high melting point. A SUB-2000 may cost slightly less than a GLOCK — made from a Gaston’s own Polymer 2 recipe — but it’s a hardy beast. You don’t have to baby, mollycoddle or protect the SUB-2000 from the slings and arrows of outrageous misfortune. I dropped mine on cement while taking a picture; the Sub-2000 took a licking and kept on ticking. 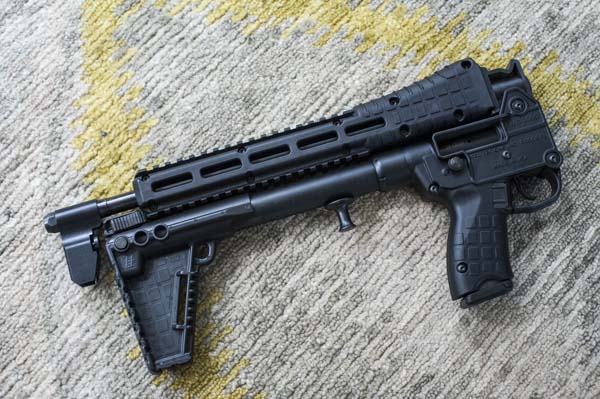 Folded, the 29.25″ long SUB-2000 is all edges and angles, punctuated by Kel-Tec’s signature raised squares. In hibernation mode, the redesigned rifle has an H.R. Geiger feel to it. You can imagine a squishy alien life form emerging from the gun’s business end (depending on how much acid you drop). Wait. Which is the business end? Shoulder a folded SUB-2000 and you’re pointing the barrel straight at your clavicle. A practice sure to give the antis a laugh or two.

Unfolded, the 30.5″ long SUB-2000 makes perfect sense. Unlike the first iteration, SUB 2.0 is svelte as a Swedish swimmer. The picatinny rails adorning the top and underside of the barrel run counter to the rifle’s philosophy of use (a.k.a., ta-da!), but they suit the gun like a Tubi exhaust on a Ferrari. The SUB-2000’s tapered hand guard and M-LOK cut-outs make the rifle look all of a piece — a neat trick for a gun that’s made of two pieces hinged together.

The newish SUB-2000 is better at achieving operational readiness than its predecessor. Position the folded rifle against your stomach with the barrel facing the left. Hold it with your left hand’s fingers on the curved and ridged barrel release. Position your right hand on the grip, pulling the gun towards your body. (Lefties: switch instrux and note that the mag release is port side only.)

Push the release switch out, pull the barrel sideways, pivot your hand around the grip, lock-in the barrel and shoulder the weapon. Take your hand off the grip, slam the slide release to the side (the rifle’s origami precludes leaving one in the pipe). Return your hand to the grip and disengage the cross-bolt safety with your thumb (or index finger if you’re a lefty). Look through the sight. Squeeze trigger as needed.

With a bit of practice, you can be good to go — or stow — in about a second.

And I do mean go. The SUB-2000 tested fed from any 17-round or better GLOCK magazine — or the cheaper, factory-supplied Magpul equivalent. Pop a 32-rounder in Kel Tec’s ballistic bad boy, cycle the action with the metal toilet plunger-like thingie on the buffer tube and you’re ready to drill a single hole in your target at 15 yards or better — depending on your target’s willingness to stay put, your eyesight and marksmanship.

The SUB-2000’s accuracy is a strong selling point; the plastic fantastic carbine makes an equivalently chambered pistol look like a blunderbuss. This despite a trigger with about a quarter inch of no-feel slack, a bit of graunchiness in the final take-up, a fake breaking point and no real indication of exactly when it’s finally going to let loose the dogs of war. Just goes to show what a rifle barrel — any rifle barrel — can do.

Works for me — especially as the 9mm SUB-2000 is about as punishing as a Tempurpedic pillow fight with a Xanax-addled opponent. I’ve read reports of first gen SUB-2000’s suffering reliability problems. This one, purchased at a local gun store, ate a mixed ammo diet — including low-powered target ammo and chi-chi high-grain Golden Sabre hollow-points — without complaint. Unlike Ben Vereen storing his shoes, there’s no need for a tap rack. 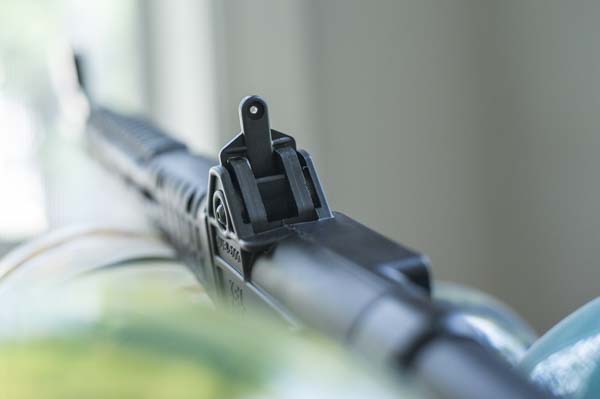 The SUB-2000’s front sights are ideal for the job; the rear sight folds away as you compact the gun. But they aren’t ideal. Peer through the tiny ghost ring and aim the SUB’s black front sight at a black object. The front sight disappears and you’re reduced point shooting. Really accurate point shooting. Even so, the SUB’s sub-standard sights are to a red dot what a butter knife is to a Shun chef’s knife. On the upside, the SUB-2000’s front sight adjusts AR-15-style for both windage and elevation. Bonus! Peering straight down a folded SUB-2000’s barrel to check for obstructions or grime couldn’t be safer or easier. You can add length to the gun’s stock by 5/8″, twice, if needed. The process is a lot harder than cleaning the barrel, but what isn’t? With a little hex wrench work and a six month wait for an ATF tax stamp, you can screw a silencer onto the SUB-2000’s nose, increasing the cool factor by 50.

If that’s even possible. With its innovative design and perfectly judged makeover, the SUB-2000 is the Steve McQueen of ready rifles. Who can’t appreciate a good-looking, soft-shooting, accurate and reliable rifle that stows in a small backpack or a large hamster cage? Yes but — Nine mil is hardly an ideal rifle round. I reckon an SBR AR-15 with a folding stock — or an AR pistol with a SB Tactical brace — is a better trunk gun. If nothing else, they’ve got superior ready-to-go optics and longer range. Then again, the Kel-Tec SUB-2000 is a sub-$400 gun that doesn’t require much care or feeding. It’s almost as discreet and at least as tough as Indiana Jones’ whip, and a lot more useful (depending on what kind of romantic partner you prefer). In fact, the SUB-2000 is like a Seiko and a Rolex Daytona. The first because it’s perfectly practical. The second because you can’t find a new SUB-2000 for love nor money. Despite years of universal huzzahs, Kel-Tec is unwilling to increase manufacturing capacity to satisfy demand. Something about corporate debt, apparently.

The elusive Kel-Tec SUB-2000 is an engineering marvel that’s well worth the wait. In this era of affordable mass production, where designers worthy of JMB’s legacy can take advantage of modern materials and machinery, everyone should have one. And now, finally, I do. The time has come.

Fit and Finish: * * * *
The SUB-2000’s built like a proverbial brick sh*t house. One star removed for a sharp edge on the end of the trigger. How hard would it have been to file that down?

Accuracy * * * * *
For a gun with a nine-pound trigger pull, excellent. One hole at 10 yards, easy. Minute of bad guy well beyond.

Ergonomics * * * *
Everything is right where it should be, including the jumbo-sized slide release. The SUB-2000’s hard, angular butt plate is about as comfortable as you’d imagine, but we’re talking about 9mm recoil. The more ergonomic barrel release switch is welcome, but unfolding the rifle quickly still takes practice.

Customize This: * * *
You can hang a bunch of toys on the SUB snout’s Picatinny rails and M-LOK slots, but why would you? The whole point of this gun is its foldability. I’d like a fiberoptic front sight, but then I’d like a Rolex Daytona, too.

Unauthorized Jeremy S. edit: various stages of the Gen 2 SUB-2000 manufacturing process appear at three or more points in the video above. We learn the most about it at ~20:20 in.