Bond. James Bond. The faux British accent didn’t even sound right inside my head as I spied the little Walther sitting under the glass at my local gun store. I’d been searching for a replacement Walther PPK or PPK/S since trading in my .22 version during the ammo shortages of recent memory. This time, however, I wanted a man’s caliber. Or, you know, a .380 for my man-purse.

The example sitting before me turned out to be a used PPK/S in 9mm Kurz (.380 auto for those of us of a less Teutonic bent) manufactured some time in the 1970s by Interarms. Having spent some time looking for a replacement PPK/S I snapped it up.

The PPK/S, though a derivative of the venerable German PPK, was made intentionally for the U.S. market to comply with the Gun Control Act of 1968 that made a regular PPK too small to import. The PPK/S essentially takes the slide and barrel assembly of the small PPK and marries it to the longer grip of the larger PP. The downside is a slightly larger gun, with an upside of one additional round in the magazine, bringing the total to 7+1.

Next time you see an aging hippie gun grabber from the 60’s, make sure to thank them for helping to introduce one of the most popular pistols of all time to the U.S. market. They really enjoy that.

Benefits of the PPK/S are of course the small size, about 6.1 inches long (though with a substantial unloaded weight of 1.4 pounds).

Reliability is a perceived selling point of these pistols– the original PP series pistols were first produced in 1929 for the German police, so there’s been plenty of time to get everything completely mostly right. In general, this is a gun that will always go bang when you pull the trigger.

The cool factor is undeniably a big deal with these guns. And if you’re worried that a PPK/S won’t satisfy your need to live vicariously through a fictional, martini-swilling POM (Prisoner of Mother England), rejoice! Daniel Craig uses a PPK/S in both Quantum of Solace and Skyfall. The Interarms produced version of the PPK/S differs a bit from original German made guns and the contemporary firearms that were produced under license by Smith & Wesson. The biggest difference comes in the design of the beavertail. On the Interarms version the beavertail is relatively short. I didn’t realize this was any different than any other version until two years into owning the gun. One day at the range I experienced slide bite for the first time. It was fun.

With the Interarms pistol, anyone with a larger hand (or in my case simply a fat, doughy hand) will experience the webbing between their thumb and forefinger slipping over the top of the beavertail and experiencing first hand the joys of being run over by a piece of steel traveling at 25 feet per second. No, it doesn’t hurt very much, but your accuracy goes down the toilet when you start to wince right before every shot. Luckily, a fellow enthusiast victim makes a beavertail extension that works great if you have this problem. These are available for about ten bucks on eBay.

So, how does it shoot? In a word, great. The gun is always more accurate than I am, and once you get used to the surprisingly high felt recoil of a .380 in a small, but heavy frame, it becomes a breeze. In the ease of use department however, the pistol suffers from three mild, but annoying flaws. First, the double action trigger pull is 17 pounds. That’s a hell of a pull, and good luck having your first shot land anywhere near where you’re aiming on a quick draw. After that, single action settles in, is crisp, and feels great. If you take your time with the double action pull it’s possible and actually quite rewarding to see the round land where you aimed. If finger aerobics aren’t your thing, you can always just pull the hammer back for the first shot and save your workout for the gym.

Second, I think the recoil spring on this gun might have come off the suspension of a tractor trailer. Seriously, this thing is stiff. The blowback design of the gun requires a stiff spring, but racking a round into the chamber is doomed to failure if you don’t do it with gusto. Then again, this pistol is only 40+ years old, so I’m still really just breaking it in. I’m sure it will loosen up some in the next 40 years. For those of you who can’t wait a lifetime, reduced weight recoil springs are available from several suppliers.

Third, this gun is a bit of a picky eater. If you peruse the forums you’ll find about a 50/50 split on folks who say their pistols eat anything and folks who experience the issues I have. If the ammunition is round nose jacketed you’re fine. It doesn’t seem to matter what brand of ammo or bullet grain you use. Round nose FMJ will work just about every time. Flat headed rounds will cycle, but expect to have a failure to feed where you’ll need to send the round completely into battery manually every few shots. Hollow points aren’t even worth talking about in my experience, but if you carry this gun defensively, spend some quality time making sure your carry ammo actually cycles. Taking special care when cleaning the feed ramp will also help.

Since owning this pistol I’ve put a few thousand rounds through it of varying types. 95 grain Fiocchi FMJ seems to cycle well, as does 95 grain Federal American Eagle FMJ.

For this review’s range test I used a mix of Fiocchi, Federal and a Bulk Winchester White Box of 95 grain flat head rounds from 20 feet. After shooting about 200 rounds I had a few expected failures to feed with the Winchester rounds, but good luck with the others with no issues. The gun is always more accurate than I am with the exception of the heavy double action trigger pull. Shots from double action are noticeably right for me, while single action is essentially dead on.

While the pistol has a few eccentricities on the range, if you use the proper ammunition and remember that the spring is a fighter, you’re in for a pleasant shooting experience with a looker of a gun that’s bound to get a few jealous stares or some friendly conversation.

Where I live, in the People’s Republic of New York, the seven round magazines are not considered ‘high capacity’ (anything over ten rounds for those of you in the United States). For such a small gun, and with one in the chamber, that’s still a decent amount of lead to send down range before reloading considering how old the design is. If carrying chambered makes you nervous, the pistol’s combination decocker/safety might make you feel more comfortable. That, coupled with the heavy double action trigger pull, means this gun is not going bang unless you want it to go bang. Additionally, holsters of every design are readily available for this pistol. Finding the proper carry rig for you won’t be a problem.

Fit and finish on the Interarms pistol is great. All the parts fit snugly, the action is smooth and the quality is high. Both of my magazines are original, and they still function flawlessly. The only low point is the stock plastic grip panels. Functional, but after 40+ years they’ve smoothed out to the point where my purchase on the pistol is hard to maintain – something I can’t blame anyone for. Luckily, grips for this gun are plentiful and come in a seemingly endless variety of woods, resins, rubbers and fine engraved ivories, golds and silvers if you’re willing to shell out a bit extra. 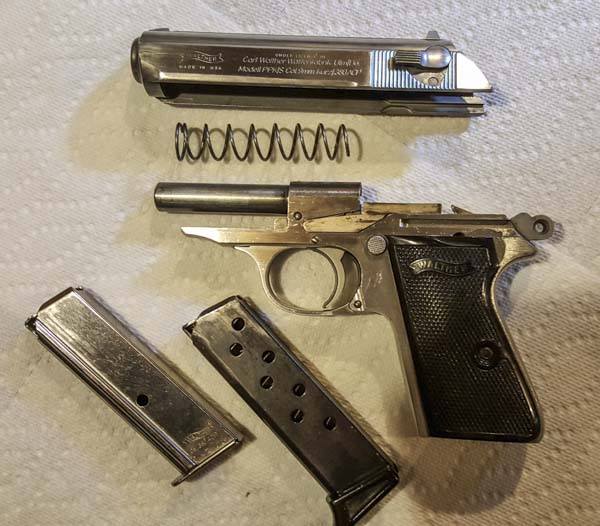 Disassembly is simple, but if you aren’t familiar with the design it may confuse you at first. You must first pull down on the trigger guard, which actually pulls out of the frame (similar to the Makarov design) and then move the slide back and up. This seems very difficult at first, but is much less awkward once you’re used. Pulling the hammer back first makes life much easier. From there, everything is set up beautifully for cleaning. The barrel, which is not removed from the frame, is easily accessible, and the recoil spring and slide are the only two components other than the magazines that detach from the frame for normal cleaning.

Reassembly is simply the opposite procedure.

With the proper ammunition this is a great little gun. While I have since replaced it as my primary carry pistol, many still carry these daily. As a range toy this fits right at home in my collection. Interarms examples of the Walther PPK/S are easily found for a price between $400-$500 or lower, and despite a few flaws, are a version of this pistol I would highly recommend.

Reliability: * * * *
This gun still goes bang when you pull the trigger 40+ years later. As long as you use the proper ammunition you’ll never have a major problem.

Accuracy: * * * *
The first double action pull will go wild if you aren’t careful. After that, it’s smooth sailing.

Ergonomics: * * *
The gun itself is a joy to hold, but that short beavertail will leave you with a chewed up hand if you grip to high.

Customization: * *
You can switch the grips out and replace some springs and other internal parts, but do you really want to change up the Bond gun? What’s wrong with you?

Overall Rating: * * * *
These guns are well made, fun to shoot, and easily found for a fairly low price.