More often than not, when I purchase a firearm I do so for the entertainment value. If I was simply looking for a self-defense firearm, or a carry piece, or some SHTF-scenario/bet-my-life-on-it rifle, I would’ve likely stopped shopping a long while ago. But being young and mildly irresponsible with my paycheck enabled me to buy all manner of entertainment which is what led me to the Henry Mare’s Leg.

I had stopped into my LGS to pick up my latest internet-auction purchase, when I saw the Mare’s Leg handgun displayed on the wall behind the counter. Having seen Woody Harrelson wield one in the film “Zombieland,”

I was immediately intrigued by the ridiculousness of such a contraption. A lever-action pistol doesn’t immediately conjure up the notion of practicality or usefulness as its pretty much a two-handed tool (unless you’re a cyborg sent from the future).

It would not, at first glance, appear capable of being employed accurately. Indeed, when I decided to write this review, I figured I could counter that notion given the ease with which an eight-inch steel plate could be repeatedly pinged at 100 yards but we’ll get to that humbling reality in a later paragraph.

I asked to see the Mare’s Leg not really expecting much of it but working the action and looking down the sights gave me the impression that this cut-down lever-action .22 Henry rifle might have some serious entertainment value. Needless to say, I walked out of the store with two firearms rather than just the one I was expecting. 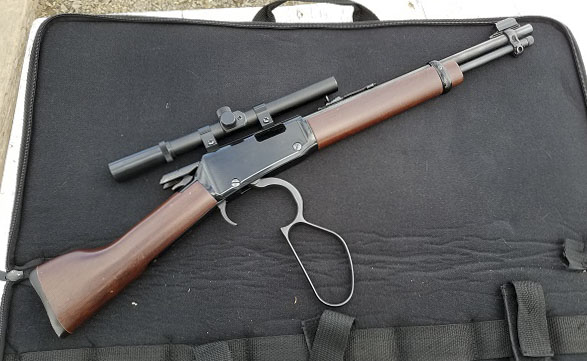 Examining the Mare’s Leg, there is really no question that Henry Repeating Arms simply took their Large Loop Lever Action .22 Carbine, chopped down the stock and barrel, relocated the front sight, and called it a day. That’s not to denigrate or say anything negative about the quality of the firearm.

The action is smooth, and the trigger is both crisp and light. The handcrafted American walnut stock shines under its polish, and all blued surfaces from the receiver to the barrel to the tubular magazine are blemish free. (There is also a version with a brass receiver chambered in 45 Colt, 357 Magnum, 44 Magnum.)

It really is a very nice piece of hardware in both visual and tactile aspects. But no toy can really be enjoyed as a safe queen so off to the range it goes! Shooting the Mare’s Leg has been the most entertainment I’ve had since slapping a 75-round drum into a semi-automatic RPK and lighting up a berm full of clay pigeons as fast as I could pull the trigger. But at a fraction of the cost!

The Mare’s Leg is fed by a front-loading tube magazine which can hold up to 10 rounds of .22 Long Rifle or 14 rounds of .22 Short. Just remember to put the cap back on after loading or you’ll end up dumping a small pile of brass on the shooting bench.

Working the lever as fast as I can lets me snap off rounds pretty quickly but not very accurately. If I take my time and use an attached scope, I can consistently ping an eight-inch steel plate out to 100 yards.

Mind you, to pull that off I have to get creative with the hold over and employ a cheek weld (with no stock to shoulder) in order to maintain a consistent eye relief with the scope.

Using Aguila’s .22 Super Colibrí (20-grain and subsonic) bullets ups the giggle factor. You can hear the hammer fall, watch through the scope as the bullet whizzes down range, and hear it ping off the plate. It’s simply silly that such a thing exists. 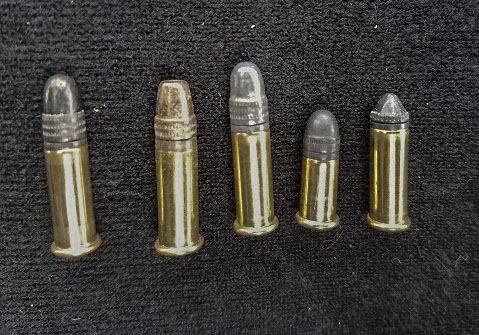 My plan was to shoot at each target aiming for each red dot with a different brand so I could show the difference in accuracy. Using three rounds from each type at 25 yards, I achieved groups from two to three inches which is honestly pretty terrible and likely more my fault than the firearm’s fault.

I did not shoot from a rest and so accuracy testing was not successfully performed and instead I was immediately humbled by my inability to produce reasonable groups on paper. I’ll be sticking to metal plates in the future where I can at least enjoy reliably ringing the target with each shot. Regardless of the feasibility of pulling single-digit MOA accuracy from a lever-action pistol, it is still an entertaining firearm. It is cheap to shoot, feeds all manner of ammunition reliably without fail, and is amusing with every trigger pull.

If one takes the time to control their breathing, take a knee, or otherwise brace themselves so as to be shooting from a steady position, this .22 caliber Mare’s Leg could arguably be used as a back-country varmint pistol though there are probably smaller, lighter, and easier to use options available for such a task.

The Henry Repeating Arms Mare’s Leg in .22 is really just an entertaining novelty. Perhaps if a person is into stamp collecting, it could be the foundation for a very unusual SBR.

If a person has an abundance of time on their hands, they could remove/relocate the front sight, tap and thread the barrel, and attach a can as well and then maybe we’d have something even more entertaining.

But until such time, the Mare’s Leg as it comes is a great bit of entertainment if a buyer is simply looking for giggle factor and I heartily would recommend it as such.

Action: Available in rimfire or centerfire

If your goal is entertainment, this will excel. If your goal is target shooting or varmint hunting, your results may vary. With no stock to brace, and only enough additional space on the grip for a cheek weld, the Mare’s Leg demands steady arms to be used effectively.

From the company’s website: “Now fans of those classic TV Westerns and collectors of innovative firearms can holster a replica of that famous made-for-TV sidearm.” So whether you’re channeling Steve McQueen from “Wanted: Dead or Alive,” or Woody Harrelson from “Zombieland,” a lever-action pistol has plenty of charm as a relatively unique package.

This is still a Henry Firearms lever action and as such is just as reliable as anything they offer. It has so far fired every round I’ve ever fed it and has yet experience any issues.

It’s a lever-action pistol with a scope on it and capable of firing subsonic, light weight (for a .22 even), low velocity rounds. What about that isn’t laughably amusing?

As entertaining as this Mare’s Leg pistol is, it’s not very useful and neither is it free. If you have disposable income and are looking for a fun plinker, I heartily recommend it; but if you’re looking for a varmint .22, or something which can be used as a teaching tool, there are much easier-to-use options out there. The Mare’s Leg is an entertaining novelty but still essentially just a novelty.