Regular readers know that I’ve shot a lot of lever guns, a fair few of them Henrys. The Henry Big Boy Steel in .41 Magnum was a first. I’d never seen a rifle of any kind in this Goldilocks caliber. An oddity or a chance to own something rare, practical and desirable? A little history . . .

The .41 Magnum is,another magnum pistol round developed by the patron saints of packable pistol power, Elmer Keith and Bill Jordan. Unlike the .357 Magnum and .44 Magnums that preceded it, the .41 started life as a magnum cartridge, with a true bullet diameter of .410”. The first factory loadings released included a 210gr JSP moving at 1,350 fps from a 6” revolver, and a 210gr LSWC law enforcement/duty load moving right along at 1,000 fps.

Smith & Wesson’s 1964 N-framed Model 57 was the first gun released in .41 caliber. The revolver failed to catch on; the big frame wasn’t easily handled by officers with anything less than large hands.  It surely wasn’t due to ballistic inadequacy. A starting load with a 210gr JHP is moving faster than the fastest of the 180gr 10mm loads. The 220gr LSWC hits 1,360 fps when pushed to the limit. From a revolver.

In short, .41 caliber is a truly outstanding self defense round, as well as a more than capable woods hunting round in a packable, shootable pistol. When fired from a rifle-length barrel, things really get interesting. That same 210gr Gold Dot Hollow Point round that gives me 1,250fps from my Ruger Blackhawk produces a whopping 1,700 fps from a 20-inch Henry barrel. 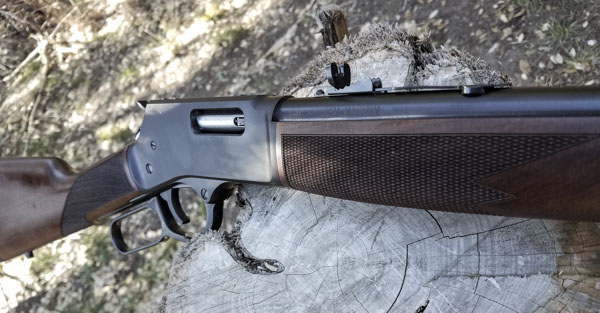 All of that made me wonder why I hadn’t seen a rifle in this caliber. Henry told me that they’re quite popular, with Texas distributors accounting for the majority of the demans. Considering the fairly close-in hunting we do in all but west Texas, that makes sense.

Unboxing the Henry for the first time, I found an attractive, handy rifle. Like all of the Henry Big Boy lines, the 7 lbs. Big Boy Steel in .41 Magnum handles well and points quickly. Fast to shoulder, all of these guns move easily through woods and thickets, and carries easily. The Big Boy Steel comes with sling studs already attached. A real shooter’s sling (not a carrying strap) would be an excellent addition to the rifle. 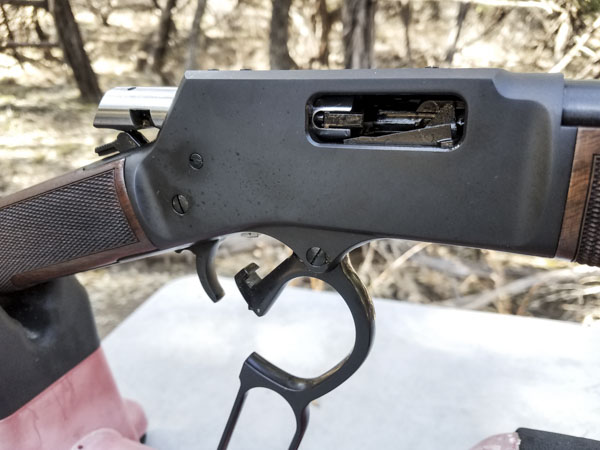 Obviously, the Big Boy Steel doesn’t boast the shine of the Silver Series or Golden Boy editions. The Big Boy Steel steel sports a more traditional business sense. While I prefer the other finishes, the receiver’s subdued blue finish and round barrel make the rifle a classic. The checkered American Walnut straight pull grip stock is well fit into the receiver, finished with a quality recoil pad. Though well-made and well finished, the wood is good quality, not great.

As with the other Henry rifles, there’s no safety. Henry uses a patented transfer bar safety that’s been well proven over time. No “half-cock” position is necessary and the rifle is completely safe to carry with the hammer down. It will only fire if the hammer is fully cocked and the trigger pressed.

Like all the other Henry’s I’ve reviewed save the Long Ranger, the Big Boy Steel has a tube-fed magazine instead of a loading gate. This makes unloading safer; you don’t have to cycle every round. It’s also just as fast — if not faster — to load the full magazine with pistol rounds. And you can load an emergency round through the open action if need be.

As with most of the other Henry rifle’s I’ve reviewed, the Big Boy Steel’s trigger breaks cleanly at just over  four lbs. after a bit of take-up before engaging. As usual, the lever’s action is absolutely outstanding. After a quick lube, there were no significant catches or stops either opening or closing the action.

Recoil with the pistol caliber round is very light. Full magazines of commercial hunting loads were no issue at all, even for my 12-year-old son. This would be an outstanding rifle and caliber combination for a new or young hunter; even prolonged practice sessions are unlikely to produce flinching or poor habits. At the same time, the rifle is still capable of putting down deer, pigs, or black bear at reasonable distances.

The Big Boy Steel’s reliability was flawless. I ran a full 250 rounds through the rifle over two full days. The first 100 rounds were my own handloads: Speer 200gr SWC loaded with 21 grains of H110. The next 100 rounds through the gun were a mix of store bought rounds. I finished with 50 rounds of Winchester Platinum Tip 240gr. HP’s for accuracy testing. Throughout this entire cycle, I had no loading, feeding or firing issues. The Big Boy Steel features the rear sight I’ve come to appreciate on Henrys: a fully-adjustable semi-buckhorn rear sight with a diamond insert. Some models are wider than others, and this one has the fairly wide aperture. That lets you see a goodly amount of the target on either side of the bright brass bead front sight.

Without the diamond insert, this setup would be too broad for accurate firing at 100 yards or greater. However, Henry’s bright white insert allows for finer detail in slow fire or in dim light. Ignoring it still gets your front sight on target for quick shots on running game, as I often require for pig hunting. 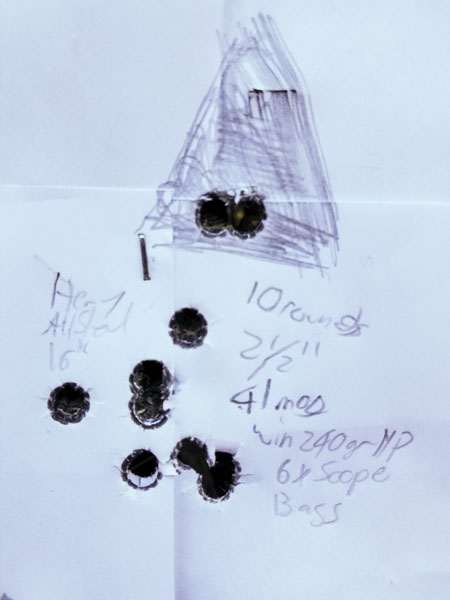 Using that iron sight set-up I scored an average of 4.5” five rounds groups off of game. Since the Henry Big Boy Steel comes ready to mount a scope, I mounted a Weaver K6. Using the scope, the rifle scored a 2.5” ten round group at 100 yards off bags. Appreciating the accuracy, but abhorring the abomination that is glass on a traditional lever gun, I removed the scope, taking no pictures and hiding my shame.

Although I was surprised by the caliber, I wasn’t surprised by the quality or the performance of the rifle. Henry has turned out another classic with the Big Boy Steel, this one in an outstanding caliber.

Style * * * *
I’d partial to the brass receiver and octagon barrels of the Golden Boy and Silver series. This steel version is actually a little lighter and has the working gun look many people prefer. The fit and finish is very good, and the wood to metal fit is perfect. Nothing gleams or shines, but it’s not meant to.

Accuracy * * * *
Good with iron sights and better with glass. At 100 yards, a competent shooter will be able to put it in the breadbasket of game without a challenge. On the downside, if you miss, you can’t blame the rifle.

Overall * * * *
A great gun in an easy shooting magnum caliber; 10 rounds of .41 Magnum moving at 1,700fps is nothing to sneeze at. Easy to move around, infinitely reliable and powerful enough to take thin skinned game at 100 yards.  A star off for the good, but not great accuracy, and good but, not great wood.