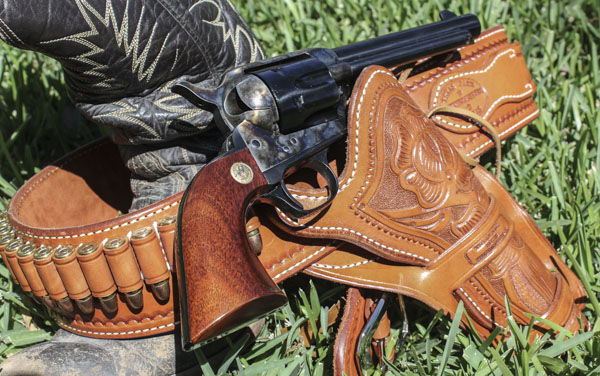 I’ve been married over thirty years now and they’ve been the best thirty years of my life. We adopted our children and the cost of that adoption limited my ability to spend money on things like guns, ammunition, and hunting. But then our kids were gone and I finally found the time and money to spend on the things I wanted to do.

First on the list was buying guns and all the fun stuff that goes with that. I’ve made some progress on the purchasing front, but I don’t yet have an arsenal because all of what I have will still fit into a single gun safe. By my definition, I’ll have an arsenal when I have to buy another safe to store my objects of pleasure.

Last year, when I won a university teaching award that included cash along with the requisite shelf hardware, the question wasn’t whether I would buy a gun, but rather what gun would I buy (note to readers: yes, I am a university faculty member that owns firearms and believes in the Second Amendment – such a creature does exist).

I knew that my kids wouldn’t keep the shelf hardware after I pass away, but they would probably fight over which of them would get the gun that represents their father’s impacts on his students. I wanted this firearm to be a keepsake, but it also needed to be something more than a safe queen. I wanted something with some historical significance, not the latest polyester polymer firearm with a super-duper light-bending and self-correcting aiming mechanism guaranteed to make a hole in the target.

The more firearms I have acquired, the more I have come to appreciate the historical value of older gun designs. While I enjoy shooting my newer guns, it’s the ones that have a long pedigree that I enjoy the most. My 1911, my father’s Remington Model 511 22 caliber, and my grandfather’s Winchester Model 1897 12 gauge.

I finally decided I wanted a six-shooter similar to what John Wayne wore on his hip (AKA Single Action Army, SAA, Peacemaker, Colt .45, or M1873) and started looking at the options. I know I wanted a new pistol, not one that someone else was the first to buy. The choices can be overwhelming.

A true Colt Single Action Army was not under consideration due to availability, price, and reputation. I looked at a lot of other options and the Ruger Blackhawk, Ruger Vaquero, and Urberti Cattleman quickly rose to the top of my shopping list. While visiting my LGS, they asked if I knew about Cimarron Firearms, a Texas gun company in Fredericksburg.

Being a native Texan, I liked the idea of getting my pistol from within the borders of the Republic. As I did my research, I found that Cimarron has a history of providing replica firearms, especially for movies. Their website includes the following about the SAA:

“Considered as the most authentic and highest quality reproduction of the 1873 Colt, Cimarron’s replica was reproduced in every detail from an original 1873 single action in our antique collection, and was not replicated by working simply from drawings, as with previous reproductions. We also took extra steps to improve the gun’s reliability with our Cowboy Comp® action which eliminates weaknesses associated with the 19th century design.”

So the manufacturer was decided, but then the hard work began. There were three different decisions to make: the model, caliber, and barrel length. The choices of SAA revolvers from Cimarron were daunting, with no less than ten different models. After a couple of calls to their retail store, Texas Jacks (see JWT review), I learned that the classic SAA boiled down to a choice between the Model P Old Model (1873-1896) or the Model P Pre-War (1896-1940). The main difference between these is the ease in removing the cylinder. I finally decided to get the Pre-War model so that I could remove the cylinder without having to use a screwdriver.

Next up, revive the caliber wars! The Model P Pre-War revolver is available in six calibers: 32 WCF, .357 Magnum, 38 WCF, .44 Special, 44 WCF, and .45 LC (.45LC also available with a .45 ACP dual cylinder). I originally wanted my SAA to be a 45 Colt to be truer to the early use of the pistol, but after visiting a local Cowboy Action Shooting match, I learned that the .357 Magnum is much better for competition shooting due to the lower recoil of the .38 Special that can also be used with that caliber. As my ultimate common use for this pistol will eventually be CAS, I decided to go with the .357 Magnum.

The really hard decision was barrel length: 4¾ , 5½, or 7½ inch. I had no experience with barrel lengths longer than 5 inches, and with no other information to help me choose, this was a toss-up. I finally split the difference and went with a 5½ inch barrel. I knew I wasn’t going to be trying to win any quick draw contest, which is where the shorter barrel length has an advantage and I didn’t want to try drawing a long-barreled pistol from a holster.

Having finally made the choices, I ordered the Model P Pre-War 5½ inch barrel in .357 Magnum from the LGS and it arrived within a few days. MSRP was $539.50 and I got mine for $489.00. Unlike all the other pistols I’ve ever bought, this one came in a cardboard box, not a plastic case. The pistol was wrapped in plastic with a generous coating of oil throughout. The box contained the usual operator’s manual, promotional material (including a bumper sticker), and a sample packet of Ballistol (a product I swear by). This is a beautiful gun, the best looking one in my safe. First, it has the classic lines of a Single Action Army. The frame is case-hardened steel. The barrel and cylinder are blued steel. The grip is smooth walnut. When combined with the holster and cartridge belt I bought from Texas Jacks, this is a great BBQ gun.

If you are looking for all the latest technology wrapped up in the newest firearm, this is not the gun for you. In the 1870s, this firearm was state-of-the-art. It served as the standard U.S. military service revolver from 1873 until 1892.

The front sight is a fixed blade. The rear sight is a notch in the top of the receiver. It is single action only, meaning you have to cock the hammer each time you want it to go bang. You reload one cartridge at time and unload the same way. 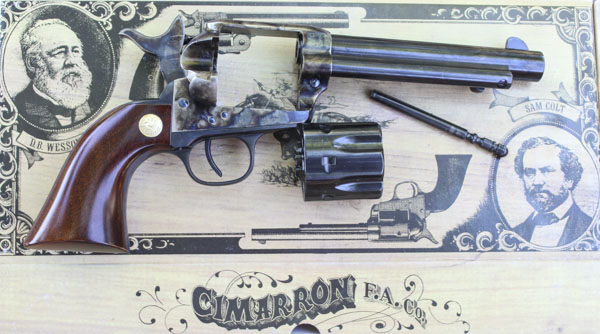 It field strips to three parts: the frame, the cylinder, and the cylinder pin. Field stripping is where the Pre-War Model has the edge over the Old Model, as you can release the cylinder pin with the press of a button. The cylinder pin can be a little obstinate to remove at times, but seems to be getting easier with each removal and with liberal use of Ballistol. Disassembly consists of removing the cylinder pin, opening the loading gate, and taking out the cylinder.

Growing up watching westerns, I always thought that cowboys had six cartridges in their six-shooters. Not true. Turns out that the safety for this gun is to drop the hammer on an empty chamber. To do that, you load one, skip one, then load four.

With the Pre-War Model, you have the option to push in the cylinder pin extra notch to keep the firing pin from contacting a primer. Getting the cylinder pin back to the normal position for firing is not an instantaneous event – at least for me, it takes some finagling. While the smooth walnut grips look great, I’ve found myself wishing for some checkering on hot Texas days at the range when my hands get sweaty.

This gun could not be any easier to use. The hammer has four positions: 1) firing pin contacts the primer, 2) firing pin off the primer (about a ¼ inch away from the primer but not recommended for carrying with a cartridge in the cylinder), 3) half cock for loading and unloading, and 4) full cock and ready to fire. But history and beauty go only so far in a firearm. The big question is how it would shoot. The answer is very well, at least with .38 Special ammo. The recoil with the .38 Special cartridge is light, reinforcing my decision to go with that rather than the .45 Colt.

The photos show some of my five-shot groups freehand, with a rest, and for two other pistols (grid is 1 inch). The trigger pull is extremely light and it breaks cleanly with little take-up. I don’t have a way to measure trigger pull, but it is a fraction of that for any of my semi-automatic handguns. It is so light, that I continue to struggle with getting a consistent grouping, as flyers are not uncommon. The balance of the 5½ inch barrel is good. The classic lines of the grip are a little short for my normal sized hand. Those with big hands may want to go for the Bisley model. 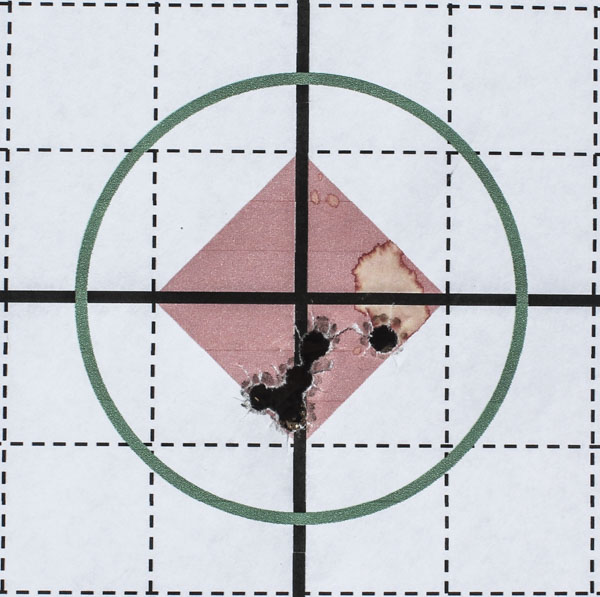 This pistols still has less than 1,000 rounds, so I can’t offer much perspective on the reliability of the firearm. But given that it has been in production for most of the past 143 years, I think the reliability speaks for itself. I have not experienced any hiccups so far.

I have bought a few guns that had to grow on me before I really embraced the firearm. This is not one of those. No buyer’s regret here. I rarely take the same firearms to the range two times in a row, but this will be the gun that goes on every range trip. I just can’t get enough. It is a great change-of-pace from my other pistols and provides a historical reference point that helps me to appreciate how much the science of firearms have advanced since the days of the Old West.

I rate this pistol five stars in several categories because of what it represented at the time it was new. It is my new favorite pistol. I just need to get one more and a lever action so I can start competing in cowboy action shooting events. When I started this quest for a SAA, I knew I would end up with two for CAS competition, but only wanted to buy them one at a time so that my second choice could improve on the first choice. My best endorsement of this pistol is that I will by the same model as my second pistol.

Better than no gun, can use as a hammer when empty.
Speed of Reload: 0 stars

Overall: * * * * *
This is not a self-defense weapon and the ratings consider that.